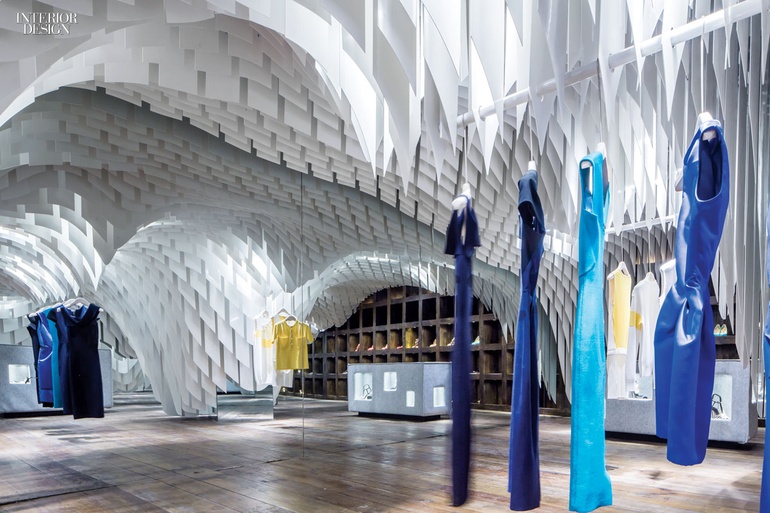 Picture Antoni Gaudí’s studies for the Sagrada Família basilica in Barcelona, Spain. Replace his method—suspending weights on string—with Rhinoceros software to make vaulted shapes. Build them not in stone but in fiberglass. And you start to get an idea of the floating, undulating canopy that dominates the SND women’s fashion boutique in Chongqing, China.

“This kind of curve was quite instinctive when I started to sketch it,” Francesco Gatti of 3Gatti says. He adds that he imagined pulling down on a particularly elastic flying carpet. The result is dynamic.

Layers of white fiberglass sheets descend from overhead to form cozy little spaces connected by a meandering path. Along the route, customers encounter the clothing and accessories, snuck into various folds. Hang bars hover. Surfacing the display cases, begging to be touched, gray felt is meant to replicate the iPad covers carried by the boutique’s clientele. By suspending almost everything from a concealed framework, Gatti freed up an expanse of reclaimed wooden floor planks—a stable anchor for the rolling form above.

Perhaps the undulations were influenced by the geography of Chongqing, known as the Mountain City and located at the confluence of the Yangtze and Jialing Rivers in southwestern China. “You never know with our subconscious—all the information we receive,” Gatti says. The design might even be viewed as a diagram of that subconscious: the emotional ups and downs that he insists are important to the creative process.

Whatever the inspiration of the canopy, it’s undoubtedly meant to attract attention amid uninspired surroundings, the shopping mall at the soon-to-be-completed 79-story Chongqing World Financial Center. Down on the mall’s basement level, SND stands out from such neighbors as Bose, LensCrafters, and several jewelry stores, all overlit, under-designed interiors that match the shiny white hallways. Even the high-end boutiques on the ground level—Givenchy, Prada, Miu Miu, etc.—have bland interiors. Chongqing is not exactly Shanghai, and sophisticated, risky design, it seems, had not quite made its way here before.

The epitome of risk-taking, SND is the inaugural retail venture of three young Chongqing natives. (SND stands for their first names.) The idea behind it was to use an unconventional interior as a tool to persuade international labels, including Antonio Berardi, Ellery, and Ashley and Mary-Kate Olsen’s Elizabeth and James, to send their wares, for the first time, to a city not considered a fashion center. Those names, in turn, would help to convince the mall’s cautious owners to allow the unproven SND to coexist with established brands.

SND managing director Will Zhang says he and the store’s founders hired Gatti after visiting his Shanghai concept store Alter. That antigravity design placed stairs and mannequins on the walls and ceiling, playing with perception in the M.C. Escher mode. “My whole portfolio is like this,” Gatti says. “People who come to me are looking for something special.” He’s now working on a nearby concept store, Zeitgeist, that he hopes will incorporate a field of hemp plants.

By Chinese standards, the four-month deadline to design and build SND was a good amount of time. Nonetheless, it was a rush given the complexity. Fabricating 10,000 unique fiberglass pieces and suspending them—while avoiding HVAC units, sprinklers, and other ceiling systems—proved difficult. It didn’t help that Gatti initially received an inaccurate set of shop drawings, necessitating a rushed redesign.

The goal was to mastermind a sense of discovery, so customers would not see everything on their first visit. “I’m always interested in labyrinths and other complex spaces to challenge visitors,” he says. “My designs offer as much danger as they can.” Without going overboard. Mirrored walls add a bit of reflective confusion, though never to the point of disorientation, and you’d have to be especially paranoid to experience the canopy’s fiberglass sheets as impending guillotine blades. And while there’s a chance of hitting your head on some low-hanging fiberglass, especially if you’re a tall Italian-British man like Gatti, that’s less likely if you’re a Chinese woman.