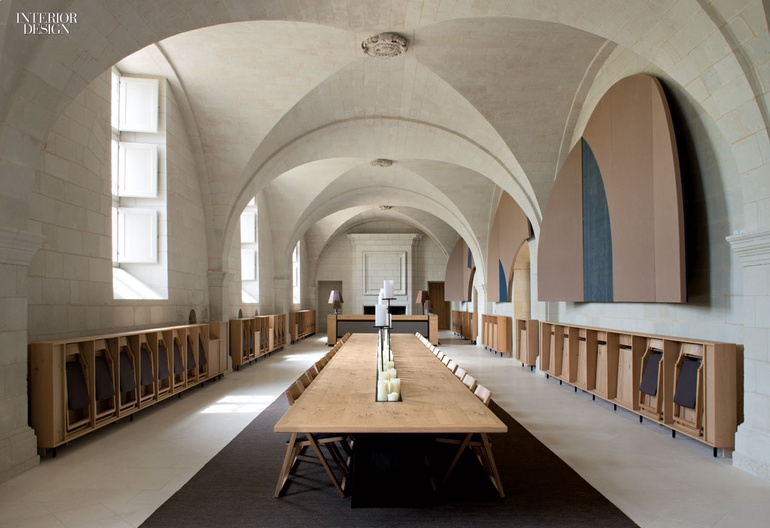 Every now and then, a project drops from the heavens. For Interior Design Hall of Fame member Patrick Jouin and his architect partner, Sanjit Manku, it arrived with a phone call from France’s Abbaye Royale de Fontevraud, asking them to give the abbey’s modest hotel and restaurant a luxury makeover. The Loire Valley site is exceptional, one of the largest medieval monasteries to have survived essentially intact. And Jouin, who grew up nearby, had childhood memories of visiting the abbey church to see the tombstone effigy of Richard the Lionheart, the beloved king of Robin Hood legend.

Founded in 1100 by an eccentric monk who sought to create an “ideal city,” Fontevraud was essentially a double monastery, with separate communities of men and women and, unusually, a woman in charge—more specifically a succession of 36 abbesses, many of them members of the Bourbon royal family. The walled complex eventually comprised four priories with 30 acres of gardens and orchards. After the French Revolution, the abbey spent two centuries as a notorious prison before it was shut down, restored, and resurrected as a tourist destination with one priory converted into the hotel and restaurant.

By the time Jouin and Manku found themselves touring, the abbey had evolved into a cultural and community center with strong ecological leanings: It has a wood-chip boiler and solar panels, uses no pesticides, recycles, composts, and collects rainwater. Along with ambitious plans for concerts and conferences, the regional authority envisioned a hotel and restaurant worthy of the abbey’s august history.

Jouin Manku’s renovation honors the original priory, all creamy white tufa stone with Romanesque and Gothic architecture that is striking for its purity. The new interior also pays homage to the ingenuity of the monks, who made the most of modest resources by crafting clever devices such as mirrors deployed to multiply candlelight. This “monk tech” or “how to kill three or four birds with one stone,” as Jouin and Manku describe it, veers toward interactive screens and multifunctional furnishings. Near-monastic serenity is laced with unconditional contemporary luxury.

To maintain the serene atmosphere, Jouin and Manku confined themselves to a mostly organic palette of wood, linen, wool, and leather, accented by blackened steel. “It’s all simple, beautiful materials,” Jouin says. “It didn’t need more.” Colors are neutrals, from white and ivory to “milk chocolate,” dark brown, gray, and black. The only strong color is a mustardy ocher “chosen almost at random,” Manku says, but later discovered to match the lichen on the abbey’s garden rocks. In keeping with the monastic idea of community, the abbey recruited local artisans for the renovation, including stonemasons, carpenters, cabinetmakers, and upholsterers. Likewise produced nearby are the dishware, notepaper, soap, honey, and even bottled water.

Along with historic-preservation restrictions—most ceilings and walls, for instance, were not to be touched—the biggest challenges were thermal and acoustical. To counter the chill in the restaurant, which occupies the wide cloister ambulatories, a freestanding, removable glass enclosure helps retain heat. The accompanying benches house lighting in their slatted backs, partly compensating for the forbidden ceiling fixtures. One of the few  places in the restaurant where ceiling modifications were allowed is an alcove that once served as the chapter house. Here, the pendant fixtures’ enormous asymmetrical shades are veneered in walnut on the outside to absorb sound and lined in copper to reflect light.

For private dining and other events, Fontevraud l’Hôtel offers the priory’s onetime refectory. A communal table runs down the middle, appropriately refectory-style, while storage racks, for the folding chairs, stand like choir stalls against the walls. On the opposite side of the cloister restaurant is the hotel’s most dramatic feature, the iBar in the literally stone-cold chapel where centuries of nuns knelt in prayer beneath the 35-foot-tall vaulted ceiling. The entire flagstone floor, nonhistorical, was removed and replaced to install radiant heat, and the stretch wool-polyester on the large standing screens also conserves warmth. (For anyone still shivering, wool cloaks are on hand.) In the center of the space sits a long structure combining multiple booths, their leather-covered banquettes flanking tables with touch-screen tops. Less high-tech, smaller tabletops pull out to accommodate extra guests, perched on stools. Though the chapel has been deconsecrated for many generations, care was still taken not to offend religious sensibilities, Jouin notes: “It’s a different kind of bar. It’s quiet. There’s no music, no visible bottles. It can be a gathering place for sharing and reflection.”

The 54 guest rooms, all different but almost all wheelchair-accessible, range from duplex suites, with mezzanines, to cozy doubles tucked under sloping roofs. For comfortable reading, headboards angle outward and downward. Desks are wall-mounted, stools and benches multifunction as side tables, aluminum panels slide to hide flat-screen TVs, and movable sconces hang from hooks—all arrangements the monks might well have admired.