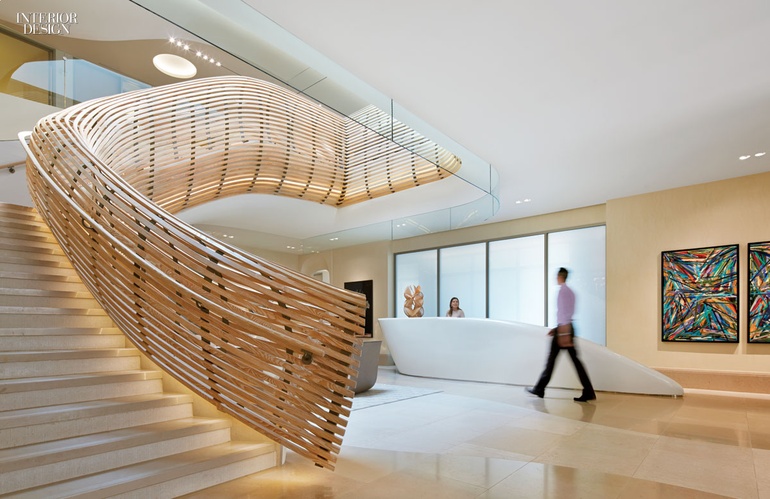 Memorable projects are not in short supply at Belzberg Architects. The haunting Los Angeles Museum of the Holocaust and a technologically dazzling academic build­ing at Occidental College are just two examples. Joan Behnke & Associates, mean­while, has designed houses for celebrity athlete-model couple Tom Brady and Gisele Bündchen as well as members of the Forbes billionaires list. Put Hagy Belzberg and Joan Behnke together, and you’ve got an instant landmark in the L.A. landscape—more specifically a 1960’s Beverly Hills building renovated, expanded, and furnished for a venture-capital firm, the Gores Group.

Its move here was partly due to happenstance. Belzberg started the project with a completely different client, an entertainment law firm. Experimenting with slumped glass for the facade, he’d installed a mock-up in the alley behind the site when Alec Gores passed by. Gores’s interest was instantly piqued—enough to request a tour of the three-story building, even though the attorneys weren’t initially interested in selling, and the interiors were still very much under construction. “We were taking a dark, awful building and opening it up to light and circulation,” Belzberg recalls.

Negotiations ensued, and Behnke, who had designed seven residences for Gores and his family, was brought in to give her opinion. “Hagy’s your guy,” she told Gores. So the property changed hands, with Belzberg remaining at the helm.

Because of the transition to a new client, he explains, “The building was being designed at the same time that it was being renovated.” Part of that involved moving the main entry from a front corner to the back alley,  where there was enough space to add a porte cochere. The alley also runs between the 1960’s building and Belzberg’s ground-up addition. A bridge joins the two volumes, totaling 135,000 square feet.

That glass exterior, unifying old and new, is transparent or opaque to varying degrees. Thanks to the three iterations Belzberg designed for the glass, plus a dozen patterns for the interlayer, almost infinite combinations—and perceptions—are possible for the panels. “They have a kinetic quality as the light changes during the day,” he adds. (Those who say design isn’t rocket science, take note: He began his investigations with a precision-glass manufacturer that also produces aeronautic lenses for NASA.) To counterbalance the eye candy of the shimmering glass, he had weighty limestone blocks hand-finished and carved into similar curves, appearing almost fluid as they round corners.

Inside, there’s hardly a murmur of traffic, blocked by the curtain wall, but there’s plenty of light. Belzberg gave the 1960’s building a triple-height central atrium and capped it with a skylight. The clerestories of perimeter offices contribute as well.

Belzberg and Behnke’s interest in pattern and form is evident in gestures small and grand. “Computer modeling facilitates design at all different scales,” he says. The staircase, a composition of complex curves with chamfered edges, has limestone treads, lit by LEDs, and a curvaceous guardrail of cerused-ash slats. It’s a seductive connector. So much so that most staffers bypass the cylindrical glass elevator, which ascends and descends alongside a carved cerused-oak screen wall. “When I was in Italy, I saw a centuries-old marble facade that was punctured and curved,” Behnke says of the inspiration for one of the patterns in the screen’s evolving surface.

The hourglasslike pattern at the base of the screen recurs in compressed and elongated versions,  for example in the scored limestone flooring throughout and in the rug in the reception area. She describes the swooping reception desk, lacquered white, as a “whalebone.” Equally sculptural are several lighting elements. A trio of cloud-shape wire-mesh ceiling fixtures hover at the entry to Gores’s corner suite. In a conference room, LEDs glow at the tips of the aluminum rods shooting downward from the ceiling above the marble tabletop. The boardroom’s ceiling treatment, the most elaborate, entails an undulating MDF canopy bristling with acrylic or aluminum stalactites, an ensemble that incorporates lighting, speakers, and sprinklers.

Topping it all off, the roof terrace is sheltered by another stunning canopy. This one’s panels of white-painted aluminum were laser-cut in an intricate computer-generated pattern to produce a kaleidoscopic shadow play on the poured concrete—in keeping with Belzberg’s mantra of bringing “architectural innovation” to every aspect of a project. That’s just one of myriad reasons that he’s being inducted into Interior Design’s Hall of Fame this year.