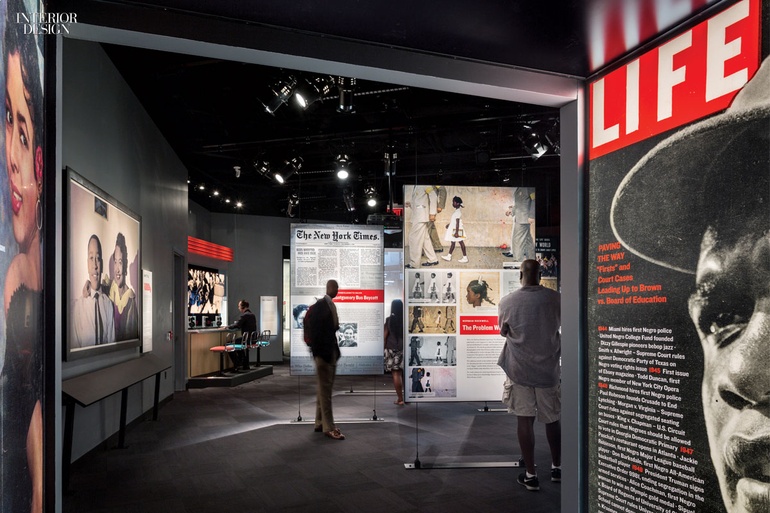 In honor of Martin Luther King Jr. Day, we revisit the landmark National Center for Civil and Human Rights by Rockwell Group and Freelon Group. This project originally appeared in our November 2014 issue.

In a darkened corner of the National Center for Civil and Human Rights, Barry Richards sits at a replica of a segregated lunch counter. The Rockwell Group principal and studio leader, who designed the exhibitions with Interior Design Hall of Fame member David Rockwell, puts on a pair of headphones. Angry taunts, threats, and menacing breathing fill his ears. Even though Richards knows what comes next, he’s still unnerved by it—the physical sensation that someone is violently kicking his stool. This goes on for several minutes. He closes his eyes, winces. When it’s over, he sits quietly for another minute to compose himself. He sighs and stands up, managing to get through it without needing the one out-of-place object on the lunch counter: a box of tissues.

Visitors use up a lot of tissues at this Atlanta cultural venue, as much living theater as museum. The project represents Rockwell’s fourth collaboration with Tony Award–winning director George C. Wolfe, who serves as the center’s chief creative officer. The pair’s prodigious theatrical résumés are especially evident in the experiential “set design” of the narrative of the civil rights movement of the 1950’s and ’60’s. Artfully paced props, video screens, photography, graphics, lighting, recorded voices, and music create dramatic tension, turning a series of black-box galleries into a time-traveling emotional roller coaster that jolts visitors at every turn, from Jim Crow and the Freedom Riders to the assassination of Martin Luther King, Jr.

“We spent a lot of time talking about a technique for telling the story of civil rights in this country, as you might build a  play,” Rockwell says. “George had some interesting diagrams about how to pulse that, like having a kind of intermission with the March on Washington before delving into the country being on fire. We’ve never used choreography in quite the same way. Every surface, every inch of space, tells part of the story, immersing you in the amazing swirl of history.”

Exhibitions fill 18,000 square feet of the three-level building completed by the Freelon Group, now part of Perkins + Will. The structure’s curving front and rear walls create an asymmetrical form that’s legible inside, where Rockwell Group exploited that geometry in the service of effects that are alternately triumphant or disorienting. The journey starts in a tunnel plastered with 1950’s snapshots of everyday life in the New South. All the people on the right are black; those on the left are white. Overhead looms black netting through which fragmented images of burning crosses and victims of beatings are illuminated by popping flashbulbs. In the next gallery, segregationists rant from the screens of precariously stacked vintage TV sets. The segregationists’ deeds and diatribes are printed, in vintage newspaper type, on the walls—particularly ridiculous statements highlighted with the phrase “and I quote.” Jim Crow laws can be searched, state by state, with the help of displays that resemble old-timey train-station flip-boards.

Given that much of the civil rights struggle involved horrific events, discussions about how graphic the graphics should be were numerous. “You don’t want to sugarcoat it,” Richards says. Nor sensationalize it. For that reason, Wolfe decided to present Emmett Till as the sweet smiling boy he was, not as the corpse he became. Key players and events are represented via iconic photojournalistic images and commissioned artwork. A collage of Freedom Rider mug shots covers a facsimile burned-out Greyhound bus. Contemporary stained-glass portraits memorialize the girls killed in the church bombing in Birmingham, Alabama. A 4-by-5-foot photo of someone cleaning up King’s blood still pinches the heart. Throughout, the designers stuck with a palette of newsprint black-and-white with hot-red accents to evoke escalating tension.

The gallery devoted to human rights around the globe takes advantage of sunlight to strike a more measured tone, as exhibits curated by advocate Jill Savitt focus on current issues of genocide, human trafficking, and poverty. On one side, the perimeter wall curves inward, making the life-size silhouettes of dictators mounted there seem all the more oppressive. Opposite this wall of shame is the wall of fame, where oil portraits of such humanitarians as Mohandas Gandhi and Eleanor Roosevelt stare down the forces of evil. In the center of the hickory floor, light-box portraits showcase current defenders.

What Richards describes, in a whisper, as “the heart of the whole museum” is down in the basement, a sanctuary to contemplate King-related artifacts from Morehouse College’s collection, including items from the suitcase he was carrying the night of his assassination, annotated drafts of speeches, and report cards from seminary. (“C” in public speaking, really?) Hickory paneling gleams under low lighting, and a reverent hush envelops the gallery, as King’s most famous words, “I have a dream,” scroll in illuminated text across a black granite wall. They shine bright, then brighter, over and over, in 25 languages.