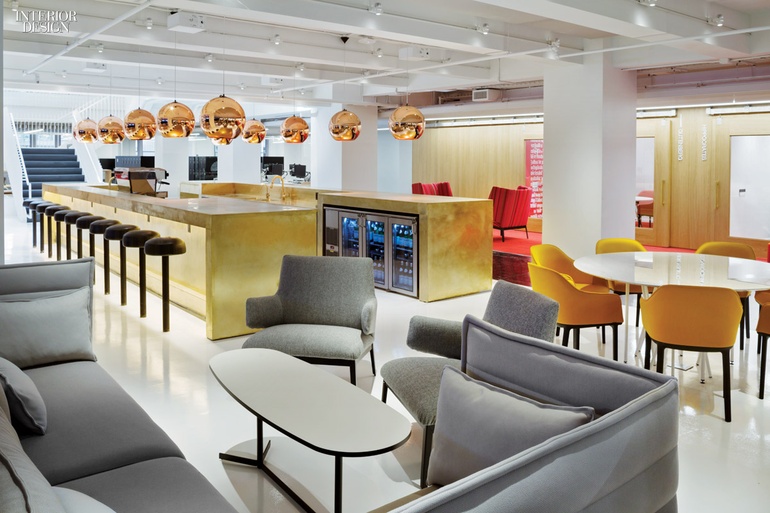 Photos of sweethearts may smile from the screens of corporate-issued laptops, but you won’t see any potted plants, stuffed animals, or Nerf basketball hoops on desktops at headquarters for Gerson Lehrman Group. The New York office’s architect, Interior Design Hall of Fame member Clive Wilkinson, abhors that kind of clutter. “We take the view that personalization of work spaces is a reaction against boring, sterile design,” Wilkinson states. Which he, naturally, would be allergic to providing.

In fact, no one has an assigned seat here—just a home “neighborhood” within the 65,000 square feet. Each neighborhood’s “anchor point” is a bank of lockers capacious enough to stow a gym bag in the morning, then swap it out for office paraphernalia at quitting time. In the hours between, employees wander, landing wherever they feel comfortable. Wilkinson believes that, someday, every single workplace, everywhere, will be configured this way.

Before hiring Clive Wilkinson Architects, Gerson Lehrman Group was split between multiple addresses around New York, with each location subdivided into perimeter offices and cubicles. Hardly a suitable situation for a dynamic consulting firm founded to facilitate communication between its clients, including dozens of Fortune 500 companies, and its 400,000 freelance experts, who provide business advice on topics from law to science. Wilkinson promised “creative space to lubricate the world of knowledge sharing.” But CEO Alexander Saint-Amand initially expressed skepticism about the swoopy dot-com offices that Wilkinson had helped pioneer. “Alexander holds strong views on Euclidian geometry and stated a preference for straight lines and right angles,” Wilkinson says.

An even harder sell for Wilkinson was the aforementioned setup of neighborhoods without assigned seats—a concept officially named Activity Based Working. “It’s simplistic to say it’s just desks and sofas,” he argues. To underscore the point, he went so far as to import Veldhoen + Company, ABW’s most prominent evangelists, to help with change management. As they explained, ABW offices have desks, of course, as well as semi-enclosed workstations like library carrels, telephone booths, assorted meeting rooms, and open cafés to host informal gatherings. It makes sense for employees to switch environment as they spend time typing, talking, and thinking throughout the day. Planning discussions also stressed the important distinction between ABW and hoteling. While hoteling skimps on real estate, based on the assumption that only a certain percentage of employees is likely to be in the office at any given time, ABW provides extra spots, allowing a limited amount of workforce expansion capacity as a bonus.

At Gerson Lehrman Group, that meant a flowing layout with very few walls, so an employee can see across the floor and out the windows. Equally important is the sunlight pouring through the long skylights over the double-height atrium lounge, created by cutting through the slab between two levels of the 1928 office building. They’re now connected by a stair with a floating landing that serves, during events, as a pulpit for speeches. Flooring below is highly reflective white epoxy. “Even on a cloudy day, there’s a pretty immense amount of illumination,” Wilkinson reports. And the white flooring continues beyond the lounge, into the café, with its lower ceiling adding coziness. Energy here centers on a pair of counters lit by rows of Tom Dixon’s copper pendant globes and staffed by a barista. Both here and in the lounge, Wilkinson pushed to bring in seating upholstered in shades of red and orange, as a complement to the corporate red, black, and gray. “You need to extend to a full spectrum of color, because it’s important to the visual  health of a space,” he says.

To warm-up Gerson Lehrman Group’s welcome, the wall behind the reception desk boasts an enormous white GLG that, on closer inspection, is made up of marketing catchphrases spelled out in the small plastic letters usually found on the notice boards outside churches. A team of three spent two days gluing the 3,000-plus characters on large panels—assisted by an overhead projector and painter’s tape. It then took two more days to install the panels. Their blank areas furthermore give employees the opportunity to post messages greeting specific visitors.

Saint-Amand gave Wilkinson an open invitation to drop in and grab a seat anytime he’s in town. But how does the experiment work for employees, day to day? Gerson Lehrman Group has yet to administer a post-occupancy survey to find out where they choose to sit, for how long. Wilkinson believes that most people probably stay in their neighborhoods, though there’s nothing to stop someone getting lost—on purpose.