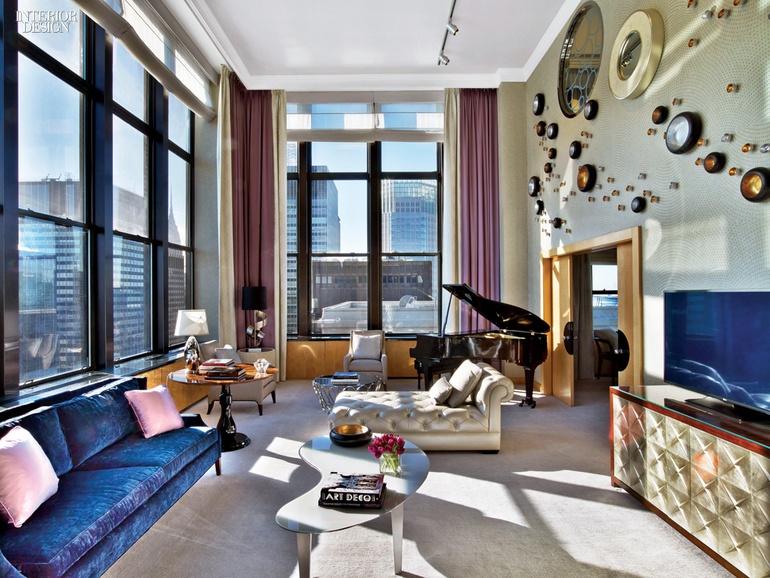 One of the best things about staying in a hotel is that you get to be someone else for a night. And it turns out that to design a hotel well, especially when it comes to extravagant properties, assuming a new identity helps, too. That was certainly the case for Christina Hart as she worked on an eye-popping redesign of three suites, a semiprivate lounge, and a bar at the New York Palace.

One of the city’s most renowned properties, the Midtown hotel incorporates the landmarked houses completed by Stanford White of McKim, Mead & White in 1884 for railroad baron Henry Villard. “We had to get into character,” Hart says of the $140 million, 11,500-square-foot project, particularly the Champagne Suite and the Jewel Suite by Martin Katz, each lavish in its own way. “We got rid of preconceived design ideas and got into the role of a man-cave champagne drinker or an art deco jewelry wearer.” In other words, she had fun with it. The enthusiasm paid off in a series of sparkling settings that infuse glamour into a grande dame.

Hart & Co.—a team that began the Palace project as part BBG-BBGM and finished at HOK, where Hart became senior principal, director of hospitality interior design—handled master-planning for all the public spaces, overseeing four other firms. But her personal responsi­bilities were to redo the deluxe suites and to create the two drinking establishments. The lounge, Rarities, is a richly appointed space for sipping aged Scotch. The more contemporary Tavern on 51, with an entrance from East 51st Street, is the type of casual venue the Palace had lacked.

Hart’s enthusiasm for the assignment didn’t mean there wasn’t an intimidation factor to overcome. “The Palace is under a lot of scrutiny from those who love it,” she says. “How do you make it different without destroying its core essence? We had to stretch ourselves to find the answer.”

There was certainly room for bold strokes in the suites, high up in the 1980 tower that Emery Roth & Sons built above the Villard houses. Reached by private elevator entrances, both are triplexes of more than 4,000 square feet, with 15-foot-tall windows. Both also feature terraces with to-die-for skyline views.

Hart chose to tackle the individual themes somewhat conceptually. Sure, there are necklaces by Martin Katz, a Los Angeles jeweler whose work is renowned for appearing on the red carpet at the Academy Awards, in the suite that bears his name. However, the shiny surfaces, including a crystal chandelier and a wall of mirror, are what truly gets the message across. “It’s about luminosity, reflecting light  just like jewelry does,” she says. More subtly, she employed an amethyst color as an accent.

Celebrating bubbly, abstractly, the Champagne Suite assumes a more masculine air. “You might think you’d go paler up in the sky, but we went deep, dark, and rich,” Hart says of the textured wood and marble surfaces. “As if you’re in a wine cellar.” (Albeit one with windows framing the Empire State Building.) She balanced that approach by adding a golden yellow derived from the Chardonnay grape, the key varietal in champagne.

She made her high-impact moves in the double-height living room. No guests will be able to take their eyes off a black-and-white mural that fragments a view of a medieval abbey said to be the birthplace of champagne. Meanwhile, spilling from the ceiling, a chandelier’s hundreds of glass drops evoke the happy chaos of champagne bursting from an uncorked bottle. Right off the living room, she added some literal wine appreciation, a cellar-in-the-sky with bottles for sale.

Bottles play a major role down in the bar and lounge, where she says she had a clear approach mapped out: “The Tavern is for the  man. Rarities is for the superman.”

In the basement-level Tavern, she adds, “You don’t feel like you’re below.” That’s partly thanks to the gilded or mirrored strips that form a striking horizontal composition on the wall above the banquettes. “Almost an artwork without trying too hard,” she notes. Not to men­­tion that the warm lighting flatters patrons.

The Rarities space offered another chance to go for broke on luxury. Here on the mezzanine of the Villard houses, there were serious historical elements to protect and enhance, among them a sweeping staircase. So she doubled down on the details, even making reproductions of 19th-century portraits to complement the stately oil paintings that had remained as part of the Villard heritage.

Damasks and burgundy tones lend the feel of a gentleman’s club—appropriate since Rarities is members-only, unless you’re staying in the VIP section of the hotel—but the scheme never descends into stodginess. Antiques including plaster-and-marble busts blend with new pieces, the point being that you can’t tell what’s been added by Hart’s subtle hand.

“There are no real ‘power places’ in New York anymore,” she says. “When you walk in here, though, you feel there are big deals going on.” And her reinvention of a true city landmark feels like a very big deal indeed.