They're Onto Something Big: AppNexus's Playful Flatiron Office by Agatha Habjan 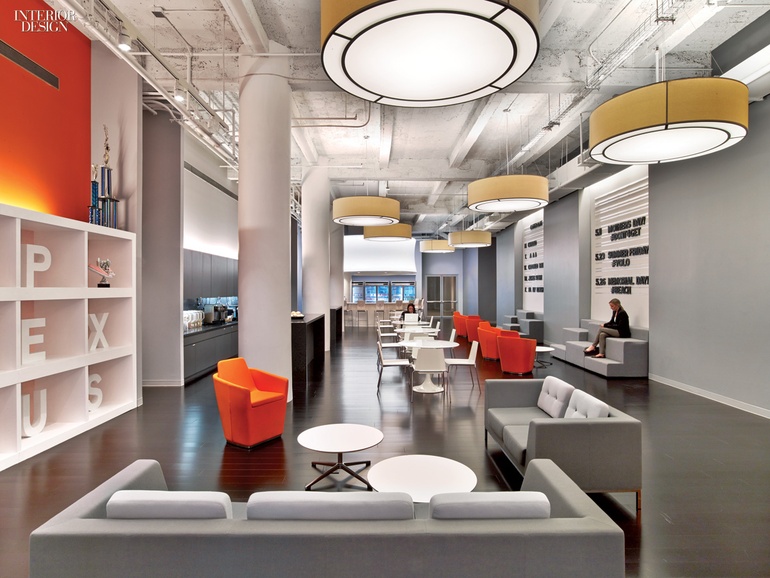 Who can forget Tom Hanks dancing on a giant piano at the toy emporium FAO Schwarz in the 1988 classic Big? Other scenes, set at the toy company where his character worked, were filmed at Mattel’s Flatiron district showroom, then sprawling over several levels of a cast-iron landmark built as a department store back when the neighborhood was known as Ladies’ Mile. After the toy-maker closed that space, the next major pop culture milestone was the arrival of rapper 50 Cent, who rented a studio just down the hall.

A tech start-up, AppNexus, eventually leased that entire level and hired Habjan Architecture and Interior Design for a light renovation. (Along with overhauling offices in San Francisco and Portland, Oregon.) The job included toning down 50 Cent’s kaleidoscopic mirrored restroom by removing his throne in chilly polished stainless steel. But the past was evoked by emblazoning a mirror with one of his lyrics in the form of vinyl decals.

AppNexus thrived in its new environment, growing exponentially as it assisted the likes of eBay and Microsoft with managing their online advertising sales. So the company asked Habjan back to recast another level, downstairs, for 200 more hires. The idea was to make the 67,000-square-foot space a kind of campus, she says, with various types of meeting rooms and informal places to hang out and get creative: “People don’t necessarily work at their desks.”

The result is sophisticated but intentionally not-quite-grown-up. Behold the ranks of vibrantly patterned skateboards mounted on a wall in the reception area—a nod to the young CEO and cofounder Brian O’Kelley’s commuter vehicle of choice. Let’s call them Bart Simpson–approved. Or take what’s universally known as the “cheese wall,” a reference to the Swiss cheese appearance of the large voids carved into this hefty freestanding partition, then outlined with rope lights. The upper  cutouts are painted in the AppNexus corporate color, a vibrant orange that O’Kelley intended as an homage to Princeton University, his alma mater. Cutouts closer to floor level are seating pods upholstered in vinyl in the same collegiate orange. Employees are invited to climb inside and cozy up with their laptops for an afternoon.

Habjan recalls one sofa that arrived in a shade of orange that was infinitesimally off. “You would have said it was right,” she offers. The sofa got returned anyway. Less exactitude was required with Princeton’s other color, black. Ebonized bamboo flooring flows uninterrupted from reception, through a huge café brimming with free snacks and sodas, even free family lunch on Fridays.

The “cheese wall” fronts a lounge lit by festive-looking pendant globes originally purchased to decorate the stage at a half-day conference. Party decor aside, the corner was conceived as a library for the university campus. Habjan did build a few shelves for books, but any academic quality here comes mainly from a ban on cell phone conversations.

Lounge chairs found in the library also appear in sofa form in reception, ready to welcome job applicants with lots of time on their hands. “They arrive very early, because they are very nervous,” Habjan explains, smiling sympathetically. They enter through an elevator lobby where the walls are emblazoned with a graphic text that all good candidates should recognize as script from the original code for the AppNexus platform.

For those who are hired, Habjan provided a training room that looks from the outside like a huge Rubik’s Cube. It’s covered in blocks of colorful self-adhesive vinyl, aside from one swath of wallboard polished to level five before receiving multiple coats of white dry-erase paint. “If anything is white, the AppNexians will write on it,” she explains.

Meeting rooms are strategically placed throughout to divide the rows of workstations into neighborhoods. Each room is identified by a name proclaimed in frosted-vinyl supergraphics:  “Chewbacca,” “Tetris,” “Zelda,” etc. In what has become an App­Nexus tradition, the names were selected by popular vote.

The most unusual communal space is a basketball court installed by a previous tenant. Habjan darkened the court’s floor, and a painting contractor who does work for the NBA freshly applied the colored lines. Most of the action on the court is of a non-athletic nature. For instance, the nonprofit Girls Who Code held a computer-programming immersion workshop for high school students there. Nevertheless, should a pickup game break out, Habjan draped the windows with stainless-steel mesh to prevent an errant shot going through, into the old department store’s light well, and down through the skylight of what is now a Home Depot—followed, of course, by a shower of broken glass. She has obviously learned, as a mother of three, to keep her eye on the ball.