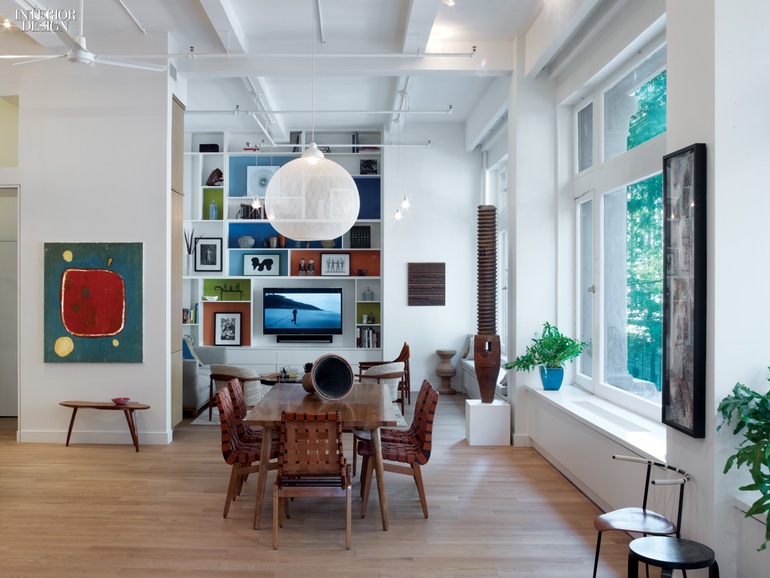 In a classic Gotham real-estate fairy tale, a young mother receives bittersweet news from a beloved neighbor. In this case, a director at Google, Jesse Haines, was devoted to the older British couple who lived across the second-floor landing. Old-school creatives, he was a photographer, and his wife was a ballerina. When the ballerina died unexpectedly, the photographer, his own health failing, announced that he was heading back to the U.K. Would Haines and her husband like to buy the loft? “It was just one of those amazing New York moments when the stars aligned,” she recalls.

Because the Chelsea building was originally a factory, circa 1900, with the second level apparently serving as a showroom, the ceiling is an impressive 13 feet high. “We have great cubage, a word we learned from our architect,” Haines says. Her initial plan was simply to knock a hole in the common wall and keep the construction minimal—especially since her side had been gut-renovated just a few years earlier. But unsurprisingly the project snowballed after she began discussing it with Bryan Min Architect, recommended by another neighbor. Although Bryan Min saved the newish kitchen, simply rotating the island, the hallways and a bathroom were toast. “Walls had to come down,” he says with characteristic understatement.

“You always feel squished in New York, so we welcomed having space to breathe,” Haines adds. Especially since she was pregnant with a second baby at the time. With today’s 3,700-square-foot layout, sleeping quarters have moved out of the front of the floor plate—the part that used to be the Haines apartment—and three bedrooms now form a row overlooking the garden at the rear, replacing the neighbors’ master bedroom, living room, and kitchen. “I remember having tea with them there, and now that’s where my sons sleep,” she says. Guests can stay in a study nearby.

First suggested solely for the new bedrooms, wide white-oak planks were ultimately extended to replace almost all the existing flooring, particularly the skimpy strips of prefinished bamboo that Haines regretted having installed the first time around. The pale wood contrasts with the blackened finish on the monumental steel I beam columns. It was Min’s idea to expose them, stripping away the drywall and brick that had boxed them in.

The blackened finish came courtesy of the interior designers who signed on as construction neared completion. Jayne and Joan Michaels, the twins behind the firm 2Michaels, were dazzled by the industrial character. “We couldn’t believe that lofts like this still existed in New York,” Joan Michaels says. The vastness was right out of the When Harry Met Sally era.

“Jayne and Joan saw the potential in our space,” Haines says. They also saw a way to overcome the limited budget for fur-nishings. “We couldn’t do all the legwork,” Jayne Michaels explains. Instead, designers and client would share inspirations and merchandise via a private board on Pinterest, assembling online to brainstorm at midnight or even later.

One of those shared images sparked the idea to flank the headboard in the master bedroom with two slightly different woven pendant fixtures from Thailand. Haines then took it upon herself to find affordable shipping. She also placed bids on items at auction, with pricing guidelines from 2Michaels, then paid the firm a commission on any lots purchased. To fill out the rooms, Weinberg Modern’s Larry Weinberg, also an Interior Design contributing editor and a close friend of the Michaels twins, dropped by with a van-load of Scandinavian furniture and ceramics as well as mid-century sculpture.

“We couldn’t believe that lofts like this still existed in New York,” Joan Michaels says.

The Michaels twins prevailed in en-livening the den’s built-in cabinetry with a Corbusier-inspired palette and incozying up the master bedroom with blue walls—Haines managed to resist an almost overwhelming urge to repaint them white. “She will tell you she is terrified of color,” Jayne Michaels notes. Not so the resident 4-year-old, whose fanaticism for all things green prompted the cheerful, if unlikely, grass-colored plastic laminate fronting the vanity and topping the bench in the boys’ bathroom. “We kept it a secret, to make it a surprise,” Haines says. And he loved it.

“The loft is really about the kids,” Joan Michaels says. Not only has a large open area en route from the public space to the bedrooms been designated a playroom, but there’s a second one perched, in tree-house fashion, on top of the freestanding volume that contains the study, a bathroom, and an office. When it’s time to go to sleep, the 4-year-old returns to a room where 2Michaels transformed a world map into a mural covering the wall opposite his bed. Picture the room darkened for the evening, as a white-noise machine emits drowsy aircraftlike sounds. In a soothing voice, mom embarks on a cherished ritual with a laser pointer. Tracing a flight path from New York to a far-flung destination, she riffs on whatever geographic trivia happens to spring to mind. Of course, she could also Google it.