Museum in the Sky: Sprawling Midtown Apartment by Hariri & Hariri 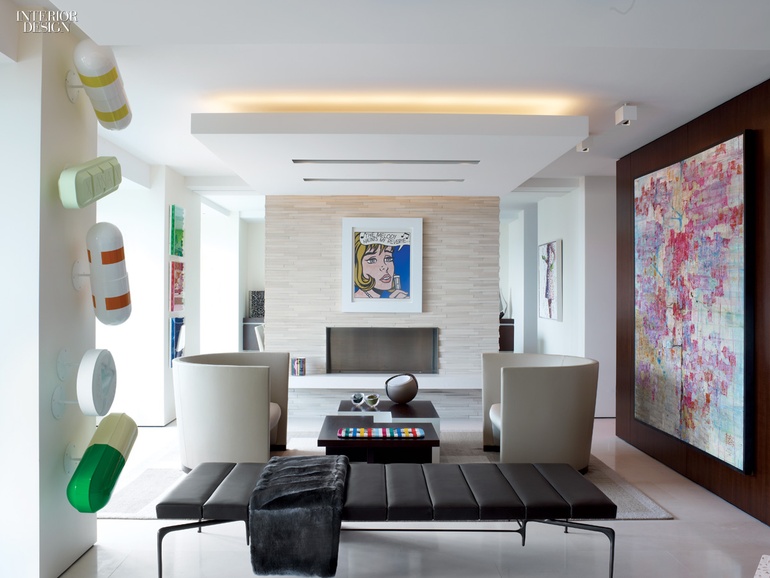 Some pictures are worth a thousand words. And exceptional real-estate photography is worth untold millions in sales in New York. That’s why the bargain-hunters sniff out apartments that look entirely unpresentable online. Take this Midtown co-op, formed by merging two units on the 35th floor of a brown brick behemoth of a certain age. The only interior that the listing even pictured was the building lobby, with beige Barcelona chairs on travertine flooring. The apartments themselves were a no-show.

Instead, the ad highlighted aerial East River panoramas worthy of a private jet. The venerable Ed Koch Queensboro Bridge over the East River is in one direction. In another, Franklin D. Roosevelt Four Freedoms Park, a memorial by Louis I. Kahn, caps Roosevelt Island. No small rewards for someone willing to invest the better part of two years in design and construction.

All traces of the previous occupant, notorious Beatles and Rolling Stones manager Allen Klein, have disappeared. To get a feeling for the place now, you need to speak with Hariri & Hariri’s Gisue and Mojgan Hariri, sisters and Interior Design Hall of Fame members. The present owners “hired us because they were looking for something completely different,” Gisue Hariri says. Standing in the expanded kitchen—big enough for the suburbs, with a table for casual meals and a sectional for watching TV—she hands over a snapshot of the “before,” looking toward the slanted top of the Citicorp building by Hugh Stubbins and Associates. Of course, the ribbon of windows with dated brown-painted aluminum frames is all gone, supplanted by sparkling casement windows with marble sills.

Combining Klein’s two units resulted in a floor-through totaling 4,900 square feet. As the elevator lobby at the core is now private, the Hariris were able to let in some daylight by replacing part of a wall with fireproof privacy glass. In the entry proper is a wall in skim-coated plasterboard laser-cut to produce facets recalling the architects’ collection of crystal jewelry for Swarovski. Overhead, the ceiling sports the same angles.

As whole rooms got demolished for flow, dropped ceilings were installed to modulate space. “Sculpting with highs and lows,” Gisue Hariri explains. The lows, she points out, correspond to cozy zones with plush seating—so guests have the inclination to sit. Lowness was a problem, however, when it came to the placement of the window openings. To camouflage it, a continuous soffit hugs the ceiling around the perimeter.

Flooring in the public zones is now a creamy limestone, complemented by matching paint for the walls and ceiling. “Our design is not just three-dimensional but multidimensional, because we determine both the materials and the colors as we go,” Gisue Hariri notes. Art was also acquired progressively. The architects would insert a piece in their digital models, for review by the owners, then purchase and warehouse upon approval. Even earlier, before construction began, much of the furniture was selected.

“The owners were adamant about color in the art objects, fabrics, and finishes,” Gisue Hariri says. That explains the spirited Florentine blue on the wall in the guest room as well as the Frank Lloyd Wright red for a son’s room. Giant, colorful pill sculptures cascade down a column between the living area and the essentially contiguous den. Gisue Hariri wryly terms the installation an “homage to New Yorkers, all on pills of one kind or another.” It’s also a subtle nod to the apartments’ rocking past.

The living area and den suite was designed “for evenings with one group on the balcony, admiring the sunset, and the ladies over there by the window, sipping wine,” she says. “At this height, you can’t see the street. It’s the building tops and the river.” To separate this area from the dining room, the architects inserted a fireplace—ethanol-fueled, since there isn’t a flue—in a simple stacked-limestone surround with translucent pocket doors on both sides. Over the dining table, a branching Tord Boontje chandelier, sparkling with pink crystal, casts light that’s supplemented by a scattering of tiny LEDs recessed in the ceiling.

Space previously used for dining became a sort of first-class departure lounge for the master suite—more literally a study. There’s a desk by the window and a pair of easy chairs swiveling to face the flat-screen TV in front of the feature wall, clad in limestone tile carved to produce a bas-relief wave pattern that anticipates the master bedroom’s wraparound river vistas. His-and-hers bathrooms and closets occupy space that once belonged to the other kitchen, completely removed to satisfy legal requirements for combining units.

In the wife’s bathroom, beside a window with yet another spectacular view, an ovoid freestanding tub awaits. Backed by the skyline, the tub should look fantastic in a real-estate listing the next time this apartment comes up for sale.