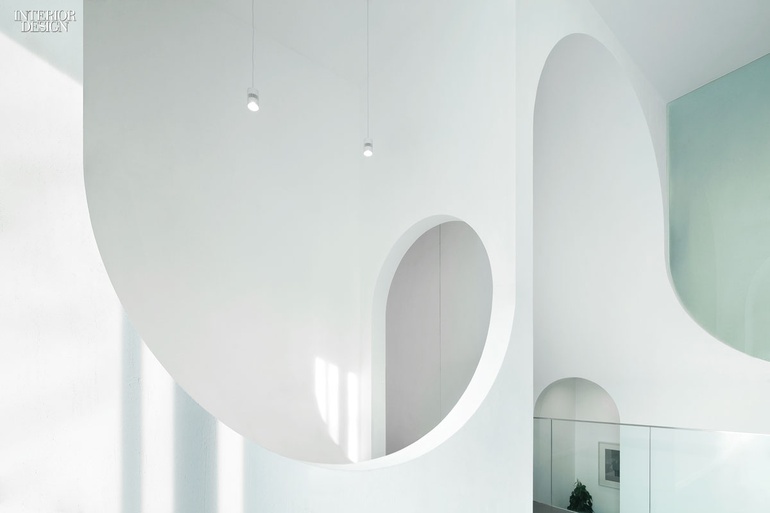 The art of painting stretches back to the dawn of time. Consider the Paleolithic era and the caves of Lascaux in France. PeNDa principal Chris Precht recalled them when designing Beijing’s Hongkun Museum of Fine Arts. Its multiple archways are “derived from the cave,” he says. “The cave was the beginning of art.” Principal Sun Dayong had similar thoughts: “For thousands of years, the cave has been used for making art and conserving history. We tried to find a new connection between ancient tradition and a contemporary way of exhibiting artwork.”

Connecting the past and present is similarly the goal at the Hongkun Museum: showcasing Chinese modern masters as well as pushing the development of the country’s contemporary art. Named for and funded by the Hongkun Group, a real-estate developer, the museum also has a business agenda. The location, despite being near central Beijing, has been largely overlooked, Precht says. At least for now. Projections anticipate an arts district developing here. With this in mind, the architects set out to make their renovation project an icon for the area. The museum’s new facade of rough white stucco, dominated by an arched entry, certainly stands out from the rather drab apartment buildings to either side.

The 8,600-square-foot furniture store that became the Hongkun Museum was gutted. After ripping out the walls and beams, PeNDa embarked on an interiors scheme based on arches and, upside down, counter-arches. It defines all three levels: the main exhibition level, where rotating pieces from the collection are on view; offices above; and a basement offering a secondary exhibition venue and a tearoom. At the entry, PeNDa designed the information desk as if it were a sculpture, fronted by a counter-arch, and from there the multiple arches, differing in orientation, create a continuous gentle line also enclosing the cloakroom and the stairs. “Besides being the language of the interior, the arcs at the front are structural,” Precht says. That’s thanks to their steel frames, concealed by skim-coated gypsum board. The ultra-contemporary super-white contrasts with the dark gray of the floor’s self-leveling poured concrete.

Aesthetic and pragmatic attributes aside, the system of arches takes on metaphorical meaning in the eye of their creators. “The arcs represent mountains, the counter-arcs valleys,” Sun notes. Think a sculptural interpretation of the landscape paintings in the museum’s collection. But how about actually hanging paintings on these curved surfaces? Not a chance. So the exhibition spaces are standard rectilinear volumes that differ only in their materials. In the dark and dreamy downstairs galleries, the walls and floor are completely clad in oak. Ditto for the tearoom, separated from its galley kitchen by another counter-arch. Despite the apparent complexity, the design process was surprisingly simple. Everything was computer-modeled, most of the curves with the same radius. “It made it easy for the contractor to build,” Precht says. That was fortunate, given the time frame, he adds: “We had 36 days from the brief to the opening.”

The project represents an auspicious start for PeNDa—which, in case you were wondering, is a rough combination of the names Precht and Dayong. With founders just over 30, who met while working at Graft in Beijing, the firm is barely two years old. And it just inked the contract for another Beijing cultural project, the Jun Museum for contemporary art. There may well be more to come. In China, a new museum opens every three days.