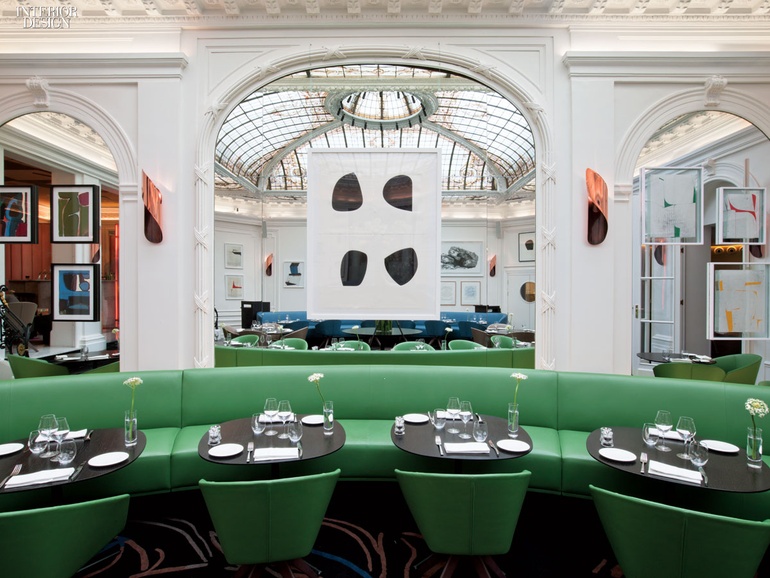 Few places ooze more classic Parisian cachet than the Hôtel Vernet, occupying an ornate belle epoque town house just a croissant’s throw from the Champs-Elysées and the Arc de Triomphe. Gustave Eiffel himself contributed the marquee attraction, the glass-and-iron roof above the restaurant, originally a dance hall. So when François Champsaur’s namesake firm was hired by the new owner, Bessé Signature, to oversee a full renovation of the 50-room property for its 100th birthday, he received one clear directive: Do something Parisian.

For Champsaur, chosen over the arguably more boldfaced Philippe Starck and Pierre-Yves Rochon, the first step was simply to highlight the most compelling details. That meant not just the restaurant roof but also the checkerboard marble floor, the sweeping spiral staircase, and the ele­vator with its wrought-iron cage. Then Champsaur faced the key question: What, exactly, constitutes a new Parisian interior?

A Marseille native with a penchant for quoting Jean Cocteau, Champsaur was adamant about what to avoid. There’d be nothing retro-hip. (“The ’80’s are over.”) Nothing sci-fi. (“As soon as you say ‘futuristic,’ it’s already played-out.”) Above all, he was keen to eliminate the hotel’s “boring” mix of brown and burgundy and the “ancient, dusty” faux Louis XVI furniture.

Instead, he decided, Paris “is about the skills of our individual craftspeople, the furniture-makers, the woodworkers, the people who work with fabrics.” The emphasis on creative traditions makes particular sense because the city has recently undergone “a renaissance of creativity,” he adds. “There are lots of artists, artisans, designers, and architects now. We need to incorporate this movement and show how Paris has evolved.”

He custom-designed much of the Hôtel Vernet’s furniture, which was in turn executed by local ateliers. His dedication to natural materials, especially stone and wood, melds with imaginative free-form shapes and patterns—almost nothing looks like it rolled off an assembly line or was plucked from a showroom. With his personality-rich furniture, one-off decorative details, and unexpected color juxtapositions, the striking overall result complements the eclectic work by contemporary French artists displayed throughout the hotel. (Which just happens to be on the street named after the 18th-century painter Claude-Joseph Vernet.)

The redone restaurant, named the V, sets the tone. To update the vibe beneath Eiffel’s glass roof, from dance hall to living room, Champsaur covered the walls above the long curved banquettes with abstract paintings, prints, drawings, gouaches, and sketches. Original artwork is an essential component of every hospitality project he tackles. “For hotels, design is insufficient,” he says. “You need to bring in poetry, invention, imagination, not just tables and lamps.”

Because the glass roof admits too much sun glare, he absorbed it with a rug that’s largely black. It’s punctuated with blue and beige twig shapes, intended as a modern-day answer to the belle epoque floral patterns painted on the glass. This interplay between overhead and underfoot is another central component of Champsaur’s design. “We took an antique motif and fragmented it, making it more contemporary,” he explains. In the dialogue between past and present, each era highlights the other.

Multiple dialogues unfold in the adjacent lounge, where Champsaur’s vision of art and artisanship is most fully realized. To counter­balance an original mantelpiece in marble and brass, he placed a tall copper screen, pleated vertically like an unfolded piece of paper, at the opposite end of the room. In front of the screen stands a marble bar with an amoeboid form recalling one of his favorite modern masters, Jean Arp.

Even more impressive are the lounge’s contributions from a living artist, Jean-Michel Alberola. On the ceiling, Alberola painted a universe of unusual geometric forms, mostly black or white, floating against a pale gold background that echoes the room’s brass and copper elements. It’s a return to the venerable artistic tradition of artworks as part of the fabric of buildings. “Like the Sistine Chapel,” Champsaur says. For the floor, Alberola designed a rug with blobs and splotches of blue, purple, red, and orange floating on a gray ground. The parallel surfaces seem to respond to each other.

Since period details had disappeared from the guest rooms, Champsaur invented era-appropriate crown moldings and specified sink fittings in unfinished brass that will develop a natural patina as they age. French oak plays a lead role in the form of floor planks, tall headboards, and wall-size sliding doors. His desktops combine blocks of color in a manner suggestive of Piet Mondrian, another favorite. Above each desk hangs a mirror dreamed up by Alberola, the roughly round shape evoking a child’s attempts at paper cutouts. Looking into the glass, guests merge with the artwork and the room simultaneously, creating the ultimate dialogues: beholder with beheld, individual with environment.