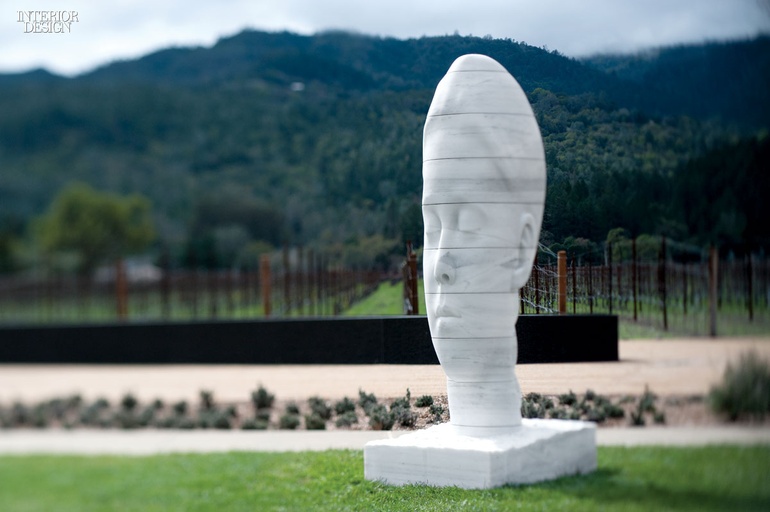 Sampling a glass of wine is gloriously multisensory, as even the most casual of vineyard-hoppers knows. First there is the color to appreciate, then the aroma, followed by the flavor and the feel on the tongue. The sauvignon blancs, cabernet sauvignons, and merlots from Hall Wines, a recent but already acclaimed addition to California’s Napa Valley, certainly offer that experience. And so, in a manner of speaking, does the winery architecture—pairing a restored 1885 stone building with a new glass-fronted visitor center and production facility. Overall, the property blends food and wine with design and the outstanding contemporary art collection of Craig Hall, an investor, and his wife, Kathryn, a former ambassador to Austria with a family background in winemaking.

“We’ve incorporated the works in a non-museum fashion,” Craig Hall says. That meant interweaving the typically separate processes of artistic and architectural creation. Pieces by 26 international artists include 12 site-specific commissions outside and in the two main buildings.

Having demolished most of the outdated existing buildings after buying the vineyard, one of the oldest in the town of St. Helena—on the valley floor with sweeping mountain views—the Halls started over with a site plan by Gehry Partners and state-of-the-art fermentation facilities by the firm in collaboration with project manager Jarrod Denton. The next step was to turn the organic estate vineyards into a destination. That’s when Denton, who subsequently formed Signum Architecture, specializing in wineries, stepped in with a two-part proposal: Convert the 1885 building into an events space, and construct a companion combining visitor facilities with  an open production area. Today, the 30,000-square-foot newcomer, certified LEED Gold, dissolves into its idyllic surroundings.

As it took shape, Shore Art Advisory’s Virginia Shore, also chief curator of Art in Embassies, brought in the artists, many of whom collaborated directly with the architects, landscaping consultants, and vintners throughout the various stages of design and construction. Denton admits that the architect-artist interface took some getting used to. “The construction schedule was aggressive, and the contractors were going at full speed. But the artists couldn’t be rushed—they need context,” he explains, adding that he learned to love the give-and-take. “I’d never before been able to say, ‘Here’s what we have in mind.’ Then the artists give their opinion, and collaboratively we move forward. It’s the way the process should work.”

He actually reframed a wall alongside the main staircase in order to inset the project’s signature piece. Falling somewhere between painting and sculpture, this Josef Albers–esque composition of concentric rectangles in different shades of red, the Hall Wines branding color, is composed of 24,000 layered paper cards. Positioning the piece so high up protects it from stray elbows while boosting its impact. Suspended from the ceiling of the double-height fermentation room, meanwhile, brilliantly colored pinwheel sculptures give it what Shore calls a “Willy Wonka feeling.” They’re set in motion by the existing pneumatic system, a setup perfected with the help of the architects, engineers, and winery staff.

Hanging panels of glass refracting light through the main tasting room, adjacent to the fermentation room’s mezzanine, are part of the contribution from Spencer Finch, one of the project’s best-known artists. The other component is the room’s mural, which looks like a collage of overlapping color blocks. He chose the colors after studying the vineyard’s soil, trees, grass, and light.

Finch wasn’t the only one to develop a palette based on the Napa landscape. That was also the strategy adopted by interior designer Nicole Hollis, whose firm, styled NicoleHollis, developed the winery’s pared-down aesthetic. The one notable departure from the earthy tones is  the vermilion that blazes from the inside of several enormous Ingo Maurer pendant domes in addition to covering the restrooms from floor to ceiling. Branding color or no, Hollis was surprised when the Halls embraced the gutsy concept: “When you come to someone and say, ‘I’m going to do bathrooms that are entirely red,’ and they’re thrilled, that’s pretty amazing.”

Although Hollis interacted less directly with the artists than Denton did, she drew her inspiration from artists in general. “I was riffing on the ones I love,” she says. For example, Anish Kapoor’s Cloud Gate, the beloved reflective “bean” in Chicago’s Millennium Park, sparked her idea for the tasting room’s polished stainless-steel bar, set below Finch’s glass panels.

“Art and design are what draw our guests in and make them linger to enjoy our wines and the beauty of the area,” Kathryn Hall says. “Plus, it’s fabulous for us, selfishly. We love being surrounded by quality work.” And perhaps courting a little local notoriety. Their 35-foot-tall Bunny Foo Foo in polished stainless steel has become a landmark on the Napa Valley’s main thoroughfare, Route 29.