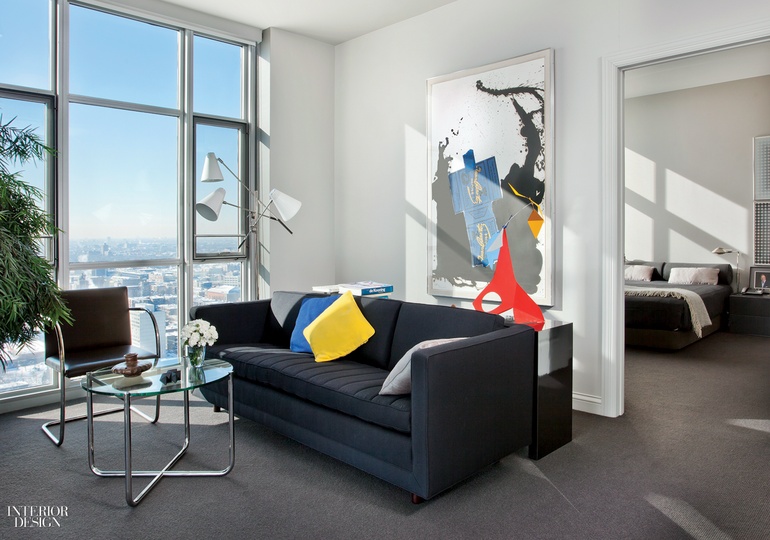 Gracing the pages of this magazine in 1985, Donald D. Powell’s Chicago home was a modernist gem in a Ludwig Mies van der Rohe building. Decades later, when the time came to plan a move out of that apartment, into a much smaller one in a senior living community, he asked his former Powell Kleinschmidt partner and fellow Interior Design Hall of Fame member, Robert Kleinschmidt, to handle the renovation. Kleinschmidt’s first thought on the late-in-life transition: How do you pack so much history into 950 square feet?

The most important aspect of that history, Kleinschmidt decided, was not a particular furniture item or artwork. To make the move into The Admiral at the Lake, Powell was giving away 60 percent of his art collection and 80 percent of his books. (The latter now fit in a single wall-mounted bookcase.) Rather, the new apartment would pay tribute to Powell’s singularly complex understanding of light and its response to neutral tones.

So Kleinschmidt’s current firm, RDK Design, started with subtle grays—running every decision past Powell, of course. Matte finishes minimize reflections from the window walls with views of Lake Michigan. Charcoal-gray carpet makes a contribution both aesthetic and pragmatic: adding to the soft ambience while potentially minimizing impact from a fall.

Curtains in the bedroom are gray flannel. “Don’s favorite suiting,” Kleinschmidt says. And the same fabric upholsters the box spring, creating the look of a platform bed while keeping the mattress closer to floor level.

Powell integrated just a dozen key pieces of furniture and artwork from the past. The Corbusier print was a personal gift from him when Powell was working in the master’s Paris office. There’s a smattering of bud vases always stocked with fresh flowers—a habit picked up from Florence Knoll. And Mies’s Brno chairs, chosen in lieu of the oversize Mies-inspired lounge furniture that filled the old apartment, are likewise Powell Kleinschmidt retirees.

“No two jobs were ever the same,” Kleinschmidt recalls of his 33 years working with Powell. “We learned something each time.” With this project? “Senior living doesn’t have to be dull.”