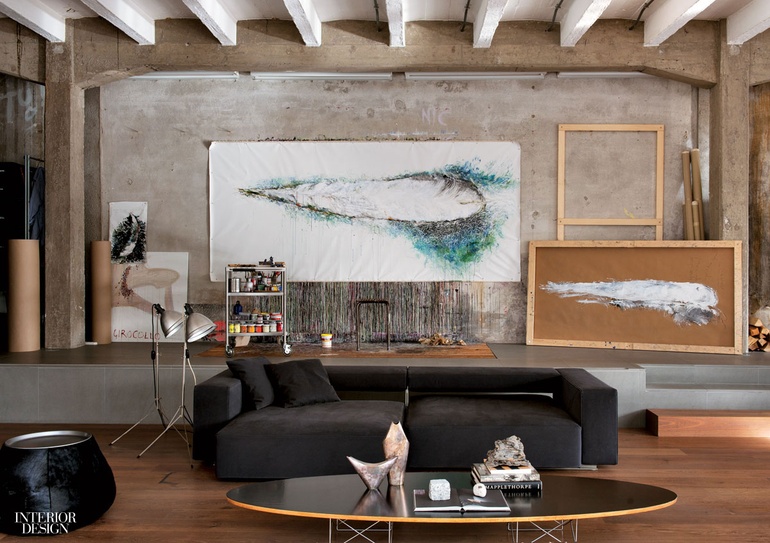 It was a momentous decision. Basta. For Marco Vido, who’d earned his architecture degree from the Politecnico di Milano in 1985 and went on to practice for 25 years in Milan and his native Como, including a stint collaborating with Studio Daniel Libeskind, the time eventually came to explore a new passion, painting. “I bet myself that I could do something else,” he says. “Architecture is a beautiful thing, but it’s always for a client. With painting, the client is me.”

Vido still devotes approximately one day a week to his namesake firm, but he paints almost full-time. “Every day, I feel more alive,” he says. His themes, rendered always in the abstract, are vast: architecture, archaeology, mythology, jewelry, florals and seeds, freedom for Tibet, drought in Africa. There are also haunting crucifixions, despite the fact, he remarks, “I’m not religious.” Working in oil, acrylic, varnish, black bitumen, or graphite, on canvas or paper, he makes many of the pigments by hand.

His art studio is part of the Como loft where he lives with his two teenage children. No, it’s not lakeside with proximity to the exquisite Grand Hotel a Villa Feltrinelli or George Clooney’s spread. The location is near an abandoned railway, bearing witness to a piece of local history, and the space, 2,900 square feet in a 1920’s textile factory, was completely empty when Vido arrived on the scene. He was overjoyed. “It’s difficult to find this type of loft in Italy. Most of them are cut up into little rooms,” he says. “This is like New York.”

Intrigued by the churchlike proportions, a nave culminating in a half-transept where the two bedrooms now are, he was quasi-fanatical about preserving the industrial quality. Walls spattered with the tints used for textiles resemble faded frescoes. “They show the flavor of those who worked here before,” he comments. Exposed concrete beams are original. So are the iron-framed casement windows, immense enough to let in the vast quantities of light fundamental to an artist—the winter winds, too. “The drafts are original,” he jokes.

His major interventions were but three. One was to install dark-stained oak floorboards. Another is a skinny sandstone platform that serves as his studio. The last is an assemblage of plasterboard volumes, painted black or gray, that contain bathing facilities and storage while articulating the division between the public area and the bedrooms. Plasterboard was chosen for its lightweight  quality. “I think of the volumes as Anselm Kiefer sculptures,” Vido says, referring to a particular site-specific installation in an airplane hangar in Milan.

“Yes, this is minimalism, and minimalism can be cold,” he continues. His own interpretation aimed for considerably more warmth—“domestic minimalism,” as he calls it. “Space. Air. To breathe. To dance.” He piles books on the floor and displays mementos on the windowsills. Though there are no doors anywhere, even the bathing area, the various function zones nevertheless possess an intimacy.

Furnishings are either big-name designs, with international acclaim, or custom. The master bedroom’s platform bed and side tables are by Patricia Urquiola, while the living area’s surfboard cocktail table is Charles and Ray Eames. Made in 1960, it once belonged to Vido’s father, similarly an architect and a painter. “I’ve loved it since childhood,” he says. The black sofa accom-panying the table is Paolo Piva’s.

Vido rarely stretches out on it, however. That’s because, if he’s not at the easel, he’s working at the computer that sits on the studio’s long custom desktop in marine-grade plywood—shared with the children when they’re doing homework. For the kitchen, he  designed another long table, in chestnut, that partners beautifully with Hans Wegner’s black-lacquered chairs. Antipasti, pastas, and secondi are prepared at the stainless-steel island.

In continuous flux is the selection of artwork, as pieces depart for group and solo shows. The exception is Barca Nera, representing Odysseus’s ship seen from the bottom of the sea—and consequenently permantly affixed to the ceiling, facing down. Equally constant, though less tangible, is the spirit of rejuvenation pervad-ing the loft. He compares the emotion derived from his second career to the elation he felt long ago as an architecture student, visiting works by Le Corbusier or Gerrit Rietveld.