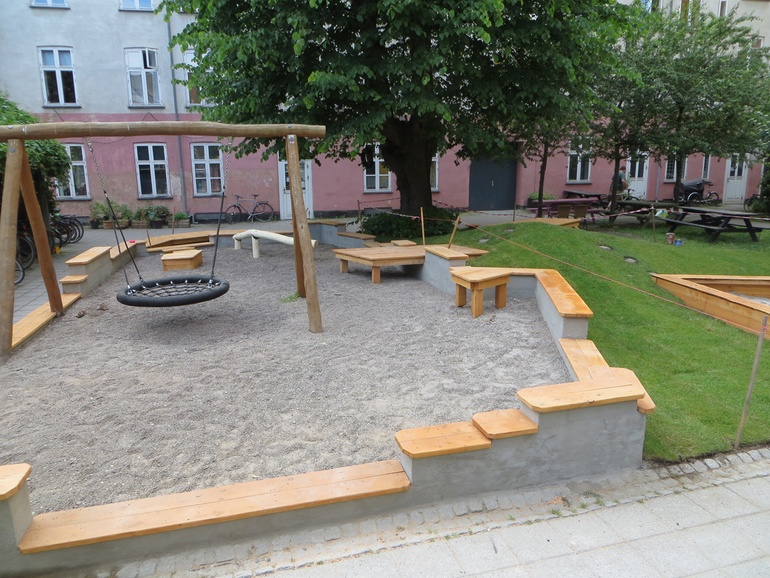 Founded in 2006, the Bureau Detours collective is comprised of several dozen designers and artists across branches in Copenagen, Aarhus, Oslo, and Rotterdam. Interior Design spoke with Bureau Detours co-founder Gabriel Dzieslaw in Copenhagen.

Gabriel Dzieslaw: Street parties are extremely popular all over Denmark; Bureau Detours grew from that aesthetic. There’s this DNA of the street party in our work, and public space issues have always been a part of it, too. We want to make spaces, indoor and outdoor, into something democratic, accessible, and physical but also show people that when it comes to design, you can do whatever you want. You can try things out! You don’t have to be an educated designer or architect to do something that’s playful and inspiring for people. With our work, we’re trying to take down barriers between people, to make people say hello to each other and take part in what’s happening in community around them.

ID: What was your biggest challenge starting out?

GD: Even after we became a proper collective, we were the wild card. We’d apply for funding and get a small portion of what we asked for. We had great energy but budgets were small. But we had success with small projects so we grew and grew. Now we have some money, and people are expecting things to be done in a certain way. You have to be a bit more professional, even if you come from the grassroots.

ID: Where do you primarily work in Copenhagen?

GD: A lot of people live in Norvest. I live on Amager, and a few guys are in Vesterbro. We get requests from people who want to work with us, but in Copenhagen, we have to wait for project to be there. If we don’t have anything, people are not meeting up on a regular basis.

That’s what we hope to accomplish with our biggest Copenhagen project right now, Container By, or Container City—a place where we can meet up, have office space, and set more of a routine, day to day. The only drawback is that the space is seasonal, so at some point, it will get too cold.

ID: What are you currently working on in Copenhagen? How do you hope these projects will add to the city?

GD: We’ve been working on Container City in the Norvest neighborhood for a long time. Eventually, the container village will span several blocks. The idea is to establish a lot of functions in containers: one to be used as a woodshop, one for metalworking, one container to be used as an office, one as a music studio. They’re all mobile so you can take them with you, transport them. For example, we just shipped a container to the Faroe Islands, along with a crew that will build a new project on-site at the G! Festival. Going there—and all the places we work around the world—is a way we can contribute in a place without much in the way of new builds.

ID: In a city full of so many historic structures, why are so many of your projects meant to be temporary?

GD: We’re definitely into the temporariness of things, inspired in part by graffiti, which also has a temporary character. You make something in public and see if it survives. Also, part of it is killing your darlings, so to speak. You create something really nice, but maybe someone will burn or break or steal it.

But we do have more permanent projects. Our new garden playground in Vesterbro’s Westend has a more permanent character to it. And the interior space at Istegade café Kaffe is the most obvious recent example.

ID: When you’re planning a new project, how important is it to reuse and repurpose materials?

GD: Our work has that look to it, but that’s actually a huge misconception about what we do. People think we’re way more into recycling and sustainability than we are. It’s not that we don’t want to be or do that. But actually, we recycle materials when it makes sense, when we have leftovers. When we started out with small budgets, we’d have to upcycle materials that were being thrown out and not the best quality. Now that we’re completing bigger projects on deadline, it takes too much time to find recycled materials.

That said, the installation at the Henry Heerup Museum was more or less 100% recycled materials. It had a unique look, and all of us would like to do that more. It can be difficult to get a hold of recycled materials because you might end up with something you can’t use for stable construction like walls. For the Henry Heerup project, we had connections with people who would store wood, for example. But a lot of the stuff we got was tricky to implement, old wheels from cars, and also plastic elements from playgrounds. It would be nice would be to have library with a lot of materials stored up; then we could use them for projects. Often, we don’t have that privilege. We have a deadline and have to figure out what we need and then order it. We hope the Container City can work as a warehouse space. By building a bigger project, we as a collective can continue to grow.