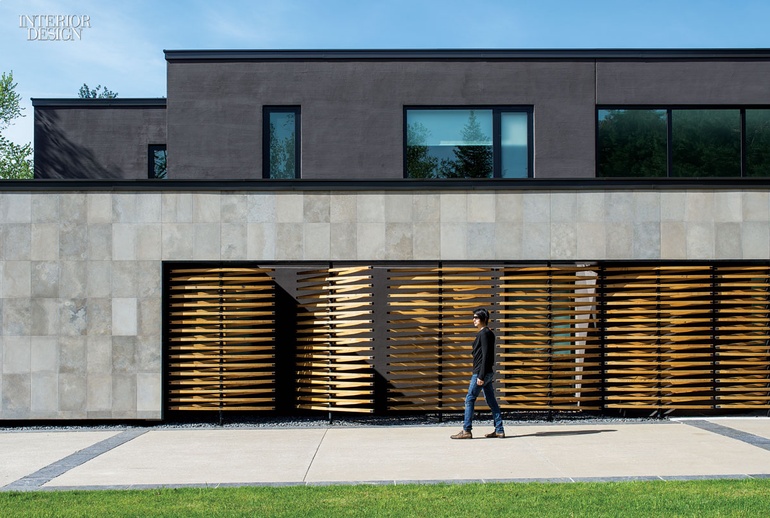 A 1990’s house with a Miami Vice vibe doesn’t sound like a promising candidate for an Asian-accented makeover in sync with nature. To finesse just such a renovation and expansion for a Toronto family of Asian descent, Paul Raff Studio Incorporated Architects relied on screens, minimal yet decorative, to add a layer of richness to the simplicity. You even enter by pivoting a slatted screen, one of the facade’s row of identical Douglas fir screens reminiscent of Korean antique versions.

Behind the facade, which also gained cladding of limestone and raked stucco, the 16,200-square-foot interior features a very different pivoting screen in a dramatic location. To leave the public rooms for the sports and entertainment wing—game room, media room, gym, and 40-foot indoor pool—you must rotate a screen in steel laser-cut to create latticework in an ornate pattern that’s typically Asian. “That screen,” Raff says, “adds depth, texture, and delicacy to a fairly minimal environment.”

Into it floods a lushly treed view, courtesy of the wall of glass sliders in back. The glazing rises 18 feet in the double-height central living room, from which Western-style sofas and chairs have been banished. Instead,  a quartet of floor cushions on a rug exude serenity.

The kitchen is more dynamic, as befits a couple who live to entertain. At one end of the long island, the cooktop and grill are ventilated by two hoods, not one. Ovens and sinks similarly come in pairs.

While the palette of stainless steel and white plastic laminate is in itself subdued, the mood isn’t meant to be, Raff explains: “The idea was to let the stuff of dinner parties—vegetables lying on the counter, brightly colored bowls—be the visual protagonists.”

Things turn positively boisterous upstairs in one of the two children’s bathrooms. Its shower stall is clad in a scintillating mosaic of aquamarine glass tile sprinkled with magenta.