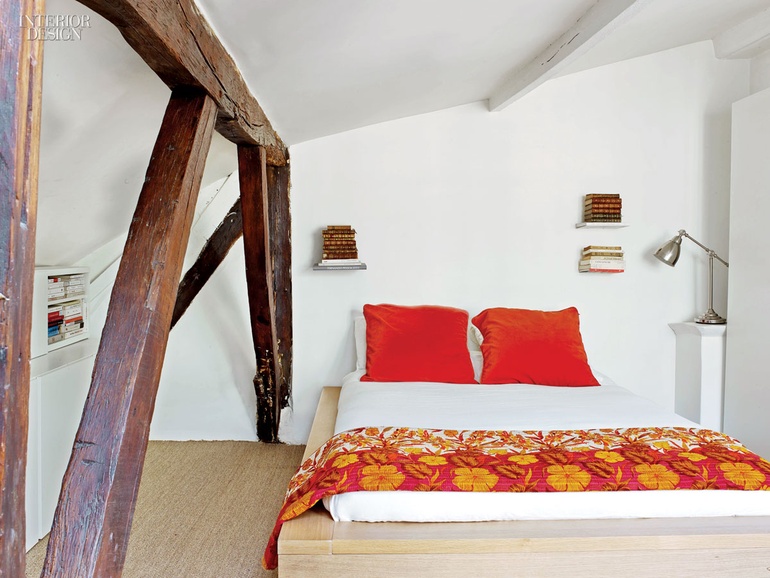 The asymmetrical, angular lines of the peninsula that extends on a diagonal from the kitchen of a Paris apartment, then into its living-dining room, are absolutely not arbitrary, María Martínez Gragera wants you to know. Rather, she explains, “These lines make the room work better.” And she’s an expert where lines are concerned. Besides being the founder of Mariarchi, the former civil engineer is currently a professor of geometry at the École Nationale Supérieure d’Architecture de Paris La Villette.

When Martínez initially visited the 1,100-square-foot triplex, part of a town house from the 17th century, the public space occupying the lowest level was not functioning properly. The longtime owners, a journalist and his political-consultant wife, hardly ever gathered their three sons around the fireplace in the living area, let alone in the tiny corner kitchen. Instead, every­­thing revolved around a table where the parents spent the day working, the children squeezed in for homework in the afternoon, and everyone ate meals. This nexus became a stressful ballet of laptops, books, notebooks, and newspapers as well as dishes, glasses, and cutlery.

So Martínez went back to square one—although the centuries-old walls were in fact not perfectly squared-off but slightly angled, as were the time-darkened wooden columns and beams. She started to sketch, saying to herself, “I’m going to take a fixed point on the far wall, and it’s going to give a new direction to the room.” From this starting point,  in the corner where the enclosed kitchen used to be, she drew a line toward a structural column in the center of the room. The primary path of the peninsula, to be anchored by the column, was thus established.

Positioned on the same axis, back by the wall, a gypsum-board partition rises from the peninsula to screen some of the newly open kitchen from the living area—the cooktop and most of the pale green enameled lava-stone counter can’t be seen. A step down from counter height, the peninsula becomes blond oak. The main part is for dining, while a smaller perpendicular section, between the partition and the living area’s stone mantelpiece, serves as a desktop.

Voilà. Nothing arbitrary about it.