A House For All Seasons: A Retreat For Finnish Architect Anssi Lassila 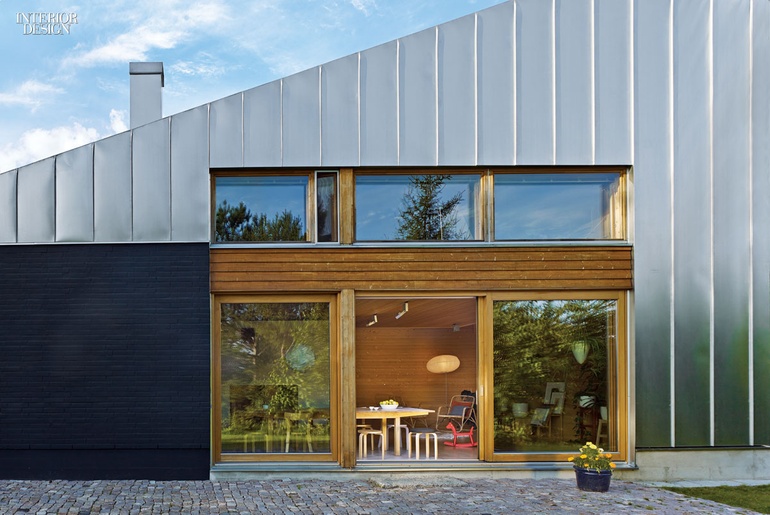 The Finnish pavilion at this year’s Biennale di Venezia contains a simple cabin. Constructed from stacked spruce logs, it was designed by Anssi Lassila’s firm, OOPEAA, standing for Office For Peripheral Architecture. “A contemporary take on a traditional way of building in Finland” is how curator Juulia Kauste, director of the Museum of Finnish Architecture, describes the cabin. “The use of interconnecting logs, which can be easily moved or repurposed, is one of our longest-standing practices. It’s as key to the conception and execution of Lassila’s installation as it is to the sauna at his country place.”

That sauna is housed in a 19th-century granary built with spruce logs and, indeed, transported in the 1940’s from a different location to the present site, a rock outcropping amid rippling fields of barley in rural Soini. Subsequently used as a barn, it fell into disrepair before being reborn as Lassila’s sauna. He restored the exterior and added a deck, partially sheltered by a pergola, and an outdoor tub—all in spruce, which will slowly weather gray. Inside, the smoothness of the new spruce ceiling, duckboard flooring, platforms, and benches makes a pleasing contrast to the rough log walls.

Floor space, 170 square feet, is ample for a sauna even by Finnish standards, while the ceiling is high enough, 11 feet, to provide appropriate temperature zones for sitting in steam or dry heat, washing, and relaxing. “In winter, a sea of vapor floats in the lower portion,” he reports. “It’s a beautiful effect.”

As was the case with the Venice pavilion, his drawings for the sauna were quite sketchy, with many of the details left to be worked out with the carpenters during a brief hiatus from a larger enterprise: designing the main house, a short walk down the hill. The property, a mix of farmland and woods, has been in his family for six generations. “My parents built a very simple flat-roofed house there in the ’70’s,” he explains. “My original plan was to renovate. It was in such bad shape, though, that we basically pulled it down.” Recycling what he could of the brick, he proceeded to construct a new house on the existing foundation.

The predetermined footprint and materials certainly didn’t constrain his creativity. “I’ve always been interested in agricultural buildings,” he says. “The idea here was to give a similarly simple structure a more expressive shape, as necessitated by the internal volumes.” To accommodate double-height living and dining areas, a freestanding enclosure topped by a laid-back loft-style family room, and a second-story guest room, the roof angles up toward the rear. Kauste notes of the striking silhouette, “A sense of sculptural form is typical of Lassila’s work.”

Leaving behind the zinc of the roof panels and the black-painted brick of the facade, oiled spruce dominates the 2,300-square-foot interior. Accents include the birch plywood of the loft’s parapet and the white-painted plaster of the enclosure beneath—cutouts prevent it from appearing unduly massive. (It’s 15 by 19 feet, enough to contain both a staircase for the loft and a fireplace for the living area.) Polished concrete flooring in the dining area and kitchen is a pale gray. Expansive windows and sliding glass doors keep the environment bright.

The single colorful object in the house is a teal freestanding bathtub. Its waterproof companion is Verner Panton’s slinky namesake chair in white molded polypropylene, but most of the furnishings are very low-key. A futon on the floor up in the loft offers adults a place to stretch out and read and gives children a base for constructing Lego cities. In the dining area, Alvar Aalto chairs and stools surround a birch table. Rattan armchairs, breezily casual in warm weather, offer fireside comfort when the temperature drops.

To raise the family’s spirits during Finland’s darker months, halogen track lighting that evokes the warmth of summer is supplemented, in the living area, by a floor lamp with a diffuser of white ripstop nylon that inflates slowly to become a glowing sunlike orb. To keep everyone warm, Lassila installed radiant-heated flooring and triple glazing. “The house isn’t big or luxurious, but there’s enough space for the family and several guests without losing a cozy feeling,” he says. Sounds suitable for many generations to come.