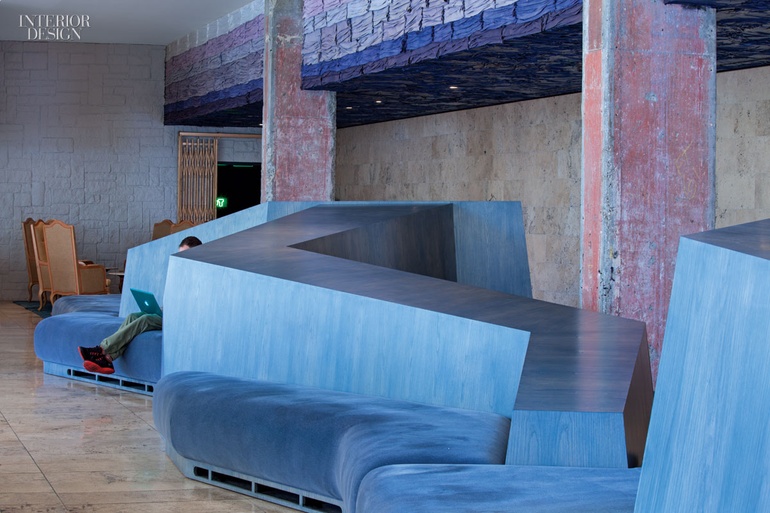 The first question is obvious. How did Sean Knibb ever land a hotel gig? Primarily a landscaping consultant, he had a few residential and restaurant interiors under his belt but zero hotel interiors experience when the call came from Sydell Group, the developer of hip properties in California, Arizona, and New York. The project in question, to be called the Line Hotel, would involve Knibb Design renovating the Wilshire Hotel, a high-rise built in 1964.

So, what’s the answer? In two words, Roy Choi, tapped by Sydell to handle the Line’s culinary component. Now famous enough to merit a cameo in Jon Fav­reau’s film Chef, Choi helped launch L.A.’s food-truck movement with his Kogi BBQ, a Korean-Mexican taco sensation. He went on to open non-mobile eateries designed by. . .you guessed it.

“Roy said you were the best,” Sydell CEO Andrew Zobler told Knibb on the phone. After that opener, the designer says, “They asked me for a proposal. I hung up, got in my car, and drove to the hotel.” It’s in the heart of Koreatown, appropriately. After that, it was an about-face to his studio and immediate work.

Knibb might not have designed a hotel before, but he calls himself “a hotel guy—that’s what I check out when I travel.” For him, the hotel experience is more about the guest rooms than the hipster public spaces, and that’s what he concentrated on for his presentation.

“It was going to be human-scaled,” he says of his guest-room proposal. “Nothing to do with the movie business or celebrity.” He drew inspiration instead from the beach, the mountains, and the city. “A true California hotel with a mix of surfing, skateboarding, Spanish colonial style, Latino cultures.” And let’s not forget  mid-century modernism. His 15-foot-wide presentation panel nailed the job.

Retaining the 383 key count, he moved around internal walls to expand bathrooms and add closets. Except for the 22 suites, the rooms are small, around 300 square feet. Expansive city views counteract the tight quarters.

Uniformity, he determined, would be essential. What to do, then, when he found that some of the walls were concrete but not all? (His low-tech dis­covery method: banging on them and peeling off layers of wallpaper and plaster.) His solution was to custom-design wallpaper that’s a dead ringer for the real tough stuff.

He filled each room with the same cool furnishings: a king-size platform bed in ash veneer, a subtly gray-striped cover on the duvet, a simple two-arm pendant fixture with reddish-orange linen shades. In the suites, sitting areas got Indian-style ottomans, chairs covered in what looks like a Mexican blanket, and a sofa in gray fabric that’s, surprisingly, tufted on the seat and back but loosely draped over the front and arms. For artwork, he commissioned photography of “voyeuristic landscapes,” multicolored collages, and abstract steel wall sculptures that look vaguely modernist.

Even more striking is the wall sculpture downstairs in the intimate reception area. What looks like an assemblage of carved wooden tribal masks is actually composed of forms cut from plastic water jugs and rendered ebony with layers of paint. In the foreground is the reception desk itself, fronted with aluminum panels anodized a deep burgundy.

By tucking reception away to the side, Knibb left the immense lobby free. Clearly, it needed breaking down and re­finishing. New concrete-filled travertine keep steps with the building’s brutalist vibe. Camouflag­ing what would otherwise have been a plain drywall soffit, meanwhile, is a highly unusual treatment derived from his landscape design. “I had been  making stools by compressing T-shirts in a baling machine,” he explains. Here, they’re dyed cobalt, indigo, or pale blue-gray and arranged in overlapping layers.

Below the soffit, azure-stained plywood banquettes zigzag between structural columns. The angles create nooks that are great for groups—and equally fine for semiprivacy if a guest working alone craves an alternative to a lonely room. Single seats are iterations of the classic wing chair, covered in burlap with orange piping.

Axminster rugs with frayed edges and a 1930’s iron chandelier define islands in the sea of space. The real anchor, however, is the bar at the back. It’s another stained-plywood construction, faceted, with a hefty black marble top.

The wall behind the bar separates the lobby from Choi’s restaurant Pot, double entendre intended. There’s a dried marijuana leaf on a wall at the entry, while the kitchen prepares hot-pot staples of Korean cooking. Knibb designed tables with individual cooktops to help make that happen. He went off-menu, though, with the delicate wall decor, dried flowers pressed into the plaster. “It was the only way I could bring plants into a partly below-grade environment,” he says.

There’s no shortage of greenery or sunlight up at Commissary, the poolside café. Housed in a glass structure, it’s essentially a greenhouse complete with lighting affixed to eucalyptus branches and a long pine-topped table fashioned after an Edwin Lutyens design. Food offerings focus on fruit and vegetables, garden-fresh naturally.