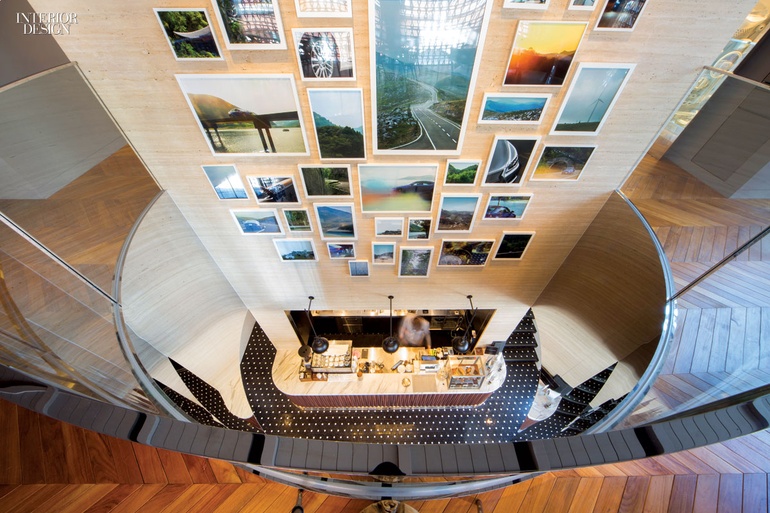 To understand the thinking behind Intersect by Lexus–Tokyo, Wonderwall principal Masamichi Katayama suggests imagining a Niketown that doesn’t sell athletic wear. You pass through the glass doors, expecting running shoes and soccer jerseys. Instead, you find a café, a restaurant, and a gallery. Yet oddly, the more time you spend there, the more you discover yourself longing for the missing items—or, rather, for the active lifestyle imagined to go along with them. The brand has captured you.

Wonderwall, which has in fact designed retail spaces for Nike as well as Uniqlo, was contacted by Lexus, the high-end division of the Toyota Motor Corporation, as part of a marketing makeover. Although luxury and impeccable craftsmanship had always been givens for Lexus, its cars were missing the mark with hip, young buyers. The average age of a Lexus owner had risen by 15 years since the 1989 debut. In Japan, furthermore, those owners were at the wheel less often than their chauffeurs were. Not trends the company embraced. “Lexus should be a car for the young at heart,” Lexus public-relations manager Tetsuya Kawabe says. “Our brand mission is to be cool and edgy.” So Kawabe rolled out a creative campaign to revive the Lexus mojo. The company inaugurated a high-profile design award at Milan’s Salone Internazionale del Mobile and, back in Tokyo, participated in a film festival of shorts by up-and-coming directors. Of a piece with these efforts is Intersect, billed as a “luxury brand experience space” that communicates key concepts in nontraditional ways. “We’re erasing the feeling that it’s Lexus giving the presentation,” Katayama explains. “It’s more like a friend with a Lexus has invited you over.”

The “friend” lives in a small glass-box building in Aoyama, the heart of high fashion in Tokyo. More specifically, the 5,000-square-foot Lexus space is split between the ground level, the second story, and the basement. (A hair salon by Wonderwall is on three.) A café immediately past the entry invites passersby inside. Once they sit down to their carefully brewed cup of Norwegian coffee, they may glimpse a concept car parked in the “garage,” a gallery beyond. Or they may not, since the cars are frequently displaced by exhibitions of art or furniture. In either case, the brand experience will have begun. Upstairs, the potential car buyers can dine on freshly plucked salad greens in the more formal restaurant or peruse scarves and totes in the adjacent boutique. Only those fortunate enough to be invited to a private event will descend to the basement lounge, modeled on the wine cellar of Toyota president and CEO Akio Toyoda’s favorite restaurant near the German racetrack where Lexus tests its cars.

This sequence of clubby spaces, meant to conjure the ideal lifestyle of a Lexus driver, evolved from brainstorming sessions on the habits and possessions of the imaginary Mr. Lexus. Katayama describes this dashing gentleman as “elite and cultured but a little playful, a bit of a bad boy.” (As for Ms. Lexus, we can only hope her turn will come at the similar showcases Katayama is designing for Dubayy, United Arab Emirates, and New York.) What would Mr. Lexus eat? What would his living room look like? His garage?

While embodying Mr. Lexus, the resulting aesthetic also brings to mind a car that has magically, tastefully metamorphosed into an interior. Tabletops are the same lustrous carbon fiber used for the shell of the LFA, a $375,000 sports car. Mosaic tile flooring and carpet incorporate the logo’s stylized L. Less instantly recognizable, screens behind the window walls are composed of interlocking hourglass shapes from the  radiator grille and laminated with bamboo that can be custom-ordered for steering wheels. And the stairwell effectively turns a Lexus inside out, with hundreds of engine parts lining the walls.

Only in restrooms can visitors fully appreciate the playful side of Mr. Lexus. Toy cars of every imaginable make and model cover an entire wall and the ceiling, too—reflected into automotive infinity by the mirrors. “People forget why they went in to start with,” Kawabe says. “They stay, look at the toy cars, touch them.” If that’s what it takes to sell a real Lexus, he’s happy to oblige.