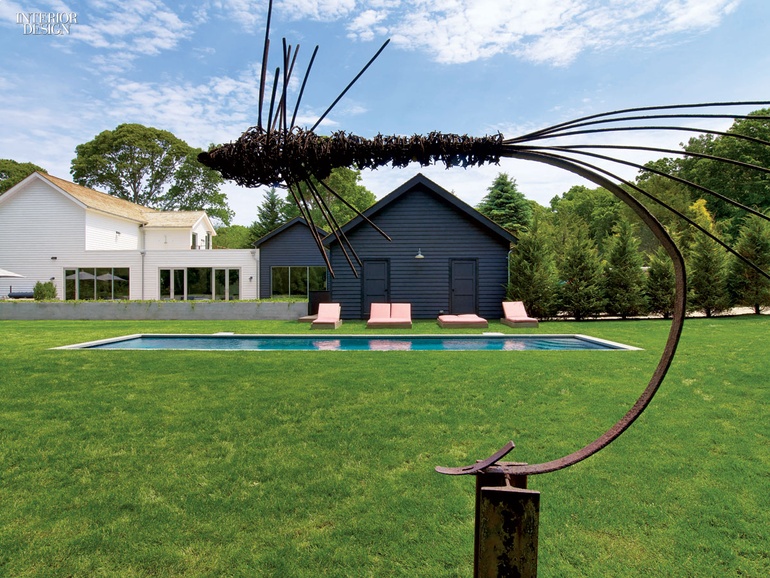 He’s done hotels, restaurants, and stores all over the world, not to mention a New York apartment for Hilary Swank. But getting a personal toehold in East Hampton? That initially proved a challenge for Mark Zeff and his wife, Kristen. First, the perfect waterside cottage slipped through their fingers. Then the couple found a place right on the sliver of bay beach where they were married, but there were complications in trying to close the deal. While the longed-for weekend house continued to elude them, furnishings for it languished in a warehouse. The solution turned out to be: Abandon the house search, buy a secluded plot of land a two-minute walk from the little beach, and build from scratch. “It was basically design a place around the things we had collected,” Zeff says.

He took inspiration from the area’s ever dwindling farm buildings, which he admires for their simple forms and straightforward construction. But the Black Barn, as he and his wife call it, is a decidedly polished take on the vernacular. A gravel driveway leads to a pair of single-story pitched-roof structures, the first a garage and the second what appears to be a small house. Both are painted black—not an altogether surprising choice for Zeff, who makes ample use of black and charcoal gray at his firm, Markzeff, but certainly unusual for an exterior in the Hamptons, where white and weathered cedar predominate.

The real surprise is the fact that the small black “house” is not quite so modest. It actually serves as the front of a much larger, white-painted farmhouse-style structure for an interior totaling 6,200 square feet. After you step through the sober recessed entry, a skylit gallery opens up dramatically before you—certainly no East Hampton farm building ever had a hallway 12 feet wide and 68 long. Sight lines extend past a flight of stairs, clear to the back of the house. “It’s a complete waste of space,” Zeff admits cheerfully. “But it’s also very much the center of the house—a break in the floor plan and a mental break as well.”

To the left of the hall are generous public spaces. In the living room, which occupies the barn-style front of the house, the cathedral ceiling’s white-painted joists are crisply graphic in contrast to a feature wall in pine planks rubbed with black paint for a softly textured effect. The opposite wall, more accurately a screen in ribbed glass, divides the living room from the eat-in kitchen. To the right of the hall are cosier, private spaces: the library stacked with National Geographics and bedrooms for guests and Zeff’s two school-age daughters. Stretching across the very back of the house, like a porch, are dining and sitting areas. Intimate spaces, he feels, are especially important with an overall open plan. “I made the mistake, in a previous house, of having everything in one space,” he says. “You need places for people to congregate—and to escape.”

Flooring on the ground level is poured concrete, cool underfoot. It’s sealed with polyurethane, for a soft sheen, and wonderfully mottled beneath. “The way they slushed the concrete in, that’s the way the stuff dried,” he says. The imperfect patches and seams add patina to new construction. As do furnishings that, as is typical for him, are literally all over the map. There are Tuareg rugs from Morocco, ebony chairs from Sri Lanka, and a farm table from his native South Africa. Light fix-tures look agricultural or industrial. Vintage sporting equipment—wooden oars and water skis, a burnt-orange surfboard—reinforce the connection to the water.

Injections of vivid color, notably burnt orange and hot pink, ramp up the energy level. Take the rug in the living room. “We were flipping through this stack of overdyed Indian rugs,” he recalls of a shopping expedition with his wife. “When we came across the pink one, I said, ‘That’s perfect!’ Kristen looked at me like I was crazy.” Then she got into the spirit. She was the one who suggested the pink-upholstered bench for the master bathroom. The bench now sits outside the enormous shower—glass-fronted and open-sided, almost as good as showering outdoors.

The palette is otherwise black-and-white in the master suite, a raftered getaway that fills the entire second story rising at the rear of the house. Black-rubbed pine walls, like the one in the living room, bookend the 1,400-square-foot space. The bed sits on silky black cowhides that have been tossed on the floor, where they resemble a giant puddle.

For all the indulgences, the house took just seven months to construct and, on a square-foot basis, cost less than half of what’s typical in these parts. The success has the Zeffs itching to get a new business under way. They’d call it Black Barn, and it would provide similar houses for others who hanker for something less showy than what’s often on offer.

In the meantime, the family enjoys the original Black Barn. The stereo plays David Bowie, Zeff’s musical hero, and soul artists from the 1970’s. His daughters cool off in the pool, watched over by a steel sculpture modeled on a fishing fly. Locally caught bass is barbecued on the grill in the courtyard, bordered by a bed of juniper bushes and a low concrete wall topped by ivy just beginning to spill over the sides. On Father’s Day, everyone strolled down to the little beach.