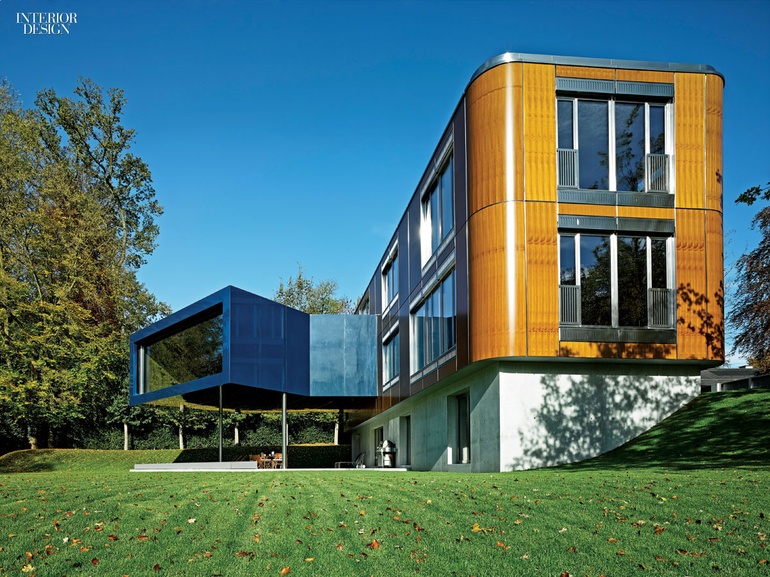 For naval-inspired architecture, landlocked Switzerland seems an unlikely location. On the outskirts of Bern, however, stands a house that not only resembles a mega-yacht but also draws directly on cutting-edge shipbuilding materials, fabrication techniques, and forms. Protruding from the back of the house, like a sharply angled ship’s bridge, is a wing constructed from modules manufactured in a boatyard on the Adriatic Sea. Their carbon-fiber skin was then painted a glossy deep blue normally used on boat hulls. “This is the first time, as far as I know, that advanced marine technology has been used extensively this way,” Ali Tayar says.

The house is the most recent of four projects that his firm, Parallel Design, has completed for the same family. In fact, it was while designing the interior of their carbon-fiber yacht that he first became intrigued with the material. “I got to see just how extraordinary it is, but most building proposals that I saw for it involved ‘blob’ architecture,” he says. Then, vacationing with the family on the Italian island of Sardinia, he encountered the carbon-fiber pleasure crafts produced by Wally Yachts. “I was taken with their angularity, and I began to think how I could use that in a residential context, just as early modernist architects lifted ideas from the great transatlantic passenger liners,” he continues. In Bern, those angular forms evolved into carbon-fiber enclosures for the wing, which contains the living room, as well as for the stairwell.

The main volume of the house boasts a more restrained aesthetic. A slender rectangle with radiused corners, these two levels are wrapped in prefabricated panels veneered in teak finished with a clear marine coating. They clip into stainless-steel mullions, creating a grid from which the irregular geometries of the carbon-fiber wing explodes. “The orthogonal facade and other systems elements hark back to ideas developed by Swiss architect Fritz Haller, who had a long relationship with this family,” Tayar continues. “In the 1960’s, he designed a modular house for them. Here, I took Haller’s principles of industrialized prefabrication and applied them to a highly customized, one-of-?a-kind project.” Bespoke details include stainless-steel window units with integrated slotted ventilation panels that can be programmed to operate remotely.

Because the house is moored to a hillside, a lower level in poured concrete is largely invisible from the street. At the back, an office and a guest suite with a kitchenette emerge to face a terrace sheltered by the protruding living room. A fully subterranean level, benefiting from skylights at the end of the terrace, contains a gym and a five-car garage with direct street access via elevator. All told, living space totals 4,800 square feet.

“Essentially, there are no separate rooms. The public floor is organized around the possibility of looking through the whole length of the house. Spaces flow into one another, a little like a New York loft,” Tayar notes, adding that another American resi-dential archetype, the ranch house, is evoked by the split levels. “You’re always going up or down a few steps, which define the spaces. The ones that are sunken, therefore having the highest ceilings, feel the most important.” On the main level, that means the entry, the living room straight ahead, and the dining room and the library, at either end. The top level’s master suite, similarly, is sunken, while the guest suite is not.

Such spatial demarcation is crucial, because the materials palette is quite limited. Walls and cabinetry were constructed with prefabricated teak panels, a direct reference to the facade. Flooring is generally terrazzo, heated and cooled with radiant coils embedded in the slabs below. The exception to this is the living room—its carbon-fiber structure precludes radiant flooring. Instead, the temperature is controlled by a system of radiant ceiling panels installed to mirror, exactly, the seams in the gray carpet. Furniture is equally minimal. An enormous two-sided sofa dominates the living room. In the dining room, Arne Jacobsen chairs flank a modular table by Tayar. And the storage modules that Haller designed for USM in 1963 appear nearly everywhere.

Some touches seem intended to emphasize that, although much of the house is based on Haller-esque prefabricated systems, it’s anything but a prototype. A case in point: The master bathroom’s soaking tub recalls a traditional Japanese cedar version but is made of limestone from a local quarry, established by the Romans. Substituting for night-lights in the master bedroom, glowing mother-of-pearl panels are set into the wall by the headboard—a touch that would look right at home on a luxury ocean liner.