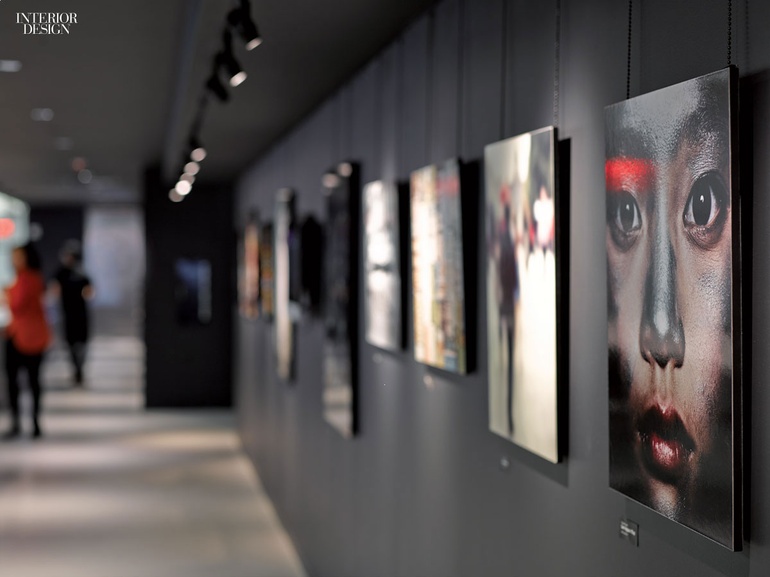 No two digital companies are alike in how they work, recruit, and market themselves. But that’s not the only challenge that Shutterstock, the online image-licensing behemoth, presented to Studios Architecture, hired to design a new headquarters. How do you create a space that reflects a data-base of every type of image imaginable? And how do you foster a dynamic office environment inside New York’s Empire State Building, a notoriously tricky landmark conceived for the working world of the 1930’s? The solution was to let the company and the building be themselves.

Studios had previously completed a stopgap renovation of the original Shutterstock office, where space had become tight for the 300-strong staff. “They called it a ‘squeeze play,’” principal Tom Krizmanic recalls. When the time came for a purpose-built space,Krizmanic was told that the goal was a 90,000-square-foot loft in a hip neighborhood with river views. After Hurricane Sandy, however, a location far from the water became especially attractive. Instead of being in a flood zone, he pointed out, wouldn’t it be better to move up to the 20th and 21st floors of the most ?photographed building in the world?

Nevertheless, working in an indisputably iconic skyscraper gave him pause. “The lobby is traditional. It feels like an office building,” he says. “That wasn’t ideal. But we knew we could still make the Shutterstock space look like a great downtown loft.” A few simple design tricks and a budget of $11 million accomplished precisely that. An open plan, while it might seem counter-intuitive for the 1931 Empire State Building, turned out to be the key to unlocking the two floor plates, the lower one 33,000 square feet and the upper one 27,000. “Shutterstock didn’t need a lot of private offices,” he notes.

Standing in the way of the openness, literally, was the massive core, housing an astounding 58 elevator shafts. After some coaxing—it took six weeks to plead the case—Shutterstock agreed to paint the outside of the core and the hallways through it a matte black. “It’s about making the presence of the core known, since it couldn’t be ignored anyway,” he says. The black walls also provide a perfect backdrop for the display of vibrant imagery not only from Shutterstock but also from its sister start-ups Bigstock, Offset, and Skillfeed. Elevator lobbies that Shutterstock didn’t need became a pair of narrow game rooms decorated by the in-house creative team. A mural based on the video game Super Mario Bros. wraps the game room with a Ping-Pong table. The other game room, a love letter to Alice’s Adventures in Wonderland, features throne chairs and chessboard carpet.

Also recreation-oriented is a suite of rooms in a corner on the lower level. Entered through a semi-hidden door, the suite contains a yoga studio, three massage rooms, and a library. The latter feels particularly like a residential loft, courtesy of the vintage-looking herringbone parquet and the wooden furniture.

Woodlike plastic-laminate on tabletops and touches of leather upholstery also soften the meeting rooms back in the work zone. Small meeting rooms predominate, as a powwow at Shutterstock tends to require no more than three people. And there are a lot of those rooms. Apportioning individual versus common space, Studios shifted the balance from the typical 80-20 to 50-50. Company-wide gatherings, meanwhile, take place in the café, with extra seating on a staircase that rises at one end. Installation, definitely not a simple design trick, required removing a full bay of slab, 20 feet square, and dealing with the limited lengths of steel that could be brought up in the aged freight elevator. Thanks to welding done on-site, the stair’s 10-foot width, the most generous in the entire building, belies the restrictions imposed.

At the top of the stair is reception. Its curved sofas were chosen for their similarity in shape to Shutterstock’s logo—derived, in turn, from the shape of a camera’s viewfinder—and the wool rug is the corporate red. While visitors wait, they can look at the photos, videos, and Web content running on walls of screens, their appearance meant to emulate Shutterstock’s Lightbox app for iPhones and Android tablets. The screen walls are mounted on a freestanding enclosure behind the sofas. Inside the enclosure, along with mechanicals, is a tiny space with a few stools and a table. Currently being used as a phone room, it will eventually be set up to function as, you guessed it, a photo booth.

Another upgrade is on its way, too. One of the tower’s setbacks occurs between Shutterstock’s two levels, creating 10,000 square feet of roof that’s soon to be converted into a terrace. It’s the first time in the building’s history that one of these spaces will be transformed for tenant access. Maybe they can snap a picture for us?