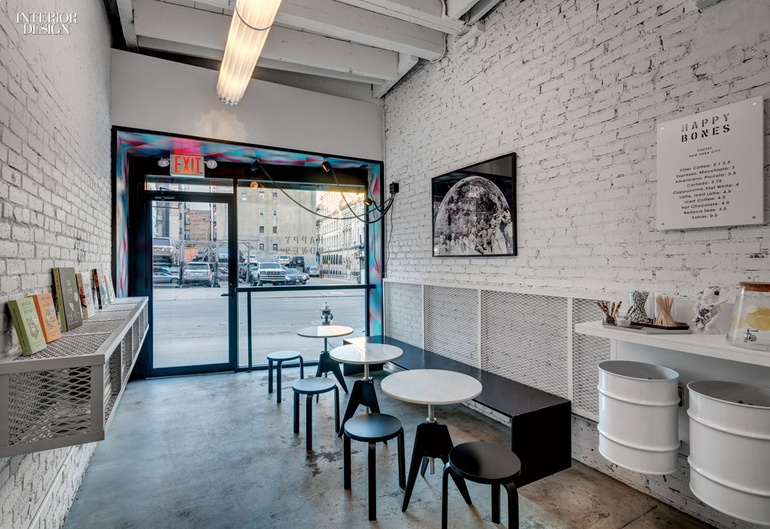 If coffee-bar decor has tended toward arts-and-crafts cliché, heavy on nostalgia and reclaimed wood, Happy Bones has hit the reset button. A pop-up, two years ago, introduced New Yorkers to “flat whites” and “long blacks” as expertly made as they are in New Zealand, where three of the four owners are from. (For the uninitiated, that’s an espresso shot topped by silky steamed milk and an Americano, re­­spec­tively.) The first permanent location, a storefront by Ghislaine Viñas Interior Design, is now gaining additional admirers for its fresh style.

Ghislaine Viñas had only 450 square feet of down-and-dirty concrete-floored space to work with. Previously, it was a meat locker for the butcher shop next door. But she managed to create three distinct zones.

To demarcate the entry, she made it a more intimate archway by dropping the ceiling from 12 feet to 9. Then she surfaced the ceiling and sidewalls in paper digitally printed with an abstract composition in blue, red, and white by one of the owners, an artist who was inspired by the “over-spray” left on the protective cardboard he uses when he’s painting.

The largest zone, the central area, offers café seating. Here, she eliminated color and “paid homage to the industrial rawness of the space,” she says.

A uniform white covers the brick walls and wooden ceiling, highlighting their roughness. Adding airiness is a skylight installed after a boarded-up original was discovered, thrillingly, during the renovation.

At the rear, a canopy appears to lower the ceiling again, a bookend effect. Here is the coffee bar proper, the nerve center of the operation. Conceived like a giant piece of furniture, it’s indeed a collaboration with a furniture designer, UM Project founder François Chambard.

The canopy, a series of sharply angled MDF compartments containing twinkling pendant fixtures, shares its vocabulary with the shelving that covers the back wall. Equally angular but constructed from powder-coated steel and waxed maple, the service counter supports all the coffee-making and customer-service functions. “A machine itself,” Chambard offers. Not to mention that the madly colliding diagonals are as energizing as a shot of caffeine.