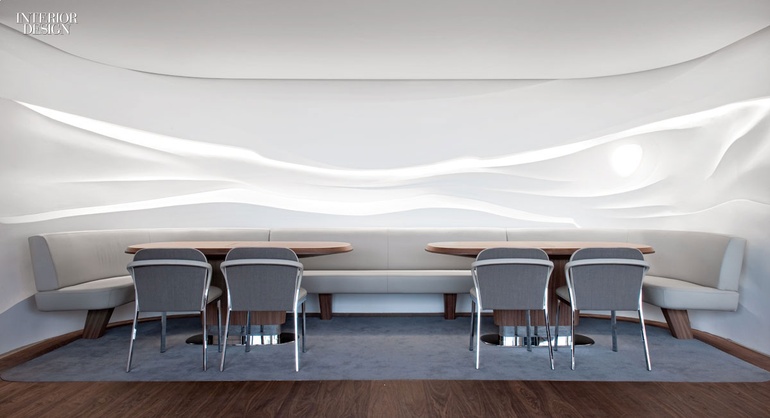 At the behest of Bavaria’s King Ludwig I, who needed suitably royal lodgings for his visitors in Munich, the Bayerischer Hof opened in 1841. Ludwig also patronized the hotel regularly himself, to bathe, since his own residence had no tub with running water. By 1897, however, Bavaria as a kingdom independent from the rest of Ger­­many was a thing of the past, and the great-grandfather of Innegrit Volkhardt acquired the property. Volkhardt, as the owner of what is now known formally as the Luxus Hotel Bayerischer Hof, has been following in a family tradition of renovation, rebuilding, expansion, and modernization, constants through good times and bad. And she is the one who put in a call to the firm of Jouin Manku.

“Are you sure you want us to come all the way from Paris to redo your breakfast room?” That was Interior Design Hall of Fame member Patrick Jouin and Sanjit Manku’s initial response to Volkhardt’s request. Her answer was a definitive yes. So they boarded a plane.

New to Munich, they found the Bayerischer Hof—with its 340 guest rooms and suites, five restaurants and seven bars, spa, and cinema—to be a maze of different styles and eras. “It has great character,” Manku says. The palatial hotel’s own “hall of mirrors,” the only original room to survive World War II bombing, is now a bar where the rococo molded-plaster walls and ceiling contrast with the blue neon-lit base of the freestanding bar proper. Trader Vic’s restaurant is a 1950’s Polynesian classic. “An absolutely perfect time warp,” Manku says. Jouin’s fellow Hall of Fame member Andrée Putman completed the Blue Spa and its café in 2005. The Garden and Atelier restaurants, 2009, and the Astor@Cinema Lounge, 2010, are the work of decorator and art dealer Axel Vervoordt. “We were totally charmed by Innegrit’s passion for the whole process,” Manku continues. “It was very personal, like someone’s own home. The kind of project we love.”

The sixth-story breakfast room that Jouin Manku would transform into the day-to-night Dachgarten, meaning roof garden, was overdue for an overhaul. Volkhardt sought total transformation of the 2,600 square feet, essentially a banal rectangle plus a dogleg, but with a bevy of constraints. The kitchen’s location could not change, and the buffet servery had to be nearby. Large areas needed to be able to split into several smaller ones, each with its own access, for different functions: corporate events, cocktail receptions, dinners. And the aesthetic had to assume multiple personalities. “Bright and crisp in the daytime, nice and moody at night,” Jouin says.

A counterbalance to all those challenges, the big plus was the roof terrace that runs the length of the space. Replacing the terrace-facing wall with glass opened up a spectacular view of Munich’s spires and domes, the surrounding forests, and the snow-capped peaks of the Bavarian Alps in the distance. City sights and mountain vistas then became the impetus for creating an interior landscape “speaking the same language,” Manku says. The local custom of protecting public fountains in the winter by boarding them up translated into an abundance of wood. Paneling and some of the ceiling are American walnut, while other parts of the ceiling are wrapped in snowy-white fabric. Flooring mixes walnut planks with earthy beige or gray carpet. Around the perimeter of the dining room, alcoves are backed by walls sculpted into abstract snowdrifts. “It’s a question of ornamentation, what its function is in 2014,” Jouin says of this striking  update of the 19th century’s plaster froufrou.

On the maximum-flexibility front, pocket doors can slide out to divide the long dining room in two, and sliding doors can partition off the servery. Above the latters’s two oval buffet islands hover similarly shaped hoods in polished copper. From inside them, copper-mesh sleeves pull down to transform the islands into nighttime display “lanterns” for sculpture or other art objects.

Evening is when the lounge—in the dogleg beyond the servery—truly comes into its own. Slender white porcelain tiles clad the front of the bar and encircle the bottom of the giant mushroom of a chimney for the double-sided fireplace. It’s ringed, in turn, by arcs of seating in caramel-colored leather. The mirrored tops of side tables rise and fall, thanks to pistons inside. Standing out from the overall palette of neutrals, a feature wall is the same pale green as the lichen growing on rocks in the Alps.