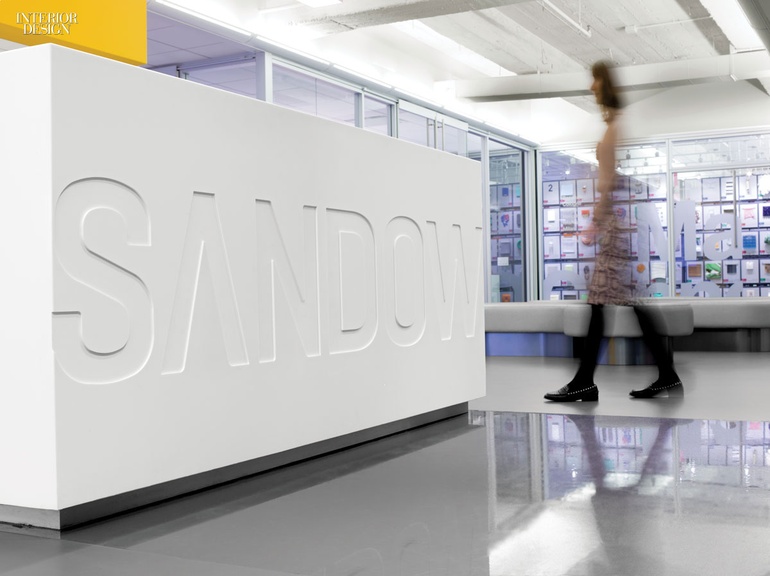 He said, “It’s important to me that the office reflects the kind of company Sandow is—innovative and obsessed with good design.” She said, “It’s great to collaborate with the best.” He is Adam I. Sandow, CEO of Interior Design’s parent company. She is Cindy Allen, our inimitable editor in chief, giving kudos to Gensler, perennially number one on the magazine’s annual list of the top 100 Giants firms.

Sandow, Allen, and Gensler senior associate and design director Jean Anderson collaborated on Sandow global headquarters in New York’s Time & Life Building. The entire 17th floor, it was to be a showplace not only for Interior Design but also for sister publications Luxe Interiors + Design, NewBeauty, and Worth, retail brand Fred Segal, design consultancy Culture + Commerce, and the Material ConneXion library. “The interesting thing was that this was not a typical office project for Gensler,” Anderson says, pointing out that the firm’s designs customarily anticipate client growth over a 10-year period. “Adam told us this space was to be temporary.” Four years was the number.

There wasn’t much heavy-duty  construction, consequently. However, there’s still plenty of punch. The team went all-out with color, edgy graphics, and furnishings both classic and cutting-edge. Together, these elements play against the iconic modernism of the Time & Life Building by Harrison, Abramowitz & Harris—most evident in the sliding doors of perimeter offices. The latter have views of a Midtown infinitely denser than it was during the era of Mad Men, set here.

Enclosed and open spaces share the floor plate. At either end of the central elevator lobby are public areas, one being reception. Its desk is a white monolith with the name Sandow carved into the front. Sure it’s branding. “But not in your face,” Anderson notes. Connecting directly to reception, for immediate access and high visibility, are Interior Design and Material ConneXion, which combined occupy about two thirds of the 32,000 square feet. “On any given day, we have visits from Material ConneXion members like Apple, Chanel, Google, and Steelcase, plus some of the world’s top architects and interior and industrial designers,” Sandow states.

For visitors and staffers alike, the big draw is the in-house Starbucks Coffee, complete with barista. That’s a carry-over perk from Sandow’s first headquarters, in Boca Raton, Florida. “More important,” Sandow continues, “it fosters conversation and idea-sharing among employees when they run into each other at the counter. I see it happen all the time.”

Connectivity and serendipity are leitmotivs. Groovy, curvy silver-upholstered ottomans in reception beg for a sit-down. Interior Design’s pair of break-out areas, making it easy for editorial, art, and marketing teams to meet in the middle, are demarcated by overhead mobiles made by rolling blowups of magazine covers and inserting them in clear tubes.

Midway through the renovation, yellow-and-gray became the corporate palette, and the team went to town. A yellow-painted  canopy extends from each end of the elevator lobby, emphasizing the point right away. Clearly visible in the glass-box conference rooms, yellow linear fixtures beckon. And that’s not nearly all. For every office and workstation, Allen, with laser-sharp focus, located guest chairs, task lamps, and even staplers in the same sunny shade. A more muted yellow carpet tile com-plements dove gray throughout.

Uniting so much of the design industry was a challenge. Luckily, no one could be more adept than Allen. “We’re showing off as many of our industry friends as possible. Of course, to fit them all in, we would need the whole building,” she says with a laugh. Anderson adds, “Working with Cindy was a standout experience. Seeing the editing process behind the scenes was fascinating.”

For Sandow himself, having a corner office in the Time & Life Building is coming full-circle. “Many years ago, in this very building, I had my initial meeting with the nation’s largest newsstand distribution company, owned by Time Inc.” It was that  meeting that helped him launch his first magazine, laying the groundwork for his eventual purchase of Interior Design.