It's Gonna Be Awesome: That's What They Say At Barbarian Group’s NYC HQ

May 30, 2014
By Joseph Giovannini
View Slideshow 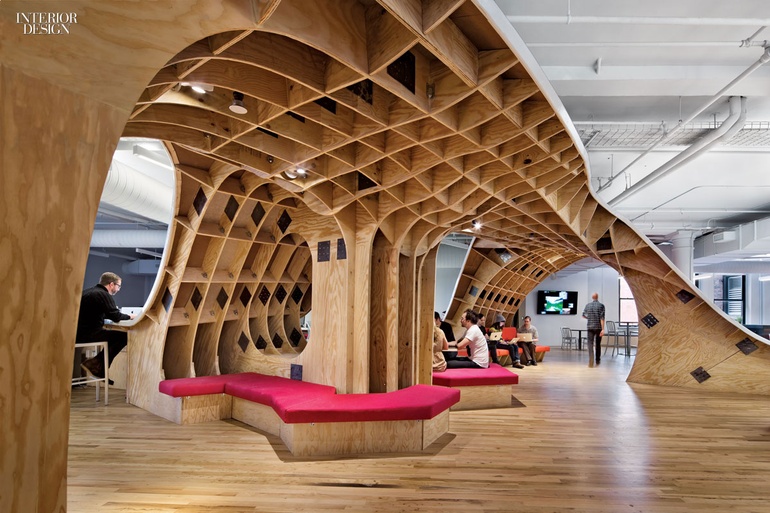 It takes one to know one, especially in the creativity business. The Barbarian Group’s CEO, Sophie Kelly, is arguing her own case when she says: “The world has to trust the creative process to get something interesting in the end. Hire great talent is the first lesson. Then let talent do its thing.”

Smart-ass Barbarian is the digital advertising and marketing agency that helped hatch Burger King’s Subservient Chicken, one of the most popular viral video series ever. As a lark, the agency also trademarked chairman Benjamin Palmer’s pet phrase, “It’s gonna be awesome.” Palmer is the one who, looking to lease a bigger New York office, set out to find Barbarian’s architectural match.

The agency was coming from an office with a layout that was, he says, “detrimental to the creative process.” Thinking outside the box would require working outside the cubicle. More specificially, he needed an environment in which serendipitous encounters could proliferate.

He had already seen images of the London ad agency Mother—where everyone sits in one big room, at a single 200-seat oval desk in cast concrete—when a friend introduced him to Mother’s architect, Clive Wilkinson. Though the Interior Design Hall of Fame member works occasionally in London, what he has truly specialized in is building out warehouse offices for California creative businesses. His signature is the big gesture and the strategic move rather than the fussy detail. Staircases zigzag; blocks of color make a major impact.

Barbarian’s floor-through is classic New York loft, with a high ceiling and two walls of windows. However, a warren of rooms cluttered the 23,000 square feet. Clive Wilkinson Architects started by subtracting, leaving only residual enclosures at the perimeter for meeting venues and support services. The bulk of the space was cleared out,  front to back and side to side, to make way for a super-desk that in this instance is not oval but serpentine. “No one faces a wall or is exiled in a corner Siberia where the desk dead-ends,” Wilkinson offers.

The complicated form, designed in Rhinoceros and Revit software, depends on an understructure built from CNC-milled pieces of plywood. Shipped flat to Barbarian, then fitted together, they create supporting arches that look like an egg crate or perhaps the ribbed fish-shape installation in “The Architecture of Frank Gehry,” a traveling exhibition in the 1980’s. The arches are high enough at strategic points for people to walk through—Wilkinson made sure that the desk’s swerving topography wouldn’t block lines of desire between the reception area, kitchen, conference rooms, production studio, and restrooms, all at the perimeter. He also outfitted the spaces sheltered by the arches with seating and tables inviting people to gather informally or just chill by themselves.

The desk flows, rising and falling, for 1,100 linear feet—a Möbius strip without the twist. Space between the desk and the building perimeter becomes an avenue that, supplementing the pass-throughs, loops around the whole floor. Along the way, some of the curves create eddies that pool people, additional micro-environments. The desk propels individuals into a mode of encounter. Someone on the way to lunch chances across someone on the way to make a phone call.

Each person has an assigned seat at the white work surface, its seamless resin blitz-poured in a continuous  session lasting nearly two days. Everyone is also supplied with a desktop computer and a rolling cabinet for their personal effects. There is no corner office, no privileged control spot. The chairman and the CEO sit in zones that arebarely distinguishable from others. “I always used to be in private meetings, but now I know everyone in the office, because I see them all the time. Nobody eats alone at his desk anymore,” Palmer says.

Since the advent of the paperless office and the new democracy of ideas, architects have tried to adapt modernism’s open plan, with its rows of desks or cubicles that could leave employees “cubed” and isolated. One experimental response suggested that we just forget about the office and work at home, but colleagues can never spontaneously bounce ideas off one another that way. In a different scenario, Wi-Fi allows everyone to sit anywhere. But employees need a place where they can be found, not to mention a place for family pictures. Furthermore, parking a foosball table or a basketball net in common spaces can amount to just token informality. Nice try, but some people don’t really want to play.

Wilkinson’s super-desk, completed for $300,000, represents an original response to the new office paradigm. “We prioritized face-to-face encounters,” he says. “We’re tribal.” Collaborators no longer have to book hour-long slots in conference rooms, with all the lost time that formal meetings entail. Palmer adds, “The table looks exciting, but it’s also extremely functional. It creates friction—in the good sense.” The environment is systematic yet individualizing and, above all, spirited and inspiring. It proves Winston Churchill’s dictum that after we shape our buildings, they shape us.