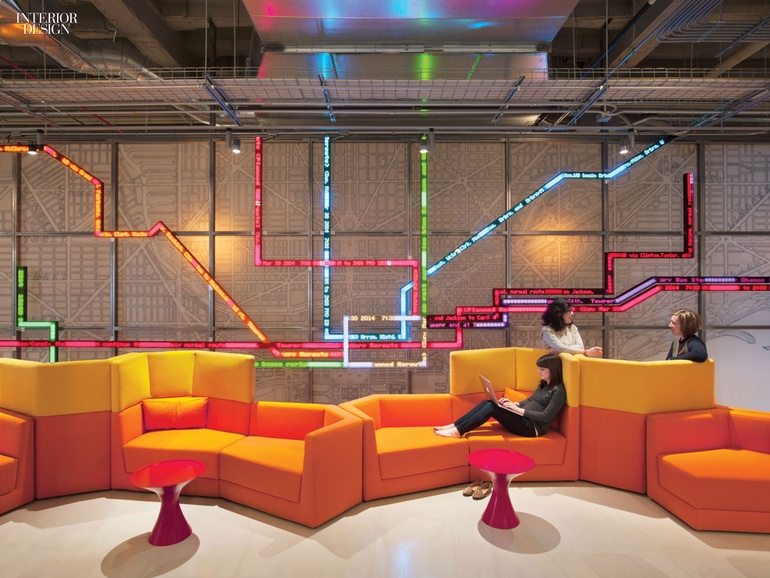 In the debate about open offices, much has been said. They foster collaboration and innovation. Or they rob employees of concentration and privacy. Gensler design principal Carlos Martinez has heard it all. So when he received instructions to deliver an open office for the Chicago headquarters of Motorola Mobility, that he did. Throughout its chunk of the Merchandise Mart—the 1930 showroom building huge enough to boast its own zip code—the requisite rows of workstations stretch virtually unimpeded, and the Mart’s deep floor plates and high ceilings only increase the impact. Creative or disruptive? Energetic or stressful? Doesn’t matter. Because this open office is made to be hacked.

Before we get to that, however, some background. When open offices were becoming a tech-industry standard, Martinez took note, even organizing a Gensler team to embark on a study. Then, in 2010, he was tapped to build the Mart’s much-anticipated coworking incubator, intended to give direction to Chicago’s rudderless tech scene. He turned to his research. “The main thing we had discovered was that the office is more than a physical environment. It’s a place in the mind,” he explains. In the best tech environments, he found, a nearly palpable excitement manifests itself. “We were hit with it every time we walked in the door, and we asked ourselves, ‘Why is this happening? What are the physical elements supporting it?’” His research showed that the open plan, despite criticisms, does support dynamism and flow.

Martinez’s task for Motorola Mobility, the telecommunications equipment company’s former cell phone division, first purchased by Google and subsequently sold to the Chinese PC manufacturer Lenovo, was to facilitate a move from suburban Libertyville to the Mart, 605,000 square-feet on three full levels and a partial one. On all of them, acres of workstations surround labs for R&D as well as a smattering of social areas including the obligatory game room. Yet the interior needed something beyond those technology trappings, and the answer was not more dividers, more storage, more efficiency. “We are not driven by those things,” he says. On one research trip to a company in San Francisco, he found a staffer sitting alone on top of storage lockers, with a laptop—a “hacked” workplace of sorts. This encounter led him to realize what motivates people: bucking architectural constraints to make one’s surroundings one’s own. “Space should not be overly precious. Space is to be lived in,” he says.

For Motorola’s office to succeed, generating maximum energy among the 2,400 employees, the design would have to be an anti-design, encouraging modifications by individuals. He jump-started the hacking by installing electrical outlets and data ports in the floor to allow workstations to be rolled practically anywhere. Because that might look sloppy with a regular lighting grid, he installed linear fixtures on the diagonal. Shortly after move-in, admittedly, the workstations remained in formal configurations. But what about in six months, five years, 10?

Meanwhile, intentionally mismatched seating begs to be discovered by a sitter with a similar personality and brought to another location—perhaps the multipurpose area enclosed by lumber latticework and anchored by bleachers. Walls in wood, brick, corrugated metal, or felt, all materials reminiscent of Chicago’s industrial roots, differentiate divisions throughout. Retro signage harks back to the era when Motorola manufactured car radios.

The game room is less of a techies-love-pinball cliché and more of a hybrid that can expand by combining with adjoining spaces. Roll up the garage door that serves as one of the sidewalls, and there’s a pantry, one of 10 on themes ranging from Lakefront Lifestyle to Zen Garden. Roll up the garage door on the opposite side, and there’s the IT service desk. The playfulness continues in the seven R&D labs, most of them wrapped by windows for viewing from outside. In one lab, robots drop cell phones, pick them up, and drop them again in a hypnotic wear-and-tear simulation. Nearby, an engineer looks out, over the rows of workstations, to the open sky. . .and grins.

“One thing we have learned from researching and building open plans is that we can’t say, ‘That’s wrong, and this is right. We live in a world where there are multiple solutions,’” Martinez says. “Find the one that’s right for you.” Or let employees figure out the one that works for them.