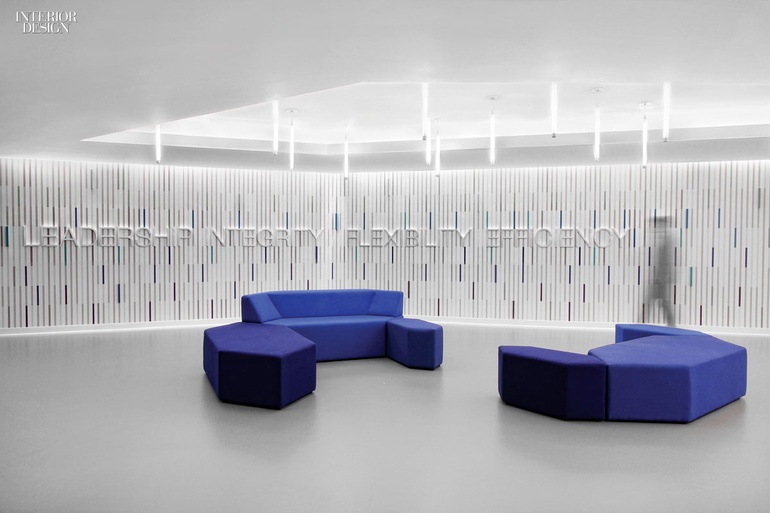 Wellness is both a business goal and an employee mantra for Bayer HealthCare, maker of the eponymous aspirin as well as Aleve and One-a-Day vitamins. Which is partly why the company moved to a shiny new office in Whippany, New Jersey. The other reason was to consolidate business units located throughout New Jersey and New York.

Gensler’s interior seems to whisk you away from the bland strip malls and choked highways of a suburban landscape dotted with pharmaceutical giants. Instead, the Bayer building feels more like an upscale urban enclave or an international airport concourse. An atrium painted titanium white welcomes everyone—all 2,300 of them. A staircase clad in white porcelain tile zigzags up five stories from here, while a sculpture based on the DNA double helix hangs overhead. At ground level, trails of gray rubber flooring lead to break-out areas paneled in rift-cut oak. In view just beyond are crisp rows of workstations.

The 690,000-square-foot layout works to spur activity, with inviting stairs among the incentives to spend less time seated. Access to natural light also boosts energy in keeping with Bayer’s “LIFE values.” That’s an acronym standing for Leadership, Integrity, Flexibility, Efficiency, words that appear prominently at the entry to the 550-seat cafeteria.

For many employees, this is the first time in an open-plan office, replete  with sound-masking, fluorescent ambient light, and motorized window shades. “Life-science companies need collaborative environments to speed innovation,” principal Brenda Nyce-Taylor says. Design director Janine Intonato adds, “The visibility and openness encourage everybody to get up, move around, and make things happen.”

And they’re definitely happening. Executives from Bayer headquarters in Germany have already lined up to host conferences and meetings in Whippany.