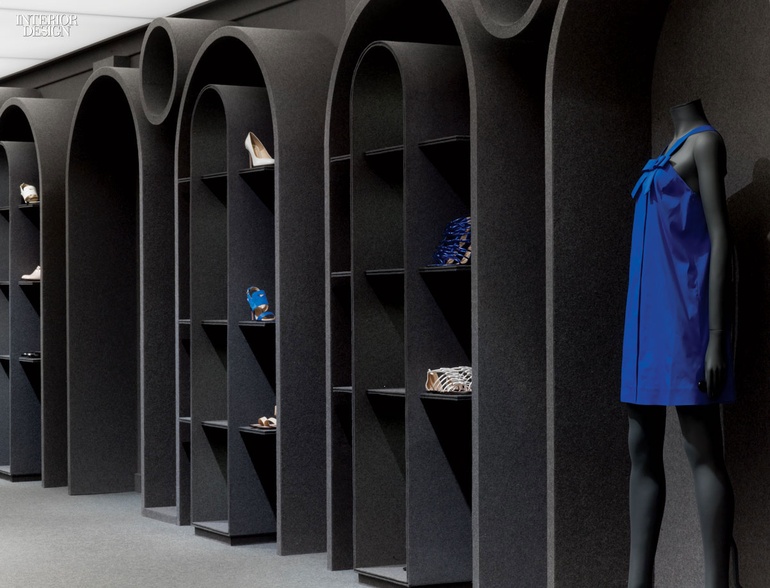 A radical, experimental, and witty outlook has always characterized the career of Viktor Horsting and Rolf Snoeren. For one of their Viktor & Rolf runway shows, everything was black. . .including, quite controversially, the models’ faces. And a former Milan boutique gave the illusion that it had been turned completely upside down, with herringbone parquet on the ceiling and archways upended to form curved seats. So, to brainstorm for the celebrated women’s and men’s label’s first Paris boutique, the pair invited Architecture & Associés principals Pierre Beucler and Jean-Christophe Poggioli to head-quarters in Amsterdam.

For Paris, the brief was perhaps even more unnerving than for topsy-turvy Milan. “We’d like a store that’s invisible,” Horsting said. Beucler and Poggioli’s response was to come up with a concept they christened “ghost architecture.” They took neoclassical elements such as arches and oculi and stripped them of all embellishment, reducing them to their most essential forms. “The term ‘ghost’ is about absence,” Poggioli explains. He and Beucler also proposed cladding the interior in just one material, gray felt—a suggestion that immediately met with great enthusiasm. “There’s something surreal about executing architecture in a fabric,” Snoeren notes. The fashion duo embraced the notion that the thickness of the felt would visually soften the perception of architectural forms, while the use of a single color, including the matching carpet, would place a greater focus on the merchandise. Felt’s ability to muffle sound would create greater intimacy, too. Finally, felt appealed to Beucler and Poggioli for its implied reference to the art world, most notably the installations of Joseph Beuys.

The flagship’s location, opposite the ultrahip Hôtel Costes on a prime shopping street, was stellar, but the 4,700-square-foot space itself was less so: split into a boutique at street level and a spa in the basement. “It was difficult to get an idea of the volumes, particularly in the spa, which was chopped up into lots of treatment rooms,” Beucler declares. There was also a succession of sunken whirlpool baths that resembled “mini swimming pools,” he adds. After demolition, about the only thing that remained was the central staircase—obtaining planning permission to replace the stair would have taken too long.

Stylistically, it was more or less a given that the vocabulary of the interior would derive from neoclassicicism. “There’s always a link to the past in Viktor & Rolf’s work—but each time with a twist,” Beucler notes. Horsting offers, “We do seem to gravitate toward a neoclassical aesthetic, perhaps since it’s slightly reminiscent of a couture salon, which for us is a long-standing dream.”

As points of reference, Beucler and Poggioli examined a book on Parisian mansions as well as various 18th-century architectural studies. Tricks of perspective derive both from Italian Renaissance drawings and from the German expressionist movie set of Nosferatu. Although the ground level of the flagship may at first appear perfectly rectilinear, it’s not. The back is 7 1/2 feet narrower than the front, and the ceiling slopes down 16 inches. If shoppers don’t notice, that might be partly because their eye is deceived by the converging grid behind the glowing stretched ceiling and partly because they’re focusing on the imposing series of arches over the stairwell.

Downstairs, focal points include the central rotunda, with its oversize bouquet of felt flowers standing on a pedestal, and the sofas, conceived as updates of a chesterfield. Along the perimeter is an almost hypnotically repetitive succession of arches, most of them containing a mannequin or shelving. None of the arches are fixed in place, however, so they can also be used as freestanding displays—Beucler and Poggioli preferred to maximize flexibility to better accommodate the merchandise as it evolves from season to season.

Many of the most gratifying details are also the subtlest. As you progress away from the front of the ground level, architectural elements become increasingly minimalist to the point that they almost disappear. You have to look quite hard, at the rear of the basement, to see the “paneling” created not in the traditional way, with wood or plaster, but by layering strips of felt. That’s the closest Beucler and Poggioli come to “invisible.”