At the Century Mark: Guerlain Gets an Update by Peter Marino 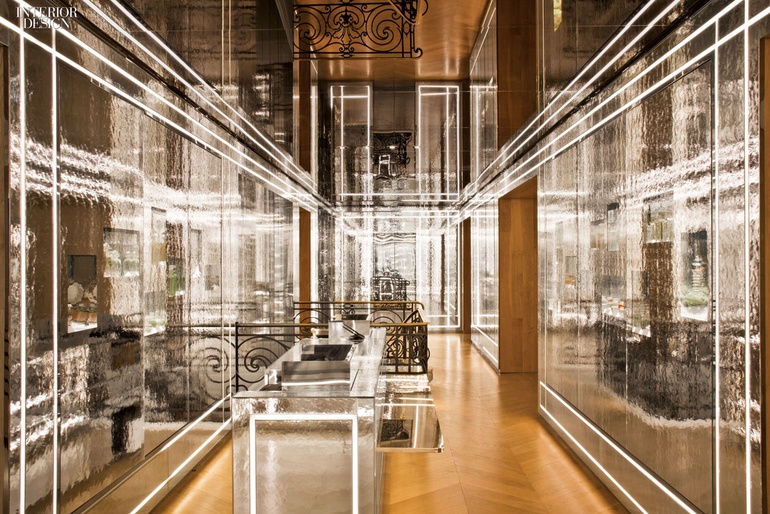 On the Champs-Elysées in 1914, when the Guerlain boutique opened, it instantly became the most elegant perfumery in Paris. The architect of the Ritz hotels nearby and in London and Madrid had designed the splendid building entirely for the family-owned fragrance company—a suite of offices and the family’s apartments were on the upper stories. Then, in 1939, part of those family quarters was converted into one of the world’s first spas, a separate beauty institute with interiors and furnishings by Jean-Michel Frank and Adolphe Chanaux, featuring sconces by Diego Giacometti and a tapestry by Christian Bérard. Maxime d’Angeac and Andrée Putman were the next team of talents to make their mark, giving the original boutique and the spa a makeover in addition to connecting them internally. So a renovation of the landmark, in honor of its 100th anniversary, was no small affair for Guerlain, now a subsidiary of LVMH Moët Hennessy Louis Vuitton.

Interior Design Hall of Fame member Peter Marino not only reinvented existing spaces but also expanded. At 12,500 square feet, the project included an extension of the sales floor into an adjacent former restaurant and the creation of a café, a pâtisserie, and a souvenir shop in the basement, reached via a monumental marble staircase. Everywhere, Peter Marino Architect integrated signature motifs in ways sometimes splashy and sometimes subtle, almost subliminal: gilded Napoleonic bees and decorative swags from the flacon made for Empress Eugénie in 1853; the sunburst emblem of Louis XIV, first used by Guerlain on a 1920’s compact for face powder; the more recent orchid from the Orchidée Impériale skin-care line. Key elements from the 1939 decorative scheme have also reappeared, transformed.

Much of the 1914 perfumery is landmarked, an octagonal composition in 12 varieties of marble. “I played with variants on the theme of marble set into marble,” Marino says. He also suspended a Philippe Starck crystal chandelier over each of the four marble  sales counters in the corners and, between two of the counters, hung a huge sunburst relief in pale plaster. Everything is now reflected in the rippled mirror on the ceiling.

A new archway in a sidewall connects to the extension, a long, narrow space that also has a direct entrance from the street. Walls, floor, and ceiling here are a mix of pure white and black-veined white marble, but certain sections are more colorful. Lipstick-red swirls embellish the mirrored walls of the cosmetics consultation room. Right outside, a mosaic mural’s giant pair of eyes seem to follow shoppers as they pass. Beneath the eyes runs a translated Marcel Proust quote spelled out in crystal beads: “The real voyage of discovery consists not of seeking new landscapes but in having new eyes.” At the very back, orchids depicted in crystal occupy niches beneath a ceiling-mounted cluster of 1,300 crystal spheres that, seen from certain angles, also form an orchid.

If, instead of walking through the archway from the 1914 perfumery to the extension, you climb the original staircase, with its wrought-iron balustrades, you’ll find yourself in a long gallery lined in rippling mirror detailed with gilded brass strips. Flooring on this level is Frank-inspired parquet, while walls in the salon where perfumed gloves, scarves, and fans are sold and skin-care consultations take place are plaster imitations of Frank’s parchment. Reserved for VIP customers’ consultations on custom fragrances—when classic Shalimar or Mitsouko simply won’t do—a corner salon features sunbursts in straw marquetry, a 17th-century technique later favored by Frank.

Bérard makes an encore, too. His tapestry in the spa has morphed into the pâtisserie’s wall covering appliquéd with the same architectural motifs, this time in the Guerlain colors of peony and amethyst. The basement’s other major attraction is the café, supervised by the chef of the Michelin two-star Grand Véfour. To combat claustrophobia underground, Marino installed trompe l’oeil “windows,” fabric printed with Parisian landscapes and stretched over backlit glass. The lighting changes gradually, with the hour of the day outside on the Champs-Elysées.