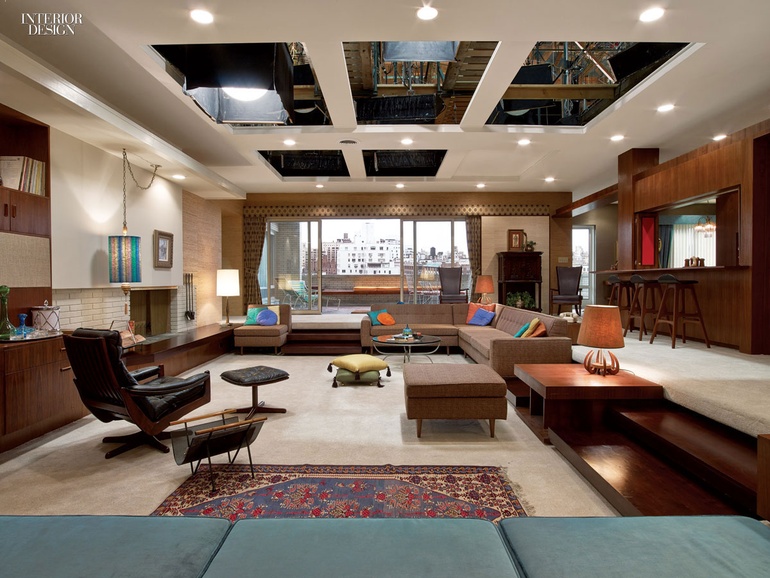 It’s the era of the three-martini lunch, nonstop cigarette smoking, the rise of TV commercials, and the growth of a political-cultural awareness encompassing the John F. Kennedy assassination and civil rights. Mad Men, which just began its seventh and final season, is a time capsule from the world of 1960’s advertising in New York. Matthew Weiner’s dense story line is propelled through protagonist Don Draper, the former creative director at Sterling Cooper & Partners. Handsome, debonair, and talented, Draper is also a louche and a tortured soul. His life interweaves with rich subplots provided by his ad agency team, his wives and children, his affairs, and his drinking.

The plot has top-tier silent characters, too. Fashion-wise, women’s prim shifts evolve into the kind of mod looks popularized by Courrèges. Furniture-wise, the ’60’s were of course mid-century heaven, as evidenced by sets that Weiner, production designer Dan Bishop, and set decorator Claudette Didul conceived down to the most intricate detail. Who knew there was a distinction between East and West Coast mid-century? Weiner did. And he invited Interior Design’s Cindy Allen, the only magazine editor ever granted full access, to tour Draper’s Park Avenue apartment, the agency’s Time & Life Building office, and more on four sound stages in Los Angeles.

Matthew Weiner: When I finished the script in 1999, there was still this feeling that mid-century was bad. Of course, it’s cyclical. Things go in and out. I know the magazine because my wife is an architect. It’s a cut above everything else.

ID: Why, thank you. Did you grow up in a mid-century environment?

MW: I was born in 1965 and lived in Baltimore until I was 11. Then we moved to L.A., where there was a big ’50’s revival going on. And I love the fact that my parents were bourgeois. My father was the first person in his family to go to college. Same with my mom. They filled our house with Milton Glaser posters from MoMA, made sure I heard great music and saw movies like The Maltese Falcon. The first season of Mad Men takes place in 1960, when it was part of American culture to be educated, to be cultured, to be intellectual, to have taste.

ID: You mentioned learning there was a distinction between modernism on the East Coast versus West.

MW: Yes, our set for Don and Betty Draper’s Westchester house is pretty much like houses in Baltimore. I thought it would be possible for the Drapers to have a Heywood-Wakefield dining set, but my team said, “No, no, no!” Even the color palette—I was thinking more sand and aqua, but it wasn’t. The sets needed to be not just Danish mid-century but East Coast Danish mid-century. It’s exciting to be that specific. I looked at documentaries and ads from the time period. It became this huge education.

ID: Can we talk about your team?

MW: Everyone is not just fetishistic about detail but also always concerned with storytelling. Everything is story. All the clutter you see reflects the characters. What’s revolutionary is that all the sets connect. For example, the Sterling Cooper office is some version of the Drapers’ apartment, which is quintessentially mid-century Knoll, Herman Miller, Steelcase.

ID: I am forever asking photographers to shoot as if they were telling a story. How do you breathe life into a creation of your own imagination?

MW: I’m working in a completely fake environment where we control everything. How do we make this feel like it’s real? In every picture of an office from 1930 on, the wires are cut off every lamp, because they look terrible. I tell the set-design team, “Put the wires on!” Right away, something happens. Why is there all that ugly stuff hanging off the desks? Because that’s how it would really be. It’s just as important for me to show a character’s open desk drawer with a half roll of Life Savers, with the paper rolled back, as it is to find the perfect dining table.

ID: Would your “production designer” and “set decorator” be our “architect” and “interior designer”?

MW: Yes, the production designer, Dan Bishop, is responsible for everything visual other than cinema-tography. Dan has two incredible skills. He can build ground-up spaces as well as turning existing spaces into incredible period pieces. Claudette Didul, our set decorator, handles all the details, and I do think the audience appreciates them. She’s really into personalities, by the way.

MW: When Claudette and I were discussing the character Pete Campbell, it came up how I once saw a ceramic dog in an executive’s office. I don’t know if that’s waspy or what, but I just thought it was the weirdest thing. So now Pete’s office has a ceramic dog.

ID: Our magazine just moved to the Time & Life Building, so we think of you! Do your set designers show you plans in progress?

MW: They do. Dan’s always designing dramatic spaces, like the office staircase, which is actually two sets, one for up and one for down. And it was Dan who thought of putting the character Joan Harris’s office in the center, with doors on both sides. I said, “People are going to be cutting through all the time.” So we made that a part of the story. The doors are also glass, so she has no privacy at all. The story becomes a physical space.

ID: Today’s office design is all about collaborative spaces. Isn’t it funny how the Sterling Cooper office has somewhat foreshadowed that?

MW: The biggest decision we made was not to do cubicles at Sterling Cooper. It’s the ’60’s, and there were many offices with cubicles. But when Dan was designing, I thought, If we’re going to a new office, we’re going to do a new storytelling thing. So Dan came up with the account-executive lounge, where we can accumulate characters in a public space. They can pass through it, which is important. We don’t have to start every scene with someone knocking on a door. We don’t get trapped in an office. Although, if we do, there are windows with these incredible backdrops.

ID: They’re made possible by advances in technology?

MW: We switched to digital photography, which helps us create backdrops that are more believable, especially if you put the sets on platforms to shoot. Don and Megan Draper’s entire apartment got raised 3 feet off the ground, which makes the background look like the real thing.

ID: I still can’t believe I’m on the lot, seeing the sets up close and personal. The apartment could have been done by a decorator. Was that intentional?

MW: Certainly, the Drapers got a decorator. It’s right out of the pages of a magazine! The white carpeting Megan wanted is not something you can really live with, which again tells a story about her character.

ID: If you had to pick a favorite set?

MW: I think that apartment. For me, personally, it satisfies a lot of my fantasies. It’s very sexy. There’s texture, wood. It’s open, but you feel protected. It’s very cosmo-politan. You feel smart there. You feel handsome.

MW: I get to have this experience where something that I saw in my imagination I now see in three-dimensional space.

ID: Could you describe that feeling?