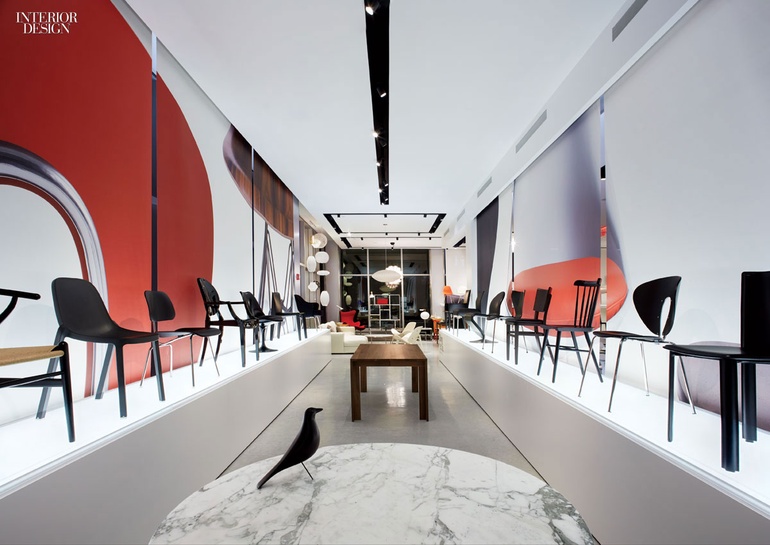 There once was a furnishings chain that rocked and revolutionized retail. In 1953, Harvard University architecture chair Benjamin Thompson founded the groundbreaking Design Research to humanize modern houses. Whether he was selling his own goose-down sofas or Scandinavian silverware, customers went wild. Jacqueline Kennedy bought her Marimekkos at the summertime boutique in Hyannis Port, Massachusetts. And a regular at the New York outpost was Edelman Leather’s Teddy Edelman. She and her husband, Arthur, had furnished the family home with D/R by the time it went bust in 1978.

Today, their grown son John Edelman is president and CEO of the powerhouse modern and contemporary fur­niture retailer and manufacturer Design Within Reach. So perhaps it’s no coincidence that the New York flagship of DWR is just down the street from the former site of D/R. He also notes the flagship’s proximity to the many design showrooms in the neighborhood. “I think it remains the most important couple-block radius for interiors in the whole world,” he says.

DWR was founded in 1999 and went on to open a string of stores before hitting some recession-related bumps in the road. Edelman, who came to the rescue in 2009, has since launched a half dozen second-generation retail hubs, all by Sayigh + Duman. The flagship—in a new building by TPG Architecture, on a highly visible corner—is 20,000 square feet, more than generous enough to put the company’s wide-ranging pieces into thoughtful domestic combinations. Edeleman calls the experience “total one-stop shopping for authentic modern.”

Sayigh + Duman built out the flagship according to a DWR portfolio of display concepts that readily morph when they move from one geographical location to another. (Next up are Houston, Chicago, and Seattle.) “I’ve realized that retail is a great place to hone ideas,” Laith Sayigh says. He’s responsible for the swatch wall, a pixelated installation of upholstery samples. He also contributed the lighting display concept that has become a DWR signature: disparate pendant fixtures clustered together.

Architectural lighting is primarily LED. To set the basement’s stretched ceiling system aglow, Koray Duman splurged on LED arrays, because clearance was insufficient to avoid the bright striping that would have occurred with less-expensive fluorescent tubes. Ceilings on the main levels, meanwhile, are surprisingly high considering that the developer, Marx Realty & Improvement Co., intended the space for office tenants. Here, track lighting is housed in black-painted recesses that outline rectangular areas of ceiling, visually defining distinct furniture groups directly below. One ensemble’s pieces are described, by wall text in vinyl lettering, as “finely tailored with a biomorphic twist.” And they are.

In a narrow gallery, customers are encouraged to test-drive dining room furniture. “It’s kind of a playground for chairs,” Duman says. They line up on long platforms, ready to be grabbed for placement at one of the tables in the center. The gallery is sandwiched by the windows and a row of structural columns, and scrims on both sides are emblazoned  with images of modern classics. The scrims lining the windows, softening the sun’s glare, are of course visible from the street below, offering supersize Jesús Gasca chairs and Bernard-Albin Gras sconces to potential shoppers.

Most of what they can see behind the scrims or the bare glass is neutral, and that continues throughout. In deference to the furnishings, virtually all walls are painted milk white or medium gray. Flooring is about half engineered planks of smoked Russian oak, half polished concrete. A striking exception to the quiet tones is the red powder-coated aluminum cladding the elevator core and part of the ceiling in the entry. “That’s the color of Design Within Reach,” Duman explains. As DWR has just 800 square feet at street level, the red entices shoppers to the sales floors above. “People entering need to be really excited to take the stairs or the elevator,” he adds.

The red ceiling in the entry is also the bottom of a rectangular double-height volume, framed in red and seemingly afloat along one side of the two upper levels. To create a floating effect, Duman removed remarkably small portions of the adjacent slabs. Shoppers enter the “duplex” via a bridge crossing the void—or just look through the glass front. He invites comparison between that view and the Alfred Hitchcock classic Rear Window.

The living room and bedroom inside only enhance the effect. “Everyone says they want to move into the apartment,” Edelman jokes. A model life, lived on display, looks tempting indeed. Just add some Almoco flatware, a Portuguese-made gold-plated DWR exclusive.