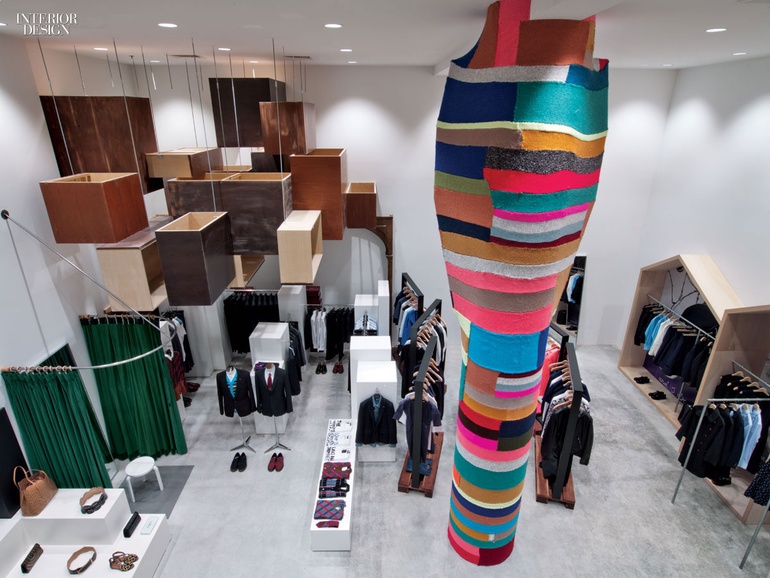 “We’re shopkeepers first and foremost,” Adrian Joffe says. “This isn’t art for art’s sake, even if some people treat it like a museum.” The CEO of Comme des Garçons is walking through Dover Street Market New York, the emporium he and his wife, fashion designer Rei Kawakubo, have created in a beaux arts building. Dover Street Market is a showplace not just for Comme des Garçons, Kawakubo’s best-known clothing line, but also for several lesser-known Kawakubo brands as well as the likes of Prada, Jil Sander, Louis Vuitton, and the skateboard-culture outfitter Supreme. Each occupies its own space in the seven-story, 22,000-square-foot building.

Joffe is right about the museum feeling. Many visitors seem more interested in snapping a picture than in shopping. What pulls them in are the dozens of different environments, unified by several features to turn the store into a kind of museum of applied arts—which is fitting, since the building opened in 1908 as the New York School of Applied Design for Women. Among the unifying elements are a six-story column covered entirely in wool, the work of the street-knitting pioneer Magda Sayeg and her team of Texas needleworkers. Another column is appliquéd with tiny houses. There are pieces by a self-described “junk sculptor” and murals commissioned from graffiti artists. In part because the building is leased, not owned, and in part to capture the energy of a street fair, there’s an edginess that sets Dover Street Market apart from typical high-end boutiques, with their predictably lush interiors. “People wonder who it’s for,” Joffe says. “It’s for anybody with an independent spirit.”

Perhaps the most striking installation is a stairway linking two of the upper levels—the final work by the late Madeline Arakawa Gins. For 50 years, she and her husband, collaborating as Arakawa + Gins, had pursued a theory they called reversible destiny: the idea that aging could be eliminated by archi-tecture that kept users a little off-balance. Kawa-kubo was fascinated by the couple’s out-of-the-box thinking. The stairway, which Gins called Biotopological Scale-Juggling Escalator, is a kind of psychedelic chute with an interior surface as bumpy as a chocolate-chip cookie, punctuated by several small sculptural installations. (However, the steps themselves are conventional, in keeping with the city building code.)

This Dover Street Market is the third in a series, following the London store, which opened in 2004 on Mayfair’s Dover Street, and the 2012 opening in Tokyo, where Kawakubo is based. Plans for New York were on the back burner until friends told Joffe about a templelike building that was sitting vacant. Comme des Garçons quickly signed a lease and brought in the architecture firm Ishimaru Co. to execute Kawakubo’s vision. After stripping the interior down to bare concrete and brick, leaving a kind of blank canvas, she had a glass elevator installed to offer glimpses of the seven levels as it goes by. By the time the elevator was in place, less than three months remained to get ready for the Christmas opening, which is why many of the backdrops are essentially stage sets, ingenious but temporary. One clothier, J.W. Anderson, distinguished its space by building a backdrop with bright blue foam components from the Imagination Playground, a kit by Interior Design Hall of Fame member David Rockwell.

With some frocks priced at $10,000 or more, is the look a little raw for the well-heeled customers the store depends on? That doesn’t concern Kawakubo, who designs only for herself—and lets customers catch up if necessary. When London’s Dover Street Market opened, store managers would ask, “Can’t we have a little carpet in the changing rooms for our rich clients?” But that wasn’t going to happen. According to Joffe, “Rei does what she does, and then it’s about education.” Besides, she’s an equal-opportunity provocateur. For every Prada buyer who might be wondering why the space is so unfinished, there may be a Supreme customer who’s thinking, What’s Louis Vuitton doing here?

The high-low formula seems to be working, but that doesn’t mean Dover Street Market won’t evolve. Joffe plans to close it twice a year for a few days of sprucing up and reinstalling. Indeed, several of the small displays shown here may be replaced. And don’t expect them to return at a later date. “We never do the same thing twice,” Joffe says. Trust him. He’s been translating Kawakubo’s visions into reality for 27 years.