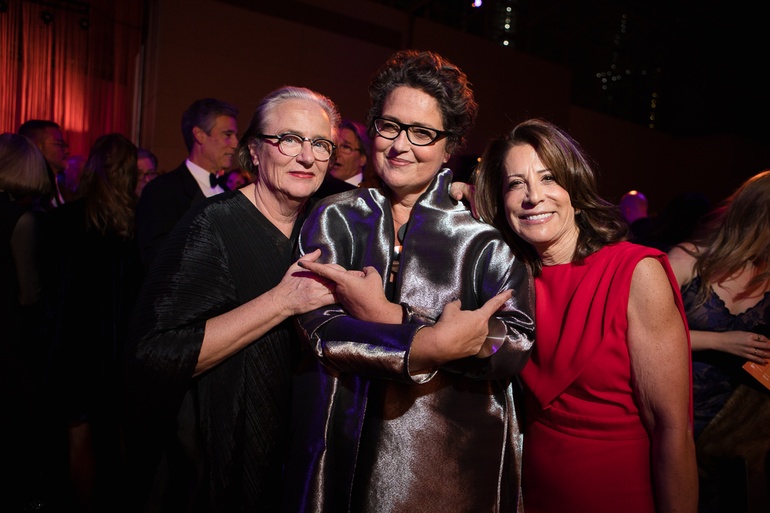 On November 30, Interior Design’s 33rd annual Hall of Fame awards lit up the I.M. Pei–designed River Pavilion at the Jacob K. Javits Convention Center, the event’s new home after more than three decades at the Waldorf Astoria. Editor in chief Cindy Allen kicked off the event with a unifying message before inducting the 2017 honorees.

“Tonight is all about we,” Allen proclaimed. “We the people of design.”

In addressing the new location, Allen acknowledged the fond memories of Hall of Fame ceremonies past, but celebrated this new chapter of the annual event. “This new venue represents a change,” she said. “But change is what we are, it’s our stock and trade.”

The ceremony honored five unique individuals who have made significant impacts in workplace, hospitality, retail, and residential design, and whose leadership and ingenuity will have lasting effects on the industry. The 2017 inductees are Robin Klehr Avia (Leadership), Peter Q. Bohlin (Architecture), Lidewij Edelkoort (Influence), and Mark Zeff (Design). In honor of his centennial, the venerated architect I.M. Pei was also given a special tribute during the ceremony, which was hosted in a building of his design.

Following Allen’s message of unity and camaraderie, the inductees all emphasized the power of togetherness to create and design the future. “I feel transported by what has happened here tonight,” Edelkoort said. “I hope I can continue to assist and be here for you all.”

Robin Klehr Avia celebrated the wide-ranging backgrounds and passions of design professionals as a source of the industry’s strength, saying: “It’s a diverse constellation of stars that drives innovation and creativity.”

Bohlin’s message was one of humility, reminding the audience that no designer is an island. “You depend on others, grow because of others, and that’s what our careers are about,” he said. “It’s an extraordinary life, and we’re all lucky to be in this profession.”

And finally, Mark Zeff suggested that at some point in the future Cindy Allen should be inducted into the Hall of Fame, saying with praise, “There is no one who has done more for this craft than her.”

The River Pavilion hosted 1,200 designers, architects, and other industry professionals dressed to the nines in Pei’s famed glass superstructure, recently renovated and expanded by FXFOWLE Architects. In addition to the new venue, the Hall presented by Sunbrella and Sunbrella Contract gave the gala a feeling of glamour and dynamism that set the tone for the rest of the evening. The impressive entrance experience, designed by Tsao & McKown, played with perceptions through strategically draped Sunbrella performance fabric and braid. The corridor expanded and contracted, drawing focus to the final destination banquet hall: a space to honor the most exceptional design in the industry.

Thanks to our 2017 sponsors, including Hall of Fame Diamond sponsor: Sunbrella and Sunbrella Contract for their support of the 33rd Annual HoF Awards.

> View our live broadcast of the VIP cocktail party