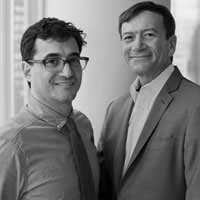 Alan Barlis AIA is a partner and co-owner of BarlisWedlick Architects, LLC, based in Manhattan and Hudson, New York. Barlis joined Dennis Wedlick Architect LLC—the firm’s name until it was changed in 2013—in 1997. Barlis’s background in urban planning was a great asset at a time when the firm was transitioning from single-family residential projects to multi-family and master planning commissions. Soon Barlis was named Managing Associate responsible for the firm’s production, quality control, and design standards; at the same time, he was lead designer on the firm’s largest and most complex commissions from Eastern Long Island to the outer regions of the Hudson Valley. In 2005, Barlis was named a Partner in the firm. Barlis’s early experiences of urban and suburban life shaped his understanding of the built environment and the crucial need for responsible development. He spent his childhood in a historic neighborhood of Boston before moving to Florida where he witnessed firsthand the conversion of once-rural areas into tracts of suburban homes. After studying urban planning at Brandeis University, Barlis joined the New York City Planning Department. Working on the Harlem Neighborhood Land Disposition Plan and Plan for Lower Manhattan, Barlis focused on residential conversion and the integration of open space. Barlis later returned to Boston where he received a Masters of Architecture from MIT. A frequent speaker at industry events, Barlis is also an instructor at the City College of New York. He is co-author with Dennis Wedlick of Classic and Modern: Signature Styles (2013). 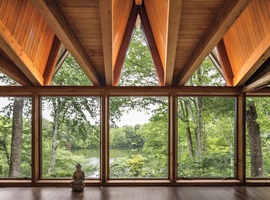 Private Retreat by BarlisWedlick: 2018 Best of Year Winner for Health/Wellness