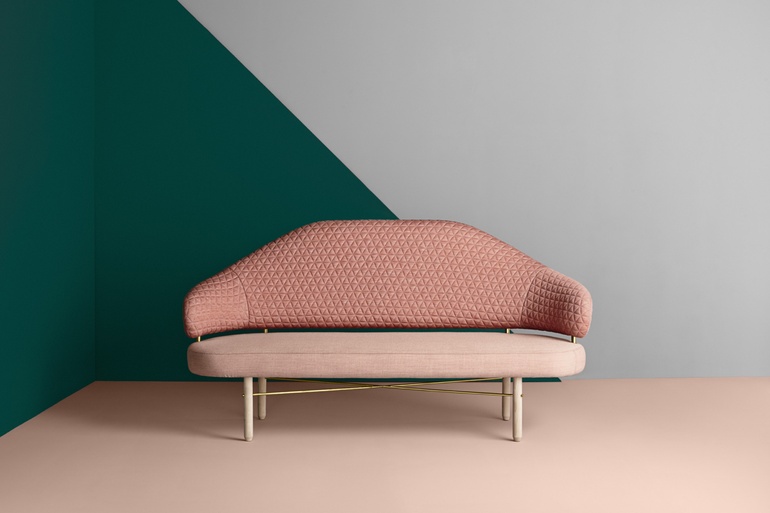 What defines a sofa that simply can't help but exude elegance? Highly original ideas currently on the market prove this is one theme that can't be (and shouldn't be) pinned down. The list of seven supremely elegant and recently launched sofas gathered here go beyond sleek gold-lacquered metal accents and gold powder-coated legs to include surprisingly innovative upholstery methods, eye-arresting patterns, a form based on a casually propped pillow, and more.

Gold-lacquered metal bars cheekily peek out between the suspended back and the base of the Simone Sofa by Spanish design studio Sputnik. Combined with wooden legs and upholstery in two colors and textures, Simone steals the show —making it worthy of its namesake, singer and pianist Nina Simone.

A propped-up pillow, elegant? Milan studio Skrivo takes this casual idea of lounging to an entirely different level. A changeable backrest has front seat billing in the Halo line—which also includes a single-seat armchair and a public seating system—and the result is supremely comfortable lounge furniture with the added perks of increased privacy and sound absorption.

Dichotomy in the form of two unified upholstery methods define prototype Stretch, unveiled by designer Roberto Paoli in Milan this past April. Offered through Seminato Mercadante, the brand Paoli founded, the sofa will only be produced by popular demand. According to Seminato Mercadante's business model, prototypes are put into production after a promise-to-buy system reaches a certain number of buyers.

Conceived specifically to showcase the award-winning Blocks and Grid textiles by Scholten & Baijings for Maharam—the textiles debuted in 2013 and are now part of the permanent collections of the Art Institute of Chicago and the Cooper Hewitt, Smithsonian Design Museum—Ottoman is both sofa and daybed. The upholstery boasts an eye-arresting geometric layering of patterns and colors, while the frame has a comfortably low seat height.

This mod custom update of the Rolled Arm Sofa, spotted recently at the Herman Miller National Design Center, was part of the exhibition "Lines, Grid & Blocks by Scholten & Baijings," on view during Milan Design Week. Ward Bennett designed Rolled Arm, with its sensually curved armrests, for Geiger in 1970, and, once again on this list, Scholten & Baijings adds a blast of upholstery sophistication—this time with Blocks 003 Blush for Maharam.

Open armrests seem to beckon from the solid wood and plywood rounded frame of the Diva Sofa by Staffan Holm. Launched along with an armchair by Swedish manufacturer Swedese, Diva can be upholstered in hues ranging from a vibrant fire-engine red to a more neutral beige; legs are offered in beech or oak.

A 2014 debut, the Stardust sofa by Slovenian product and interior designer Nika Zupanc shines again this year, with a savanna-inspired new upholstery option from the London-based manufacturer Sé—Zebra Silver Blue fabric by Turnell &
Gigon. The frame can be upholstered in both leather or fabric, while offerings for powder-coated steel legs include a shimmery gold, shown in the two versions here.