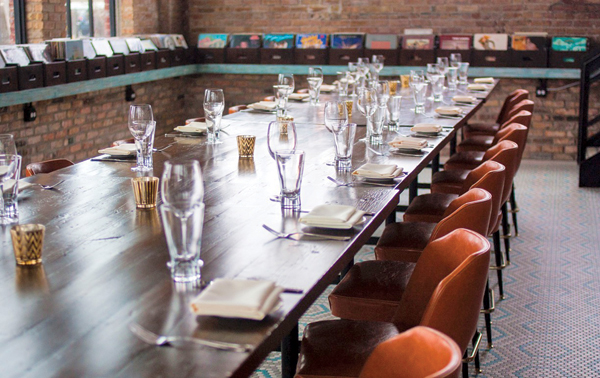 
It isn’t just showrooms that are in abundance during NeoCon. There are myriad dining options, too. Our annual roundup of hot spots helps with the decision-making—and your refueling. #IDneocon


<<Back to NeoCon Homepage

This seasonal American restaurant gets its name from the original architect of the building it’s housed inside, the landmarked Reliance Building, built in 1895 by Charles B. Atwood. But it’s BCDG Studio that’s refreshed the current interiors with appealing white subway tile and tufted black-leather banquettes. But the minimalism stops there. The menu serves up such homey flavorful classics as monkey bread, pan-seared chicken, and rhubarb upside-down cake.
1 West Washington Street; 312-368-1900.

After the success of its Wicker Park location, Footman Hospitality has opened a second outpost of this cozy beer hall. The name suggests the menu’s specialties—for the uninitiated, “bangers” is slang for sausage and “lace” for the veil of foam that clings on a stein—and there’s no shortage of either: eight choices of “dogs” and 32 beers on tap. Décor is typical beer-hall convivial: Bar stools line communal tables, taxidermy and sofas surround faux fireplaces, and old-time music crackles on the record player.
810 Grove Street, Evanston; 847-905-0854.

Plans for Marc Bushala’s new brasserie were well underway when he happened to see American Hustle. The film’s 1970’s aesthetics as well as the nostalgia he felt for the era’s food and drink struck him. So his plan took a left turn, and the result, he says, is “a dinner party on Warren Beatty’s yacht with Tom Jones entertaining and Julia Child cooking.” That translates to a setting awash in brass accents and kooky geometries. As for the menu, French classics, like steak frites, join dishes from what he calls the “decade that taste forgot”—think fish sticks, sloppy joes, fondue, even a TV dinner—finished with an A1 glaze of course.
401 North Morgan Street; 312-763-3316.

You might recognize this newcomer: It’s the 2015 James Beard Foundation Award for Outstanding Restaurant Design, which went to Bureau of Architecture and Design. Turns out, it’s a family affair. Principal Tom Nahabedian is a cousin of the chef, Carrie Nahabedian, and he outfitted the space in a serene arboreal theme ( brindille is French for twig )—think branchlike Lindsey Adelman light fixtures and walnut accents redolent of a forest. Of course, the cuisine is equally exquisite: lobes of foie gras, caviar atop Cortes Island oysters, sweetbreads with cocoa—and those are just the appetizers.
534 North Clark Street; 312-595-1616.

Looks old-school, but is actually quite post-modern. That’s pretty much the deal at this Italian joint. White-painted brickwork reads typical trattoria, but plumbing pipes fashioned into light fixtures and wallpaper patterned with dancing skeletons are more irreverent. That divergence from tradition also shines through in the pastas—truffle-flecked messinese topped with a sous-vide egg, charred-fennel tortellini sprinkled with pollen—all of which are made in-house and offered in sensible half portions.
1329 West Chicago Avenue; 312-818-2073. 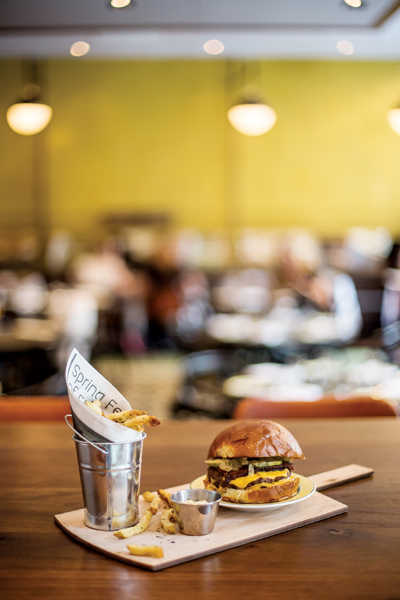 As the general public continues its fascination with culinary culture, a trade term has entered the layperson’s lexicon: the family meal, which is what’s served to employees before a restaurant opens for dinner service. When chef Roland Liccioni was tapped for this new brasserie inside the Hyatt Centric, he thought about the meals that made his colleagues in the kitchen happiest, thus the menu’s mix of comforting French classics, such as omelettes, French dip, and steak frites. Serving breakfast, lunch, and dinner. Photo at right by Mikelangelo Design.
100 West Monroe Street; 312-236-1234.


Community Tavern [ $ ]
Launched by Quay Tao and Joey Beato, this restaurant appreciates meat in all its forms. To start, there is roasted bone marrow or a terrine of short rib and oxtail. Entrees include bouillabaisse with smoked tomato or tuna crudo. Birdcage pendants, mismatched mirrors, and blue-velvet seating lend the steakhouse a shabby chic ambiance.
4038 North Milwaukee Avenue, 773-283-6080.

From the team behind the Publican and Nico Osteria comes this 41-stool diner. Walnut wainscoting, earth-tone tilework, the original tin ceiling, and a jukebox evoke a bygone era of Chicago, when legendary local eateries Sophie’s Busy Bee and Leo’s Lunchroom existed. This menu, however, a fusion of Southern and Mexican, is no typical greasy spoon. Fried chicken comes smothered in chorizo-verde gravy. The ham-and-cheese sandwich is flecked with cilantro and salsa. And everything can be topped with a fried egg.
1545 North Damen Avenue; 773-645-4060.

Should you really want to break away from the Mart, head on over to what’s referred to as “the edge of civilization,” aka West Town. Your palate should have that same sense of adventure, since nature dictates what’s on the menu. There are sausages made out of wild boar or venison, smoked beef-cheek tacos, and an entire section dedicated to alligator (hot fried gator legs anyone?). Saddle up to the generous wooden bar in the rustic main dining room, or kick back in the open-air beer garden.
1072 North Milwaukee Avenue; 773-772-4322.

Rich Melman has closed his successful L2O to recreate it into something between a pop-up and an established restaurant. Every two to three months, Intro will be completely reinvented—new design, new chef, new menu, new music. The current iteration features chef Erik Anderson (formerly of French Laundry and Noma—perhaps you’ve heard of those), who brings a six-course tasting to the table. Reservations encouraged.
2300 North Lincoln Park West; 773-868-0002.

American food writer Mary Frances Kennedy Fisher, aka M.F.K., serves as the inspiration for this cozy 28-seat establishment, which opened last July 3, the date of her birthday. It’s even adopted her mantra: “First we eat. Then we do everything else.” The interior could be interpreted as an homage to her California home: light and bright with whitewashed walls and blond wood tables. But the cuisine is Spain-influenced, mostly seafood and unpretentious.
432 West Diversy Parkway; 773-857-2540. 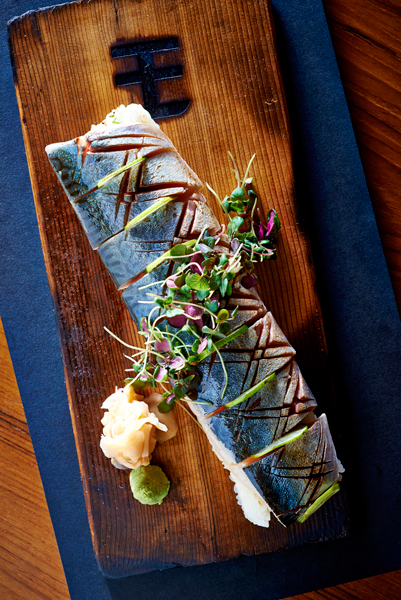 Momotaro [ $ ]
As far as Japanese restaurants go, this one breaks the mold. Its 11,000 square feet, designed by AvroKO, offers multiple dining experiences—from the sushi bar, set in the middle of the main floor, akin to a buzzing stock exchange, to a subterranean
izakaya, dedicated to craft cocktails and inspired by the back alleys of Tokyo. Food choices are equally diverse. The eight-page menu offers nigiri, robata skewers, and hibachi, among countless other options. Photo at right by Derek Richmond.
820 West Lake Street; 312-733-4818.

Actual parachutes hang in the windows of this spare yet warm, 40-seat family-run restaurant designed by Charles Vinz. Fitting, as the menu lands in a new fusion niche: Korean American, with hints of French, Moroccan, and Indian. That means boudin noir with raspberry vinegar, black udon with squid, and spicy beef hot pot with black radish, clams, egg, and wild fern. But the menu changes nightly.
3500 North Elston Avenue; 773-654-1460.

La Sociedad Rural Argentina, the annual celebration of culture and agriculture, is about to kick off in Buenos Aires. Chef Jose Garces has been, and has since used it as his inspiration for this steakhouse, the second outpost following one in Washington. Billowing canvas curtains reminiscent of fairground tents hang down from exposed rafters, while ephemera, photographs, and ribbons from the show fill the rustic space below. In addition to the menu’s steaks, cooked in the traditional grilled asado style, there are fugazza, a kind of Argentine focaccia, and pastas.
455 North Park Drive; 312-840-6600.

To the owners of this lounge and restaurant, Betty is a rockabilly Southern gal from the 1950’s. That translates to a dimly lit wood-paneled space populated with old records, vintage glassware, and a taxidermied peacock presiding over the retro cash register. Betty also knows how to mix a mean cocktail, flavoring them with house-made juices and syrups. Small plates like fried cauliflower and charred endive make it easy to stay late into the night—especially when the pianist starts knockin’ out good ‘ole rock ‘n’ roll.
839 West Fulton Street; 312-733-2222.

<<Back to NeoCon Homepage