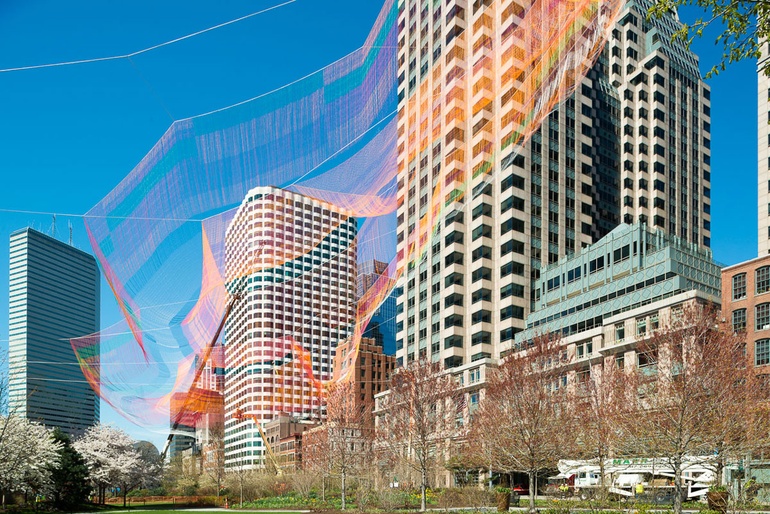 Boston-based sculptor Janet Echelman, recipient of the 2014 Smithsonian American Ingenuity Award in Visual Arts, was selected from a pool of 97 artists to create an installation for her hometown. On display from May to October 2015 in the city's Rose Fitzgerald Kennedy Greenway park, “As If It Were Already Here” is a 2,000-pound, half-acre-sized aerial sculpture made of hand-sliced rope and more than half a million knots.

Led by Shawmut Design and Construction, a team including Arup and Autodesk collaborated with Echelman, the Rose Kennedy Greenway Conservancy and the city of Boston to plan and execute the installation, essentially the hanging of a net up to 365 feet above ground, spanning 600 feet over a mass transit tunnel. Given what lay below, distributing the weight of the cranes was of upmost importance.

“Installing this sculpture was as complex as building a high rise,” says Micah O’Neil, senior project manager, Shawmut. “Structural ironwork isn’t known for being delicate in nature, but since this was such a unique project we approached the preconstruction and construction as if it were a part of the art itself.”

The traffic-light colored sculpture’s fibers are 15 times stronger than steel. It was built to withstand 50,000 pounds of force from winds up to 105 miles per hour, and is attached to four points on three buildings surrounding part of the Rose Kennedy Greenway: One International Place (office), 125 High Street (office), and the InterContinental Hotel. This is the land of the Big Dig. An elevated highway was once here.

“This configuration allows for the correct forces to be exerted on both the buildings and the sculpture. This ensures the attachment points are structurally sound as well as allows the sculpture to hold the designed shape,” says O’Neil. The initial design called for five points but throughout the five months of planning the team was able to minimize the number, resulting in greater efficiency.

“We worked with the crews from [subcontractor] Daniel Marr & Son to ensure all attachment points were welded to perfection and orchestrated six cranes in unison to carefully lift the net to guarantee proper draping and maintain the structural integrity of the sculpture.”

This was the first project of its kind for the $968 million national construction management firm. Determining the force needed for each attachment point to ensure the sculpture’s wind resilience was vital to the success. Careful planning meant there were only a few minor surprises on install day. Namely a steel column was facing 90 degrees from the direction anticipated at a connection point.

To weld the steel to create the pre-determined attachment point a modification was made to the connection piece, ensuring the sculpture was structurally sound, and hanging as intended.

Shawmut also worked with Lumenpulse Lighting to install 44 individually-programmed custom LED lights to illuminate the art at night. The de-install will be the same process, in reverse. 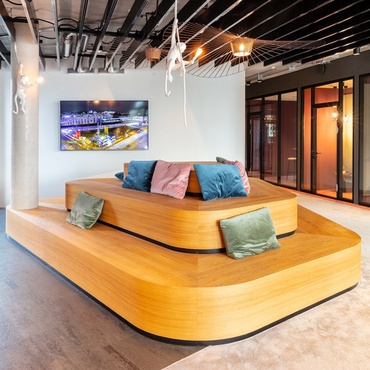 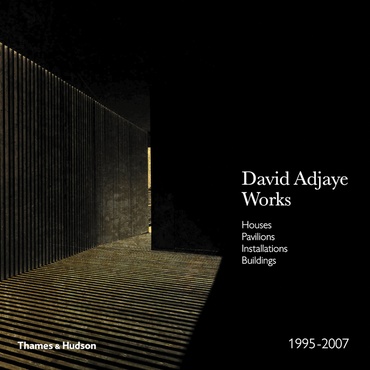