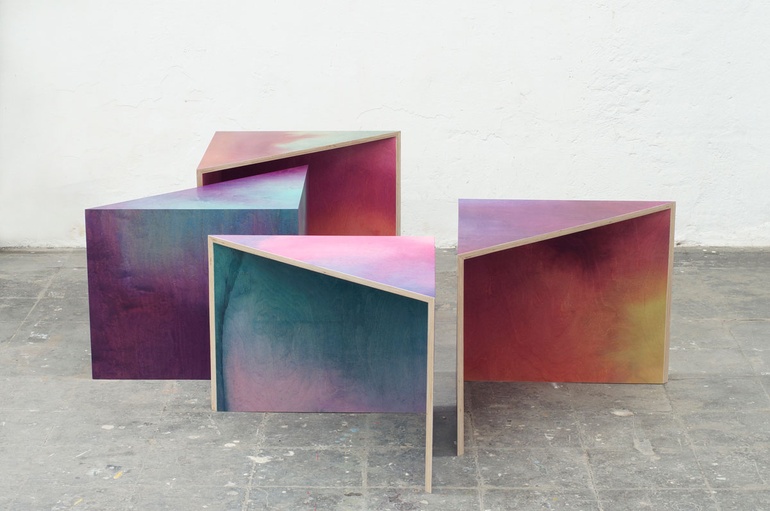 We’re calling it—these young talents are about to steal the spotlight. In its 18 years at the fairgrounds of Milan's annual Salone del Mobile, the Salone Satellite has exhibited the work of over 10,000 aspiring designers. This edition alone featured 700 talents under the age of 35 from around the world, all hoping to have their prototypes seen—and ultimately produced—by the many furniture and lighting manufacturers based in and around Milan. Famous Satellite alumni include 31-year-old Norwegian Daniel Rybakken. He exhibited three times (the maximum number of times one can show at the Satellite) from 2008 through 2010, and last year won a prestigious Compasso d'Oro prize from the Italian Association for Industrial Design (ADI) for his Counterbalance lamp, first exhibited at the Satellite and now part of Italian lighting giant Luceplan's collection.

The 18th edition showcased a number of interesting new material-driven projects courtesy of the design world’s rising stars. German designer Meike Harde has created Wooden Aquarelle, a furniture series with vibrant, inky surface patterns inspired by watercolor paintings on canvas. The collection’s wooden panels are mounted in frames before being covered with a layer of liquid pigments that are absorbed into the grain, resulting in multicolored, one-of-a-kind surface patterns.

Dutch designer Robert Van Embricqs’s Rising Light is made from laminated bamboo, cut to allow strips to rise up from a flat surface for a striking latticework. And Joa Herrenknecht used salmon skin, an environmentally friendly alternative to cow leather, to upholster her oak Nani bench. Surprisingly soft (and odor-free) salmon leather is a by-product of the fishing industry that’s more flexible and stronger than its bovine counterpart, and it can be dyed into various different shades.

The intriguing texture of Philipp Käfer’s ReTree furniture is achieved by mixing colored wood chips with a binding agent before pressing them into a metal mold. Käfer has used the technique, essentially a new way of working with chipboard, to create a series of coffee tables shaped like sliced tree trunks and an angular shell seat.

Made up of ECAL graduates Giula Chéhab, Micael Filipe and Romain Viricel, E7 Industrial Design presented a series of furniture pieces made from galvanized steel. Called the Zinc Project, E7’s indoor furniture seeks to transform people’s perceptions of the industrial material, which is often overlooked in furniture design. Instead, the steel’s crystalline surface pattern is showcased on tabletops, curved table legs and shelf brackets.

New German brand Out For Space showcased furnishings all made from a new material called Karuun, a type of rattan that has been injected with bulking agents to make it firmer, harder and more weather resistant. Most eye-catching were the five stained Karuun Color pieces, which skillfully fused different colors and cuts of Karuun into a bench, LED lamp, wall clock, coat rack and a set of geometric toy blocks.

And finally, by using a traditional craft from her native Siberia to create new contemporary objects, Russian designer Anastasiya Koshcheeva hopes to bring a renewed focus to birchbark. Harvested from Siberian birch trees the flexible, water-repellant and antibacterial bark has been used by Koshcheeva to make an armchair, stool and a series of storage containers.