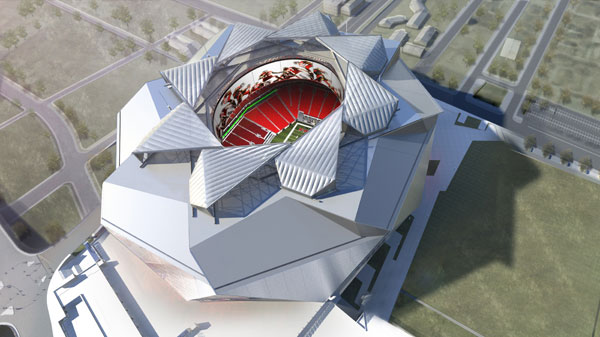 The design for the New Atlanta Stadium features a retractable roof that provides a radical departure from the kinetic roofs of other sports facilities. Photography courtesy of HOK.


In January, St. Louis-based design, engineering, architecture, and planning firm HOK completed its acquisition of 360 Architecture , a leading arena and stadium design and architecture firm. The terms of the massive merger were not disclosed.


It’s not the first time the firms have collaborated. Most recently, HOK and 360 teamed up for planning the St. Louis National Football League riverfront stadium.


HOK president Bill Hellmuth notes that the two firms also worked together on a joint response to several potential clients when it became apparent they should fully fuse. “It didn’t take long for both sides to see the incredible advantages of this combination and the cultural fit,” he explains. “Since announcing the agreement last August and finalizing it in December, the benefits for the clients and employees of both firms have become more and more obvious to all of us.”


Looking ahead, he notes that HOK’s continued growth improves its ability to collaborate across specialties, markets, and locations—and to augment urban planning through the marriage of athletics and architecture. “We’ve always known that we wanted to get back into sports architecture with a firm that was a good fit—one that shared our collaborative culture and goals for great design,” he explains. “360 was recognized as a world leader in using the design of sports and entertainment venues as an opportunity to spur urban development. With stadia and arenas hosting more entertainment events, they can act as catalysts to invigorate urban districts and attract people to a specific region.”


HOK is ranked among Interior Design ’s Top 100 Giants . Thanks to the merger, it will grow even mightier, extending its reach through new general architecture practices in Kansas City, Missouri and Columbus, Ohio. 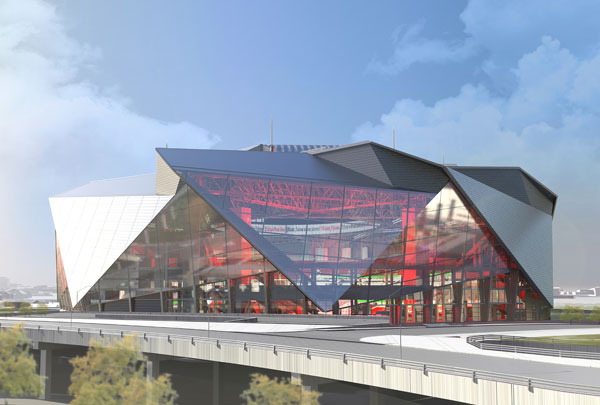 Derived from the shape of a falcon’s wing, the roof features eight triangular panels that wrap the stadium and move in unison along individual tracks. Photography courtesy of HOK.