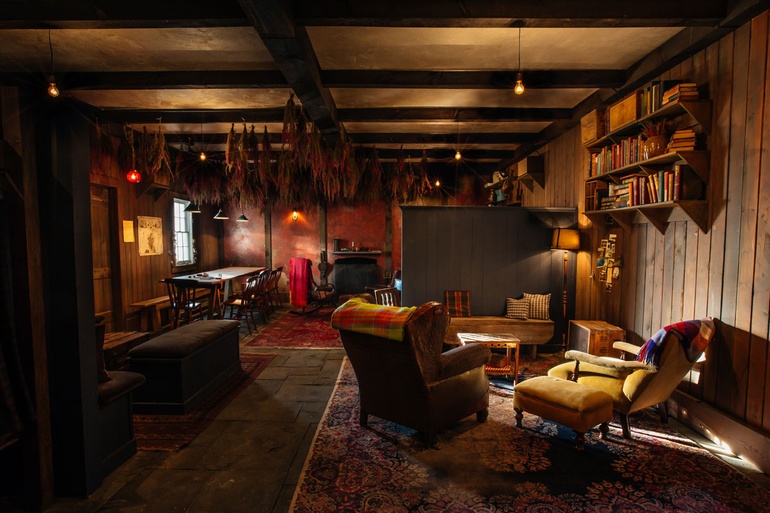 A gabled roof stretches out over the slate tiles of one storied New York rooftop to form a cabin warmed by a synthetic fire and modeled after “bothies,” small hovels in the mountainous regions of Scotland where travelers could take refuge for the night. Welcome to The Lodge at Gallow Green, the latest addition to New York’s McKittrick Hotel.

It's been nearly four years since the hotel welcomed its first guests into the world of Sleep No More, the interactive, pitch-noir Macbeth adaptation staged by the London theater group Punchdrunk and spearheaded by its founder Felix Barrett. Originally occupying three Chelsea warehouses, a total of 100,000 square feet, the immersive show has since expanded beyond these walls to include a restaurant called The Heath as well as a rooftop bar, Gallow Green, for the warmer months.

“We imagined The Lodge to be the farthest extent of the world of Sleep No More, a little secret, a refuge from New York.”

The Lodge extends from Gallow Green’s train dining car to create, perhaps due to this imagining, a bar that feels more like a home with several distinct nooks: a bedroom lined with bookshelves, a small study, a space with two bunk beds, a communal dining table. After wandering through a small forest of evergreens in the back, there’s even what appears to be a furrier’s tent with a canoe.

In keeping with the narrative, the bar is replete with the clutter of travelers past: mismatched tartan blankets, forgotten clothing, books on disparate topics, handwritten letters and sheet music, vignettes filled with pressed flora. Carpets are worn to the point that the ornate patterns are barely recognizable. A noticeable layer of dust lies on the mantle and the shelves. “It has a life even without people in it,” associate designer Livi Vaughan remarks. “We imagined The Lodge to be the farthest extent of the world of Sleep No More, a little secret, a refuge from New York.”

Beyond the furnishings and finishes sourced from thrift stores and antique shows, moody lighting and jazzy 1940s tunes set the tone. Musky scents linger in the air, and mulled wine simmers at the bar. Capping capacity at about 75, the atmosphere remains light and convivial. The senses are convinced that this cannot possibly be a rooftop in industrial Chelsea, but rather some mysterious meeting point for world-weary city dwellers. As Vaughan says, “It doesn’t belong to any one person—you walk in and feel at home.”

But as with many of the experiences created at the McKittrick Hotel, The Lodge is ephemeral and fleeting. Come the end of March, the rooftop will revert back into Gallow Green.