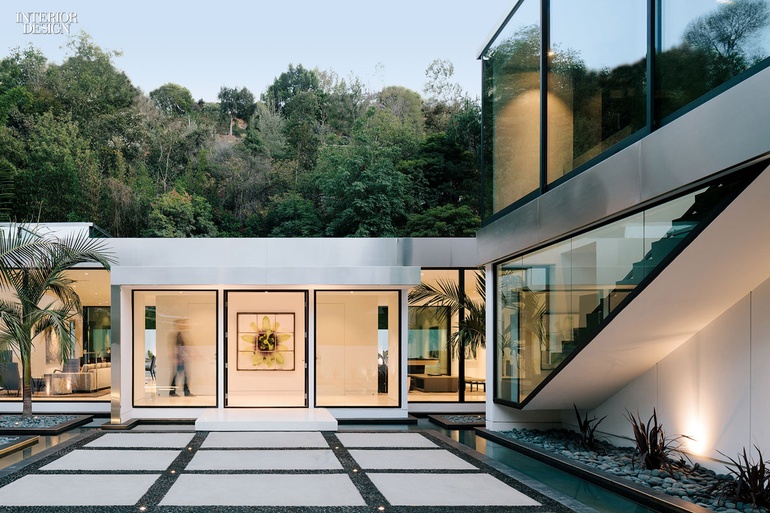 We know the work. Its scope has ranged from refined contemporary to downright daring. But what about the man himself? Until now, Hagy Belzberg has opted to let his projects speak for themselves.

Born in Tel Aviv, it turns out, he moved to Los Angeles at age 3, when his engineer father was recruited by an aerospace company there. The job was a bit clandestine, involving high-level security clearance. “I never saw where he worked or met his peers,” the younger Belzberg says. His mother, a trained psychologist, made her career as a sculptor. As he notes, “It was left-brain, right-brain from the get-go.” 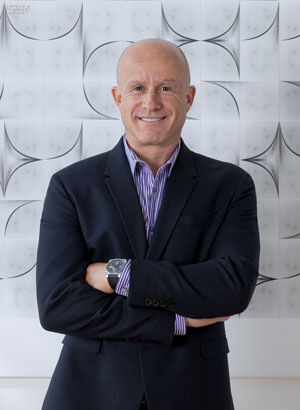 Cognizance of architecture came young, he adds: “I was an out-of-control kid. The only way my mom could calm me down was to give me stuff to build.” Or take him to museums: “I was captivated by the spaces, the sound, the light, the people.” His calling became official at Arizona State University, where he earned an undergraduate degree in architecture, then at the Harvard University Graduate School of Design.

During the summers that he interned at Frank O. Gehry & Associates , he worked on models for Spain’s Guggenheim Museum Bilbao. Independent prestige came three months out of grad school, when he completed his first residence, for a Walt Disney Company executive. Carved into a hillside, the house landed in the New York Times . More commissions followed, and they never stopped. He founded Belzberg Architects in 1997. His mantra was “architectural innovation,” first put into play with CNC fabrication, then new to the profession. CNC-milled paneling appeared at his Patina restaurant at the Walt Disney Concert Hall and his founders’ room at the Ahmanson Theatre .

More public projects came in rapid succession. Fiberglass undulated through the entry for the Lab at Belmar , a Colorado cultural venue. Back in L.A., he resuscitated the Conga Room with a ceiling installation of lipstick-red triangles assembled in a pattern inspired by the rumba—they are not only sexy but also help control acoustics. More solemn and even more memorable is the Los Angeles Museum of the Holocaust . Belzberg placed it belowground, in a park, and in doing so created a poignant experience that takes visitors on a nonlinear route beginning and ending with daylight. That audacity won him AIA Honor Awards for both architecture and interiors.

He makes strong statements on the residential scale, too. With zinc and stacked limestone, he achieved a stunning exterior composition for a Toronto house. In warmer Kona, Hawaii, he employed lava stone as the primary construction material for a massive residence, its latticework entry gazebo a nod to the local custom of offering visitors a fruit-filled basket. He also designed a manly bachelor pad for himself: an asymmetrical glassy volume perched precariously on a Hollywood Hills ridgeline. Then, halfway through construction, he met TV executive Jane Segal. He finished that house, but they got married and never lived in it.

“I was an out-of-control kid. The only way my mom could calm me down was to give me stuff to build.” Or take him to museums: “I was captivated by the spaces, the sound, the light, the people.”

Recent work from his firm, now 24 strong, continues to dazzle. He upended the conventional educational model with an academic building at Occidental College , eschewing blackboards and bulletin boards for the slumped glass and printed vinyl of what he calls a “digital Post-it wall.” It’s kinetic, interactive—a magnum opus of technology. Proof positive of his ongoing experimentation with form and pattern, the glass-vinyl combo returned for the showstopping facade of a venture-capital firm, the Gores Group .

Current projects are taking him out of his zone. He’s designing two office buildings and a hotel in Mexico, his first commissions there. He also took on the role of developer by purchasing a long-vacant L.A. property to sub-divide in three. His firm’s studio went up on one lot, a house for himself, his wife, and their two children on another. The third component, a spec house, sold while still under construction. The buyer? His Mexican client, who thought the place would make a perfect stateside pied-à-terre.