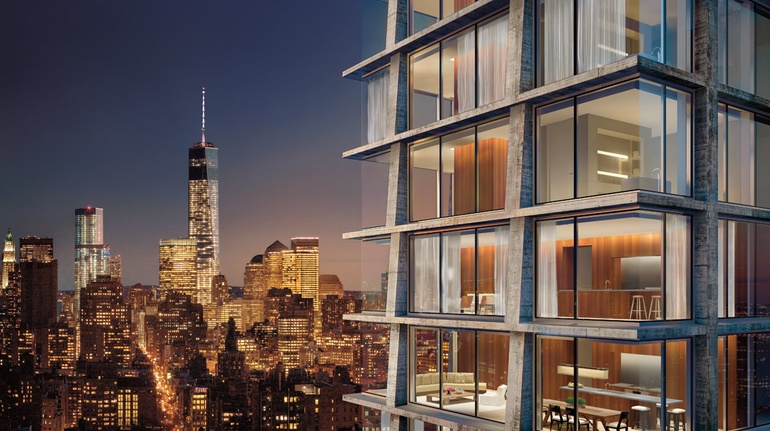 Ian Schrager Company has released plans for its latest project: 215 Chrystie, a hotel and residential building set to open in Lower Manhattan in 2016. The architectural firm Herzog & de Meuron has been tapped to design the 28-story building, which will feature a 370-room hotel and topped with 11 custom residences designed by British interior designer John Pawson, who’s known for his minimalistic design aesthetic.

This is not the first time the Ian Schrager Company has collaborated with Herzog & de Meuron. Previously, the two firms worked together on 40 Bond, an ultra-modern residential building in New York City’s NoHo neighborhood.

“Herzog & de Meuron is not a firm that works in one vernacular or has one look that they continue to refine, says Schrager, founder and chairman of the company. “Instead, each project is approached in a fresh and original way with a novel solution. That’s why they were perfect to do 215 Chrystie.”

The building will be comprised of raw concrete both inside and out, and will feature custom floor-to-ceiling windows set between concrete columns and slabs for unobstructed views of the city. According to the Ian Schrager Company, “The windows [will] tilt toward the sky to create more interior space and increase the reflection of the sky in the glass, while allowing for more privacy.”

“I’m excited about the whole project and every aspect of it,” Schrager says. “Whether it’s the building, the hotel, the public space, the rooms, the residences, the finishes and details, each and every one of them was really a thrill for me to be involved with. It’s the totality of the experience of each residence at 215 Chrystie that makes it unlike anything else in the marketplace.”