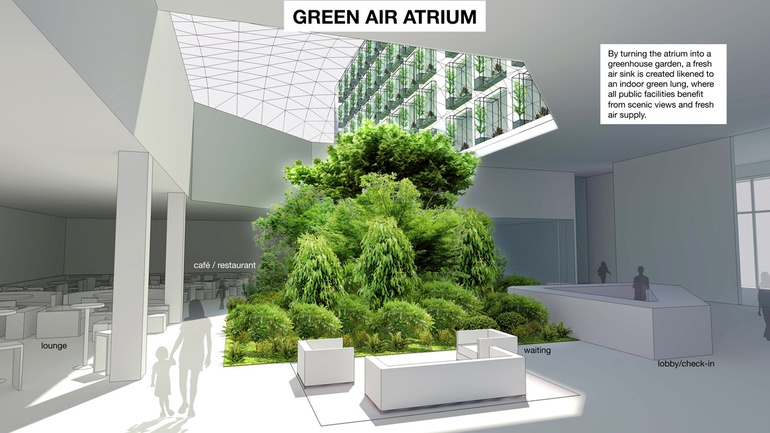 Beating out nearly 100 entrants from 28 countries, Singapore-born architect Lip Chiong won first place in this year’s Radical Innovation in Hospitality Award competition for his design proposing to use extensive plantings to reduce indoor air pollution in China’s hotels. The 38-year-old architect, principal of Shanghai design firm Studio Twist, received the award in May at the Hospitality Design Expo in Las Vegas.

The design promises not only to help refurbish China’s out-of-date hotel properties but also to purify their air. “This is a shining example of a winning formula that revitalizes old, dilapidated hotels, overhauls the foundation of how hotels should be designed, and offers a solution to a current environmental crisis,” says John R. Hardy, president and CEO of development firm, The John Hardy Group, and founder of the Radical Innovation Award.

Ever since overtaking the U.S. in 2006, China has been ranked the world's worst polluter. The Environmental Protection Agency says air ranked above 300 is hazardous to human health, and Chinese cities often experience toxic air readings far exceeding that level. And indoor air pollution can be 2 to 5 times—and occasionally more than 100 times—higher than that found outdoors, the EPA says.

Chiong’s concept envisions hotel plants to purify rooms in the same way they cleanse the natural environment. There, plants absorb carbon dioxide during photosynthesis, then release oxygen into the atmosphere. To calculate the correct number of plants needed to purify the air, Chiong used a method developed by retired NASA scientist Dr. B. C. Wolverton. Greenery would be chosen according to its placement around the hotel, with vertical panels requiring less light reserved for corridors, while plants requiring more light would adorn guestrooms and lobby areas.

Overall, says Chiong, his plan will result “in a natural and rejuvenating hotel experience.”