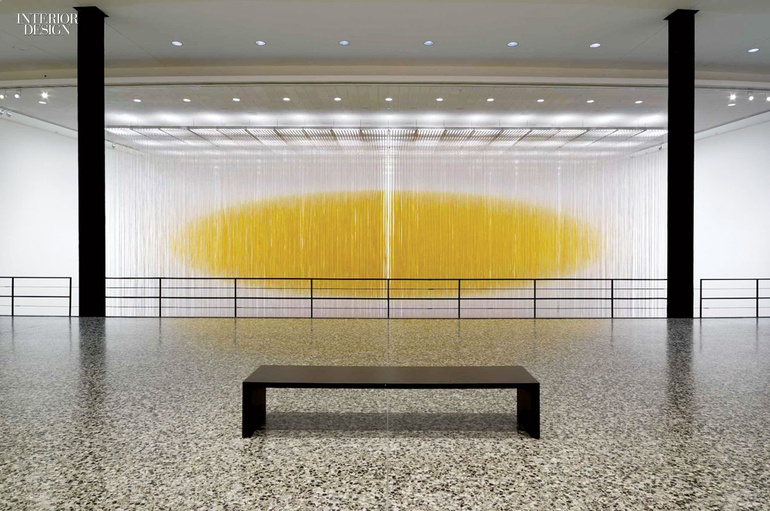 The fourth dimension was what Jesús Rafael Soto, a leader of the kinetic and op art movements, was in constant search of. He once described his mission as “trying to represent movement, vibration, light, space, time, things that exist but which do not have a determined form.” His quest took him around the world. Starting in 1967 in Paris, the Venezuelan artist created temporary installations that surround viewers with dangling strands. This series of ethereal works came to be known as Penetrables.

In 2004, the Museum of Fine Arts, Houston, commissioned Soto: The Houston Penetrable. Plans for it were completed only weeks before Soto’s death, as it turned out. So the museum asked Atelier Soto’s long­time collaborators architect Paolo Carrozzino and La Voie des Arts fabricator Walter Pellevoisin to make the vision a reality. The only one of Soto’s works intended to be permanent, it will periodically reappear at the museum.

The installation comprises thousands of PVC tubes. First, at La Voie des Arts in southwestern France, some of them were sprayed with yellow ink in sections—more on that later. The yellow-sprayed tubes, method­ically numbered, were then wound onto spools and packed in crates for shipping to a Houston art storage facility. There, the daunting two-month task of meticulously tying the strands onto grid-form modules began. When the modules were ultimately bolted to the ceiling of a double-height gallery at the MFAH, the yellow sections created an ellipse hovering at the center of the 2,600-square-foot mass.

This golden apparition, on view for its debut through September 1, could be interpreted as a sun either rising or setting. Carrozzino recalls, “At the moment the last tube was hung, it was as if we lost Soto and also regained him.” The strands tremble as visitors amble through the sculpture. Perhaps this is where Soto’s fourth dimension lies.