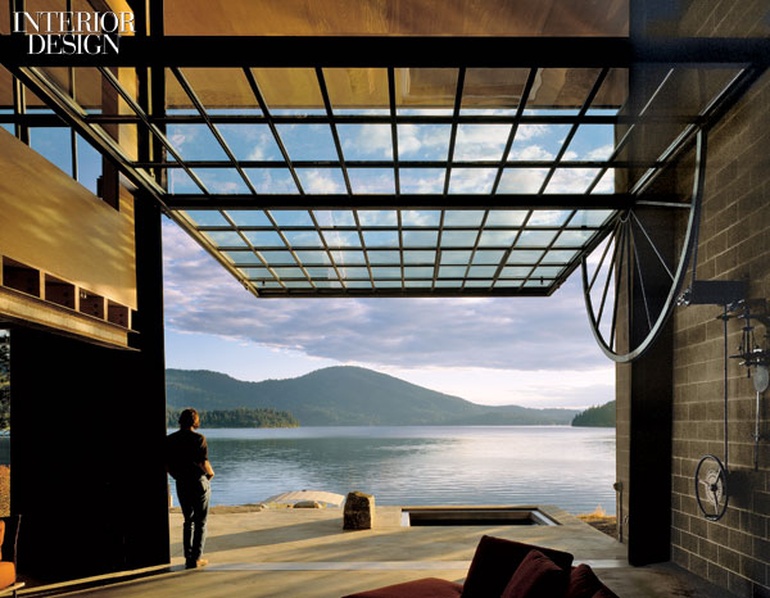 In large part due to Jim Olson and Tom Kundig, Seattle has become an outpost of world-class design. Professional partners since 1996, the two have amassed an enviable portfolio. Their projects span continents, encompass almost every genre, and have been richly lauded; AIA’s 2009 Architecture Firm Award is one among more than 150. Yet over the course of their lifetimes, nothing has influenced Olson and Kundig as much as their roots in the Pacific Northwest.

Olson’s response to the Seattle connection: “Look out the window.” A half-block away from the eponymous studio’s headquarters stands the building where he started his career at age 23 and launched a private practice two years later. A native of Enumclaw, a tiny town in the shadow of Mount Rainier, approximately an hour southeast of Seattle, Olson recalls spending his childhood as a solitary thinker. Later, he earned a bachelor’s degree in architecture from the University of Washington.“I was in too much of a hurry to start working,” he says when asked why he eschewed graduate school.

Raised in Spokane, surrounded by the rugged landscape of the Washington/Idaho border, Kundig’s DNA is steeped in design. That his father is an architect was at first a deterrent. Kundig was more interested in science, particularly physics. Right-brain stimuli came from“the nutty group of artists” who were family friends. “I knew I’d never be an artist,” he says,“but I sure appreciated what they brought to the party as provocateurs and iconoclasts.” He eventually succumbed to architecture—“the intersection of rational and poetic”—earning undergraduate and master’s degrees also from the University of Washington . Ironically, it was his father who approached Olson at a lecture, which ultimately connected the two eventual partners. Kundig began employment at the then called Olson Sundberg Architects in 1986.

The 100-strong Olson Kundig Architects , formed in 2010 and including Kirsten Murray and Alan Maskin as co principals, counts approximately 75 percent of its work as residential. Each project is spearheaded by one of the four principals. Kundig’s houses are often simple in geometry but always gutsy, usually incorporating massive moving parts. For instance, cabin she’s designed in northern Idaho and Mazama, Washington, have pivoting walls that open up entirely to the outdoors via a hand crank. Says Olson of Kundig: “With his physics background, Tom makes innovative and smart architecture that looks to the future.”

Olson’s residences, on the other hand, are more classical and refined, befitting the art collectors who comprise much of his clientele. One in Bellevue, Washington, cohesively incorporates an ethereal James Turrell installation and a hefty steel sculpture by Richard Serra . Kundigon Olson: “In Jim’s projects, the proportions of the art, furniture, and landscape combine to almost suspend materiality into a magical realm.”

Farther afield, Olson has residences in Bedford, New York; Lugano, Switzerland; and Mumbai, India, on his boards, while Kundig has dwellings in Manhattan, Geneva, and Buenos Aires on his. All this work has led to the firm launching a studio in 2000 devoted specifically to interiors. It currently counts six designers, involved in every project. Those projects, other than residential, include the Bill & Melinda Gates Foundation visitor center in Seattle, JW Marriott Los Cabos hotel in Mexico, and offices in Asia. At the opposite end of the scale spectrum is the 2012 debut of the Tom Kundig Collection of steel hardware.

Recent commissions include a number of cultural institutions as well: The Whatcom Museum ’s Light catcher building in Bellingham was Olson Kundig’s first ground-up museum, a LEED Silver–certified one at that. Several others have followed, and the firm is currently adapting a former Tacom a warehouse into the 45,000-square-foot Foss Waterway Seaport , set to be the West Coast’s largest maritime heritage center when it opens in 2015. Further proof of their ties to their surroundings, last year the two principals launched [storefront] Olson Kundig Architects: an experimental space hosting performances and exhibitions on the ground floor of their 1892 office building.