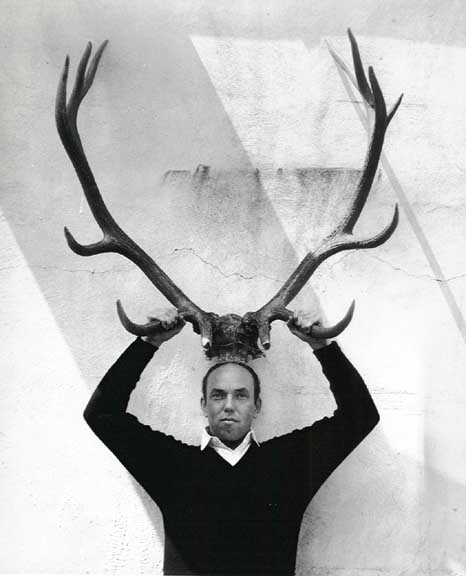 Photo courtesy of www.tonyduquette.com.
How does one condense a Curriculum Vitae whose entries include a Tony Award for best costume in an original production of Camelot , a dozen major museum exhibits on both U.S. coasts and in Paris, a roster of private clients listing the likes of J. Paul Getty, Mr. And Mrs. Norton Simon, Doris Duke and The Duke and Duchess of Windsor, corporate commissions covering the Ritz Carlton Hotel in Chicago, Music Center of Los Angeles, Sheraton Hotel Corporation, and still more costumes and sceneries for films, operas and ballets bearing universally famed and favored titles?

The question is rhetorical, but the protagonist was real: Anthony Michael Duquette, born in California and thereafter dividing his early years between his home state and Michigan. A graduate of the Chouinard Art Institute, he was "discovered" in the mid-1930's by interior design pioneer Lady Elsie de Wolfe Mendl, who, with Sir Charles Mendl, bestowed the patronage that helped launch Duquette's creative career. He served in the U.S. Army in World War II, honorably demobbed after four years, then resumed his theater and cinema work. In 1949, he married Elizabeth "Beagle" (a contraction of the busy bee and soaring eagle) Johnstone, a talented artist in her own right and reportedly very beautiful to boot. Their collaborative ventures led to assignments in Europe, South America, the Orient and all over the United States. In 1979, they formed the Anthony and Elizabeth Duquette Foundation for the Living Arts, a non-profit enterprise dedicated to the promotion of outstanding art to the public. Untold numbers of special exhibits and presentations furthered the same cause. In 1989, the Duquette Pavilion, containing the craftsman's sculptures and other works of art, was totaled by a fire; four years later, his "modern Shangri-La" in the Malibu mountains also fell victim to flames. And in 1995, his Elizabeth died.

A show opened at Bergdorf Goodman in New York City that focused on a collection of 18k gold jewelry, precious stone-set objects and furniture reflective of Duquette's product lines developed in conjunction with business partner Hutton Wilkinson over the past 32 years. Though Duquette passed in 1999 at the age of 85, his reputation for things glamorous and magically alluring remains.