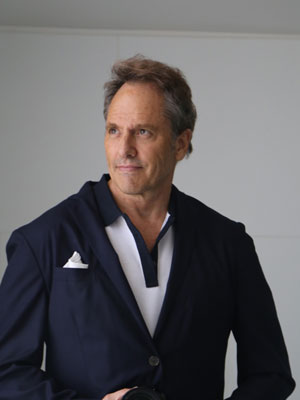 No project better epitomizes the grand chameleon like talents of Peter Shelton and Lee Mindel than the 170,000-sq.-ft. headquarters for Polo/Ralph Lauren. At the core of one of Madison Avenue's most banal office towers, the architects installed a soaring lobby that surpasses even Lauren's blue-blood fantasies. The interior's Anglophilic dress-walls swathed in Black Watch tartan, a vast mahogany staircase, worn leather sofas-would be impossible for lesser talents to pull off without seeming ironic. Where did they find all those ancestral portraits?

The lobby's mahogany-paneled perimeter, however, marks the boundary between old England and modern New York: Shelton and Mindel outfitted Polo's library and design studios with the clean lines, planar surfaces and neutral palette that seem more their style. Yet for all their apparent differences, the two spaces represent an unwavering penchant for detail. "Our design process exploits the characteristics of the methods and materials employed," the architects note. "The design of a rug should reflect how it is made, not just an applied pattern. A light bulb should look like part of the fixture, not just an attachment."

Mr. Shelton and Mr. Mindel formed a design partnership only a few years after college. Both architects began their studies at the University of Pennsylvania; Mr. Shelton graduated from Pratt Institute in 1975, then joined the New York offices of Edward Durell Stone & Associates and later Emery Roth & Sons. Mr. Mindel graduated from Harvard University in 1976 and also headed for New York, where he worked first for Skidmore, Owings & Merrill and then Rogers, Butler, Burgun.

Since the formation of Shelton, Mindel & Associates in 1978, the architects have strayed from the dictates of their modernist training to avoid the trappings of a signature style. Their formal explorations steadily oscillate between the twin poles of "modern" and "traditional," directed in each cast toward a carefully wrought simplicity. As they put it: "The fewer number of words it takes to describe the concept of a project, the better."

The firm is the recipient of many awards including sixteen AIA awards, three design awards from the Socity of American Registered Architects to mention a few. The American Institute of Architecture, San Francisco, Museum of Fine Arts, National Academy of Design and Houston Museum of Fine Arts have exhibited the firms work in both traveling and permanent exhibitions.