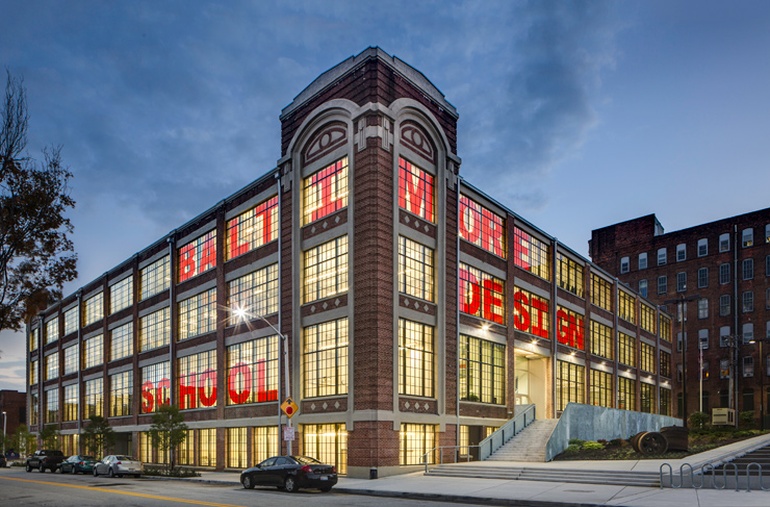 Miami's Design and Architecture Senior High provided a basis for the Baltimore curriculum, which currently services grades six through nine, with the following three grades set to join the high school in the next three years. The school has received so much buzz since its opening in 2011 (at a temporary location) that middle school admission is decided by a lottery and high school admission requires a portfolio review. Hopes run high that the Baltimore Design School will help revitalize Baltimore’s Station North Arts and Entertainment District. And it's true that, since construction began two years ago, housing prices have doubled.

The school's 100-year-old structure was built in 1914 as a bottle-cap factory for the Crown Cork & Seal Company, after which it was leased to Lebow Brothers Clothing Company in 1950 and then, after 1985, left abandoned for decades. Ziger/Snead remained as true to the original space as possible, preserving concrete columns and cracked cement floors, while an old freight elevator became an art gallery.

Architectural additions were kept clean and modern, emphasizing the difference between old and new. The exposed infrastructure, high ceilings and expansive windows create a blank slate for students to design and personalize. A public-private financing lease to the Baltimore City Public School System did not fund furniture and equipment, but the design community has provided generous donations.

Similarly, Adobe Systems has adopted the school as a national model for education, providing complimentary software and training for the students and teachers. As a result, young creative minds are now hard at work in a structure right next door to the Copycat Building, a local artists' loft community, reminding students that their creative aspirations will soon enough shape the future of design.